As we enter the winter months, the latest ‘The Pulse’ survey indicates that merchants’ expectations and confidence are cooling. However, the overall outlook remains positive with merchants particularly confident in their own business.

At the time of interviewing, the Government’s announcement on a new one-month lockdown (and extension to the furlough scheme) had not yet happened, although the risk of another lockdown and managing a second wave of the virus was already weighing on merchants’ minds.

The Pulse, by MRA Research, is a monthly tracking survey of merchants’ confidence and prospects. Telephone interviewing took place between 1 and 7 October.

Over 90% of merchants say all or most of their suppliers are able to supply them — Chart 1. But there are longer lead times and stock shortages of some materials, particularly plaster, timber and bricks. 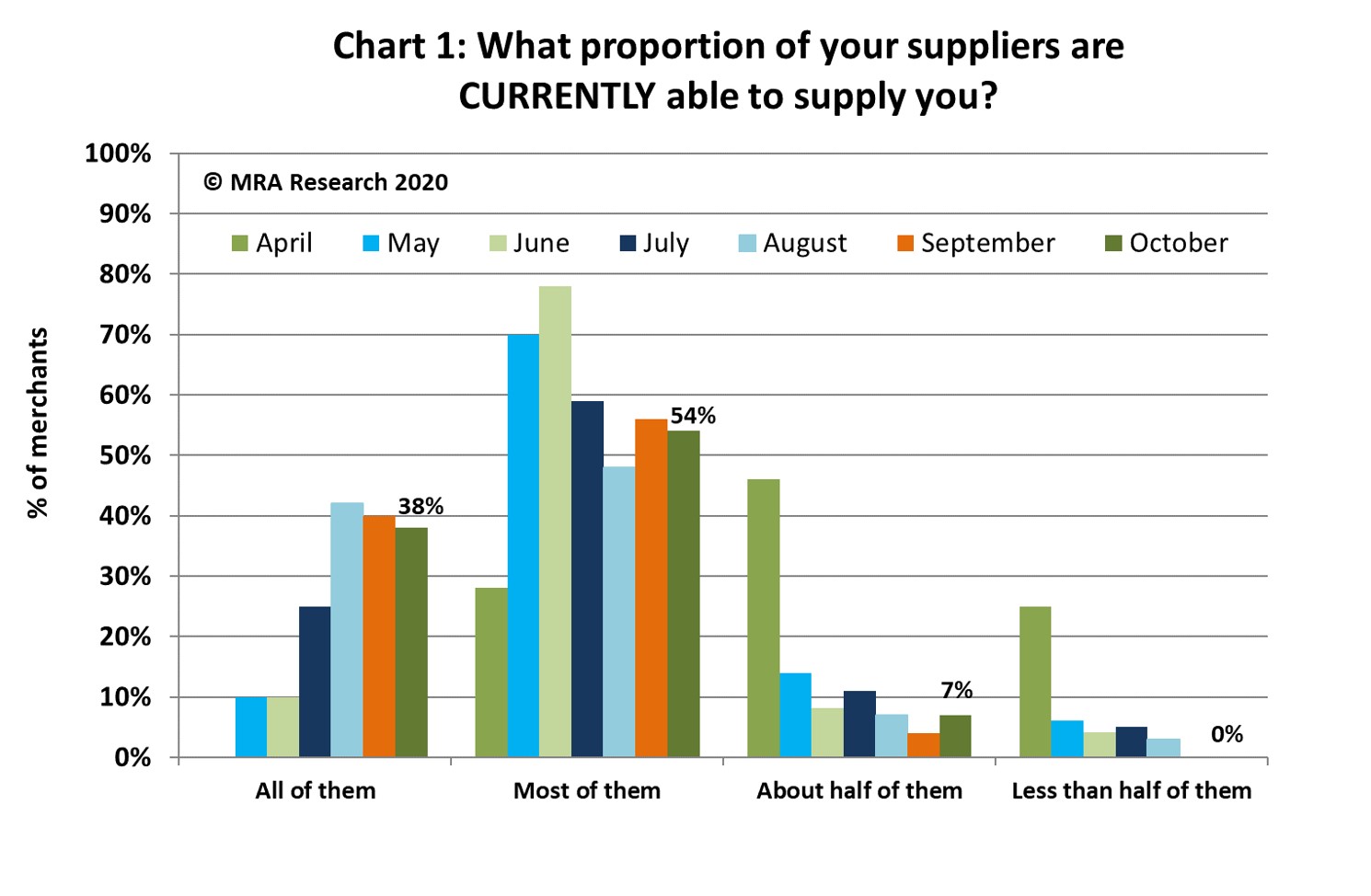 A net +9% of merchants expected sales to increase in October compared to September — see Chart 2. Small branches (net +22%), merchants in the South (+16%) and Nationals (+19%) were most bullish.

Year-on-year, merchants’ expectations continue to strengthen with a net +19% anticipating better sales over the period (also Chart 2). Significantly more merchants in the North (+41%) and Scotland (+47%) predicted higher sales, than those in the South (+8%). A net -4% of merchants in the Midlands expected sales to drop. 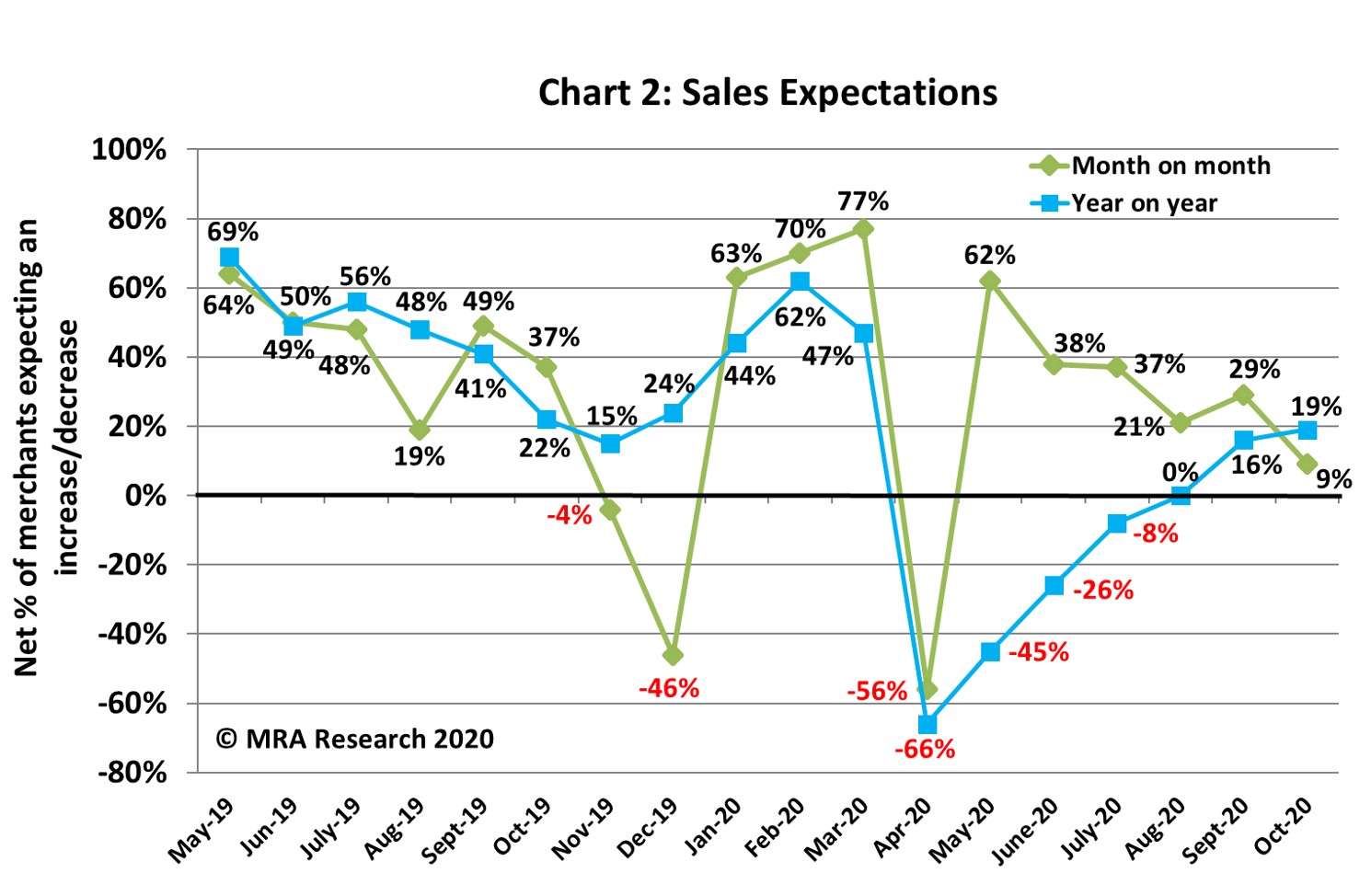 However, the outlook for the next quarter (October-December) weakens with Chart 3 showing a net -3% of merchants predicting lower sales compared to the previous quarter (July-September). While large merchants are upbeat with a net +22% forecasting growth, mid-sized branches expect sales to fall (-20%). 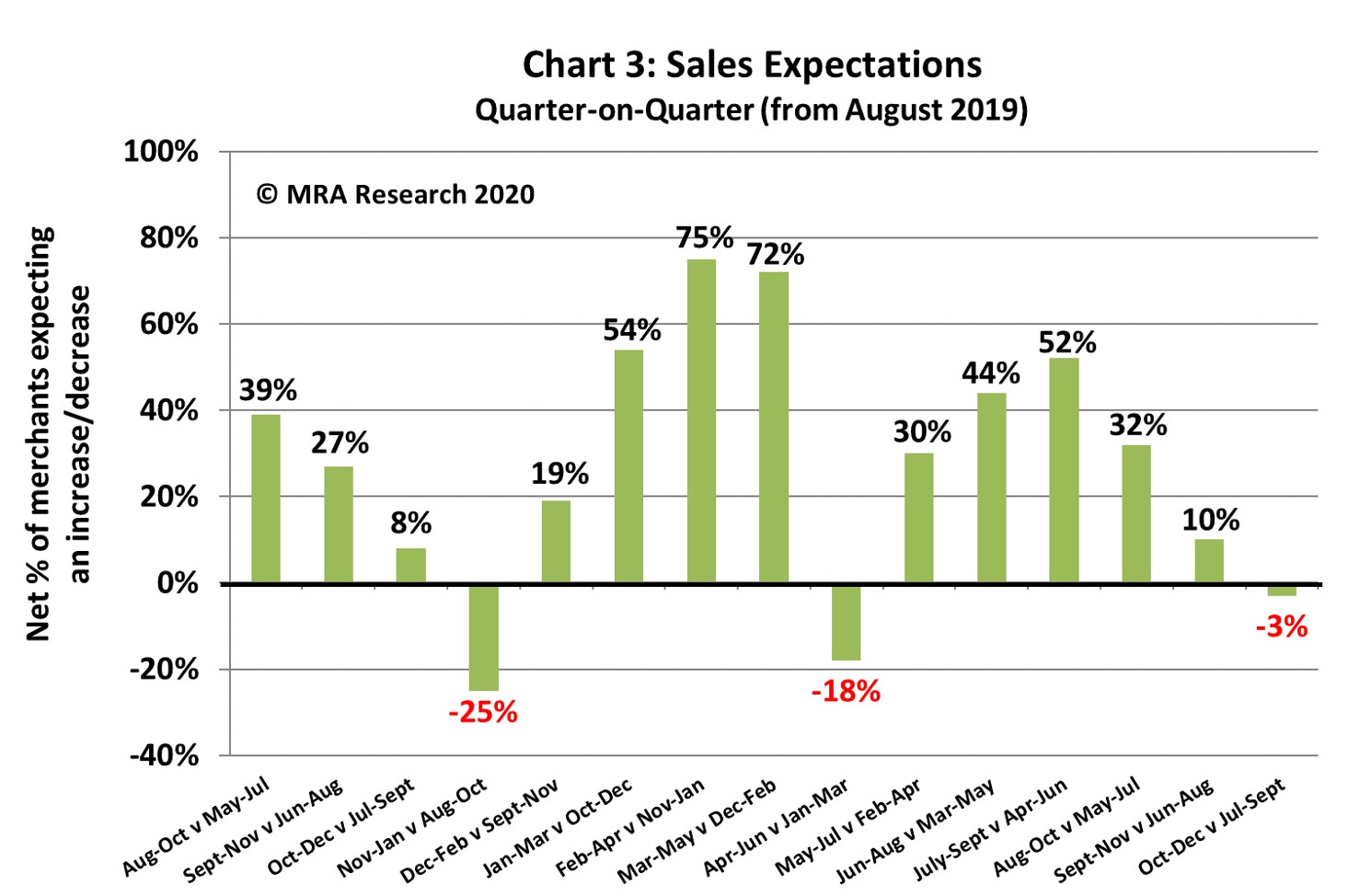 The outlook for the next six months, however, is strong. A net +16% of merchants forecast improved sales in October 2020 to March 2021 compared to April to September 2020. Expectations are similar across the board with large outlets (net +33%) and Nationals (+30%) most positive.

Of those anticipating better sales over the period, nearly three quarters forecast growth of up to 20% (Chart 4). 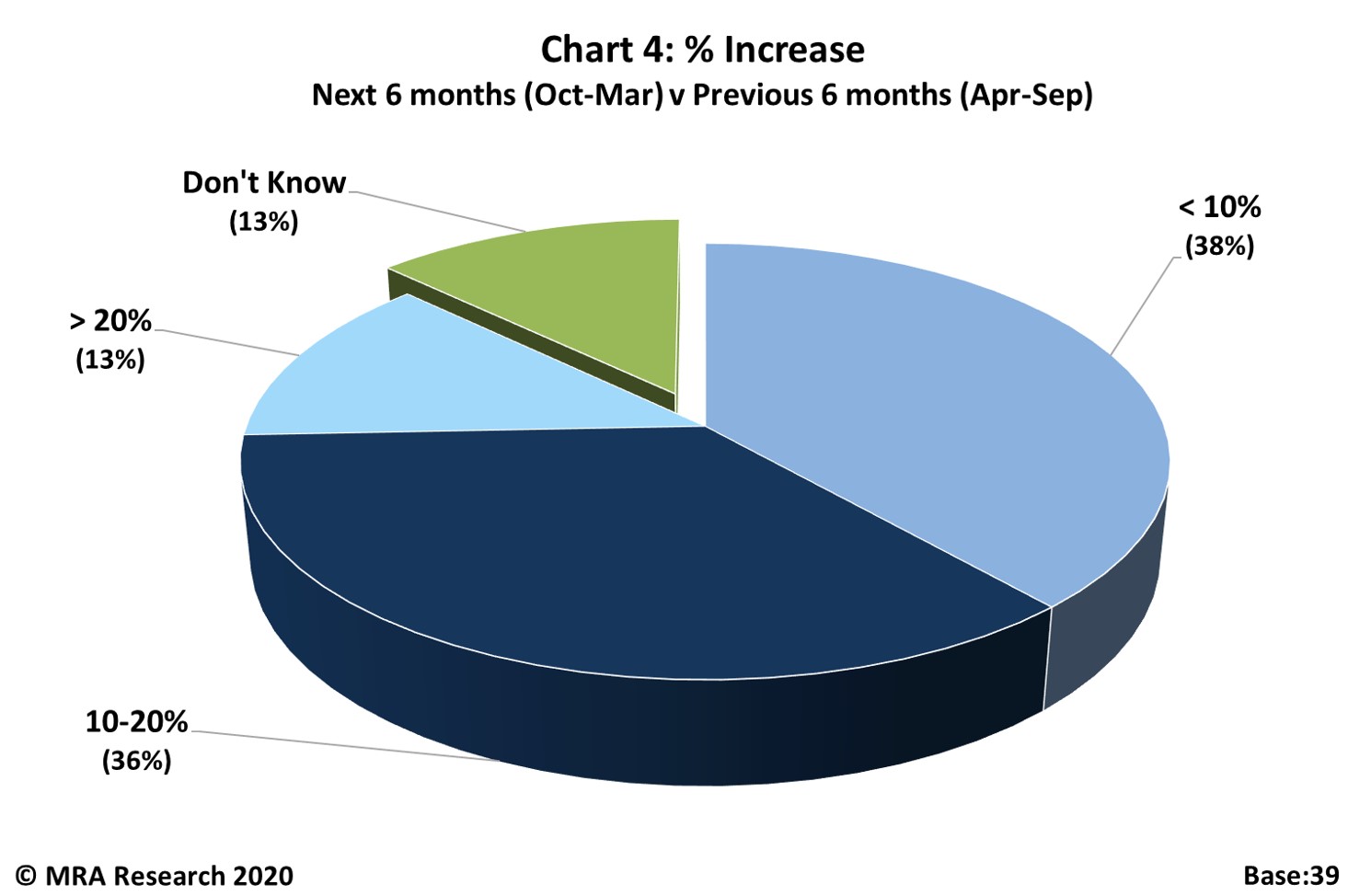 Month-on-month confidence in the market is ebbing, dropping to a balance of 0% in October from a net +21% in September’s survey. While small and large outlets (+15% and +22% respectively) are still bullish, mid-sized branches (-24%) are concerned about the market.

Year-on-year confidence in the market is affected too (net -49%) — see Chart 5. Merchants’ concerns over lockdown and a second wave, stocks and supplies were the main reasons, with Brexit starting to feature again too.

Although merchants’ confidence in their own business is down compared to the previous survey (net +34% in October compared to +48% in September), it remains strong. Merchants in the North are particularly buoyant (net +59%).

Year-on-year, merchants’ confidence in their own business continues to improve, with a net +4% more confident over the period (Chart 5). 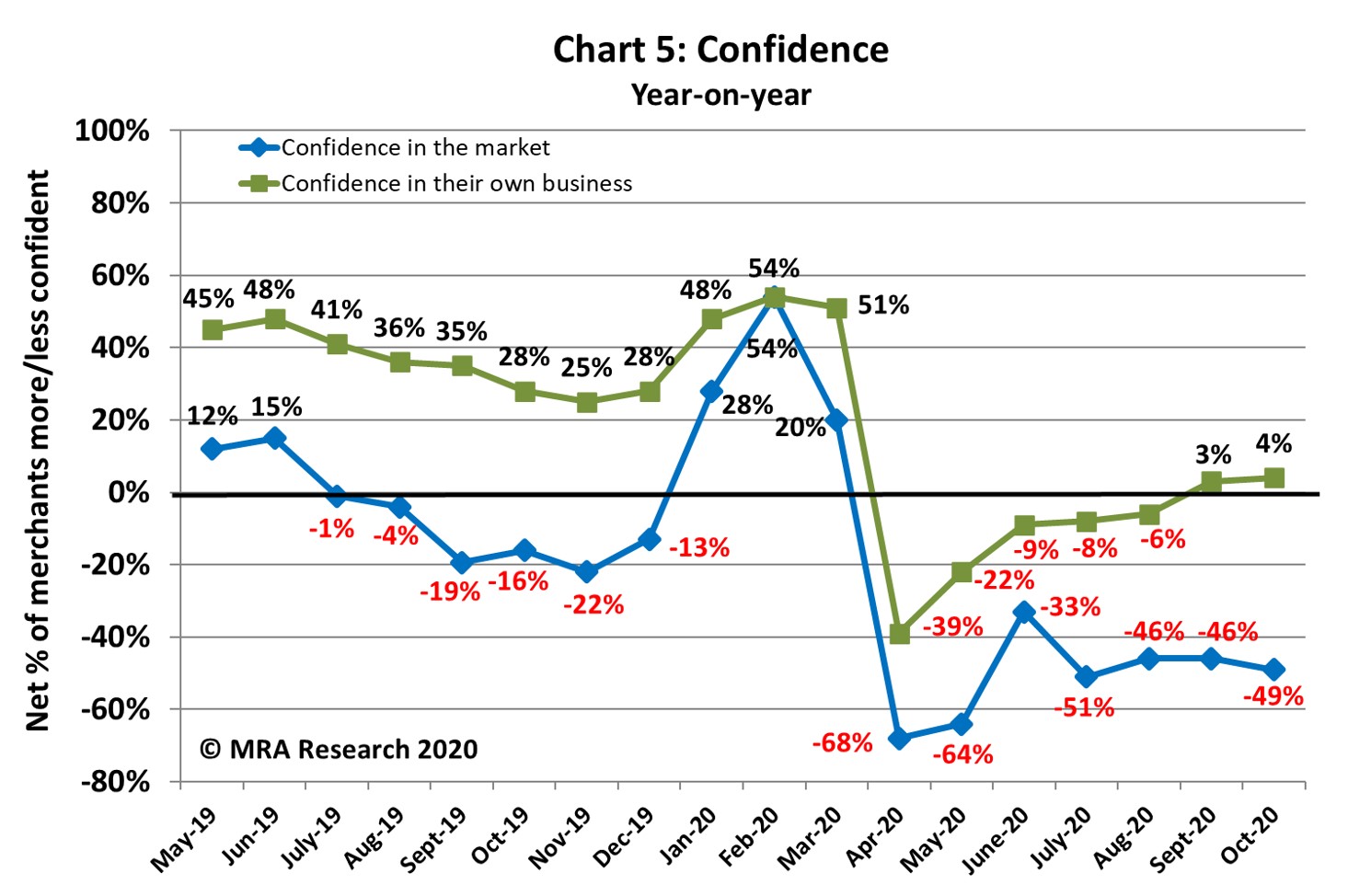 This report is the 18th in the series, with interviews conducted by MRA Research between 1st and 7th October 2020. Each month a representative sample of 100 merchants is interviewed. The sample is balanced by region, size and type of merchant, including nationals, regional multi-branch independents, and smaller independent merchants.

The full report can be downloaded from www.mra-research.co.uk/the-pulse or call Lucia Di Stazio at MRA Research on 01453 521621.

A version of this article originally appeared in PBM’s December edition. Please click here to read the full issue online.