As featured in the June edition of PBM, interviews for the latest instalment of The Pulse revealed that merchants’ sales expectations and confidence in April compared to March remained high, and they continued to rise sharply compared to April last year. Indeed, the underlying theme of the comments was “everything is getting back to some kind of normality”.

The Pulse, by MRA Research, is a monthly tracking survey of merchants’ confidence and prospects. Telephone interviewing took place between 6th and 8th April 2021 in the week before lockdown restrictions were lifted (in England).

Ninety-five percent of merchants in April said that most or all of their suppliers were able to supply them. While this is a significant improvement on April last year (28%), stock shortages, importing issues and long lead times are continuing problems.

April’s sales expectations eased compared to March but remained strong (net +53%) — see Chart 1. Expectations were strongest among large merchant branches (+89%) and were consistent regionally too, except for the South where they were lower (+39%).

Of the merchants anticipating sales growth in April, 53% expected an increase of 10-20% compared to March. A further 14% of merchants expected sales to grow over 20%.

Year-on-year, merchants’ sales expectations were up markedly from March’s survey (net +83%), reaching the highest level since the survey began — also Chart 1. More National and Regional merchants (+90% and +89% respectively) expected higher sales than Independent outlets (+56%). Two thirds of those expecting to sell more over the period anticipated growth of more than 20%. 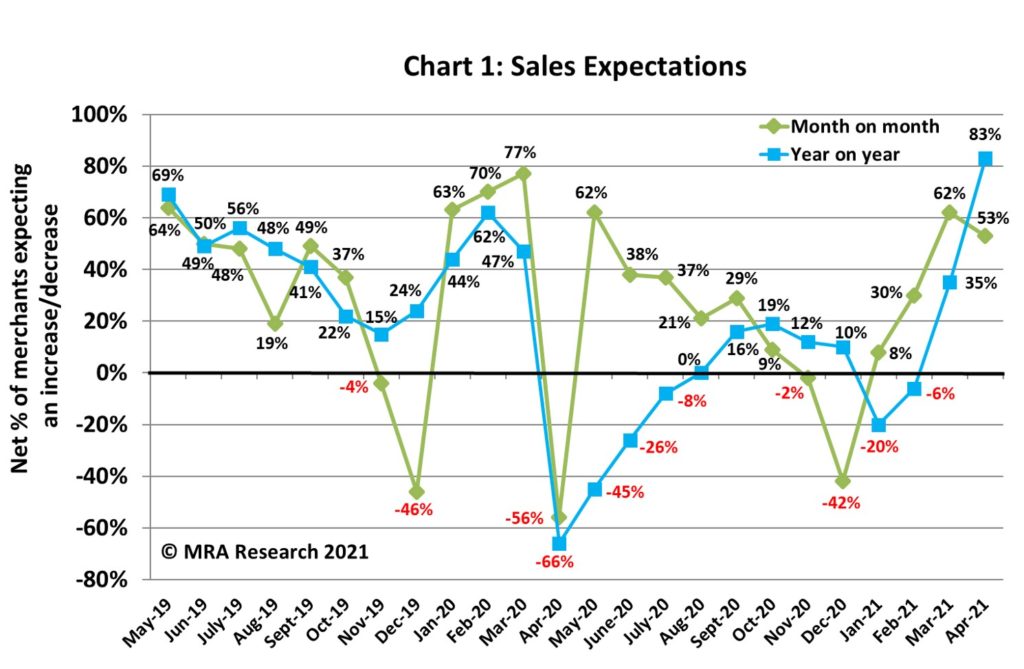 Sales expectations for the next three months (April to June) dipped slightly but remain high (net +62%). More large merchants (+83%) expect higher sales than small outlets (+48%). Merchants in Scotland (+75%) are more positive than those in other regions. Three quarters of merchants expecting improved sales, anticipate growth of 10% or more — see Chart 2. 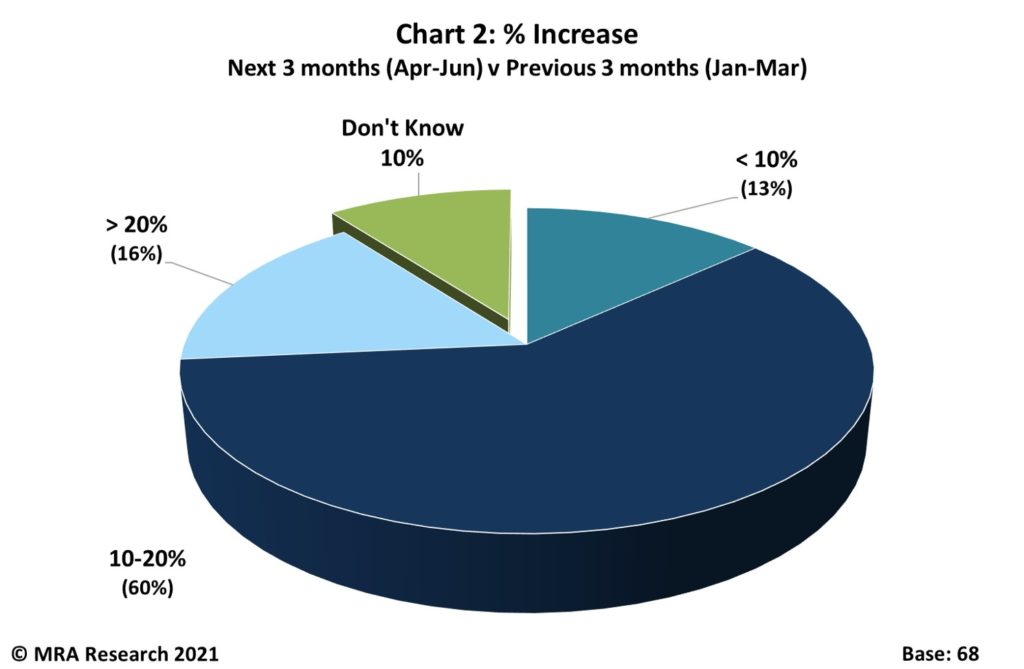 Merchants’ sales expectations for the next six months have eased slightly since March’s survey but are still strong (net +60%) — see Chart 3. Large branches (+78%) are most positive. Small outlets, those in Scotland and Independent merchants are slightly less so (all +50%). 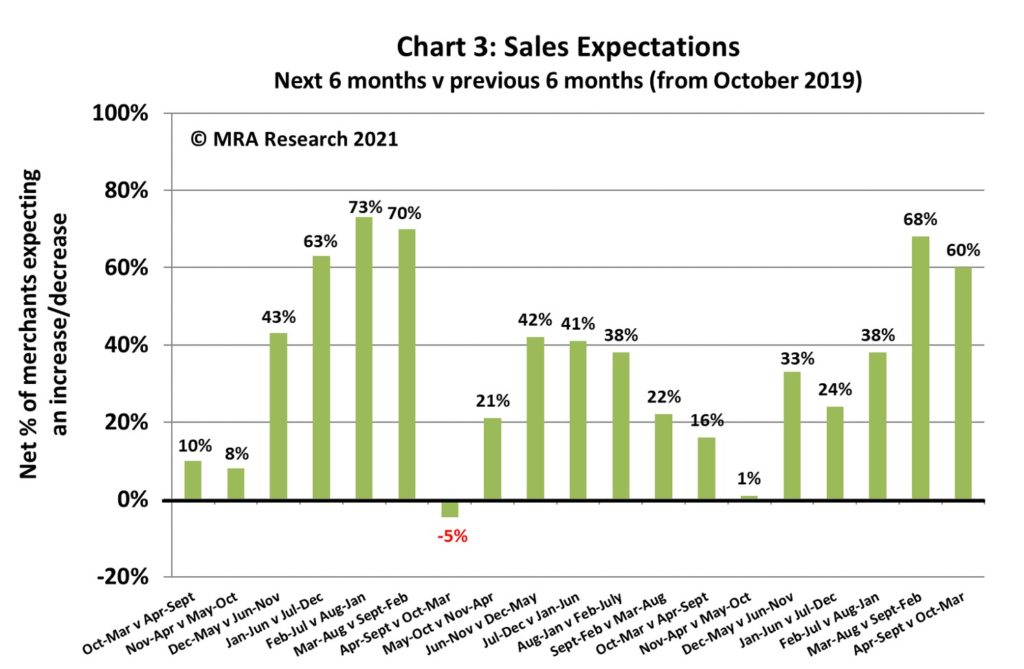 More than four in ten of those predicting an increase in sales over the next six months expect sales to be 10-20% higher. A quarter of merchants interviewed forecast growth of over 20% (Chart 4). 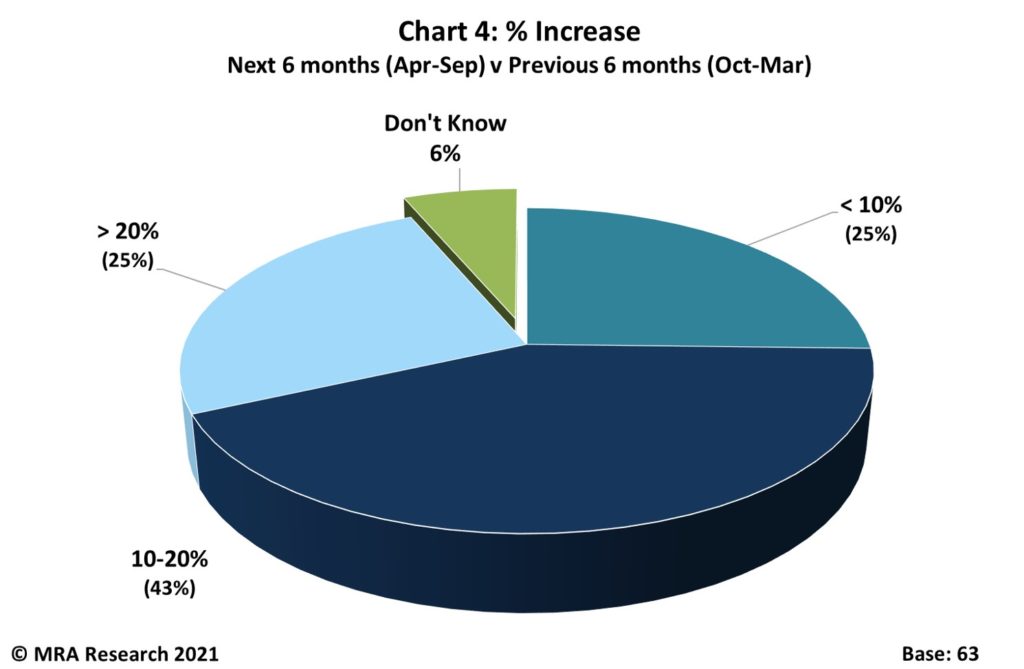 Confidence in the market softened slightly in April compared to March (net +33%). Large outlets and Nationals (+45%) were most confident. Those in Scotland (+19%) were more cautious.

Merchants’ confidence in the prospects for their own business remained strong in April compared to March (net +59%). Those in the South and Scotland (+69%) were more confident than merchants in the North (+36%).

Merchants’ confidence in their own business in April compared to the same month last year rose above March’s record level (net +85%) — Chart 5. Small branches (+93%) and Nationals (+92%) were most confident. 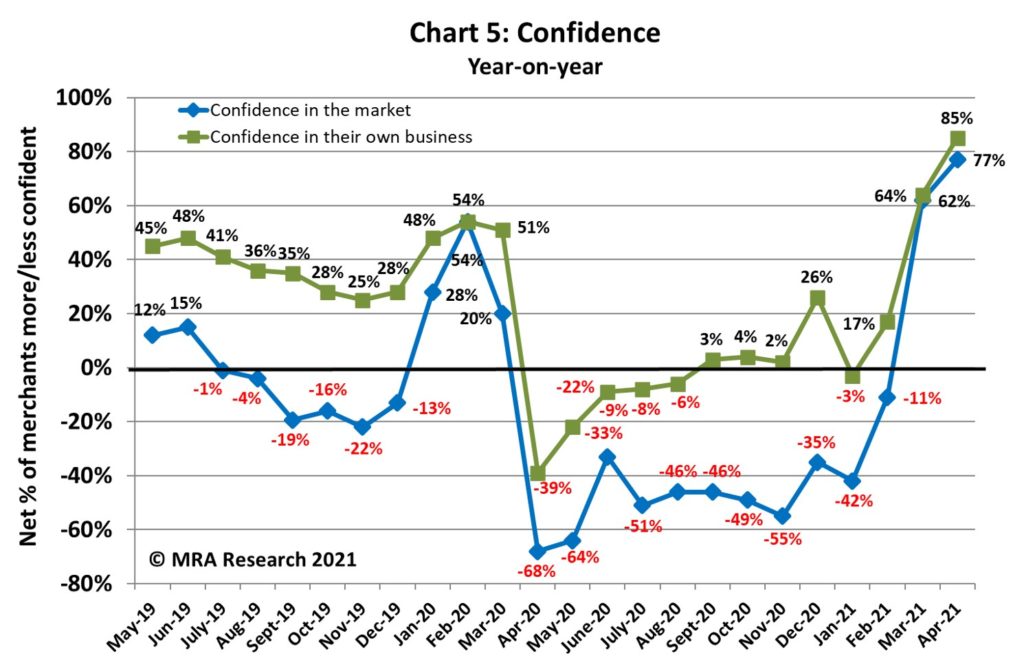 This report is the 24th in the series, with interviews conducted by MRA Research between 6th and 8th April 2021. Each month a representative sample of 100 merchants is interviewed. The sample is balanced by region, size and type of merchant, including nationals, regional multi-branch independents, and smaller independent merchants.

The full report can be downloaded for free from www.mra-research.co.uk/the-pulse and www.professionalbuildersmerchant.co.uk, or call Ralph Sutcliffe at MRA Research on 01453 521621.

This article can be found in the June 2021 issue of PBM.