As featured in PBM’s July/August issue and reflecting a number of news reports in the national press and on the BBC, the latest instalment of The Pulse revealed that supply issues are becoming a growing issue for the merchant sector.

Confidence in the market and sales expectations in May compared to April remained strong. However, merchants’ concerns have shifted from Brexit, Covid and Lockdowns to supply shortages, which are worsening.

The Pulse, by MRA Research, is a monthly tracking survey of merchants’ confidence and prospects. Telephone interviewing took place between 5th and 10th May 2021.

Eight out of ten merchants say ‘All’ or ‘Most’ of their suppliers are currently able to supply them. However, the number of merchants saying ‘All’ reduced notably in May. As one merchant confirmed: “We can get supplies, but it’s the lack of quantity that is the problem.”

Merchants were then asked on a scale of 1=Not At All to 7=Very Badly, to what extent has their business and customers been affected by supply problems. The average score has increased from 3.89 in March to 4.43 in May. With demand outstripping supply, merchants are starting to feel the affects — Chart 1. 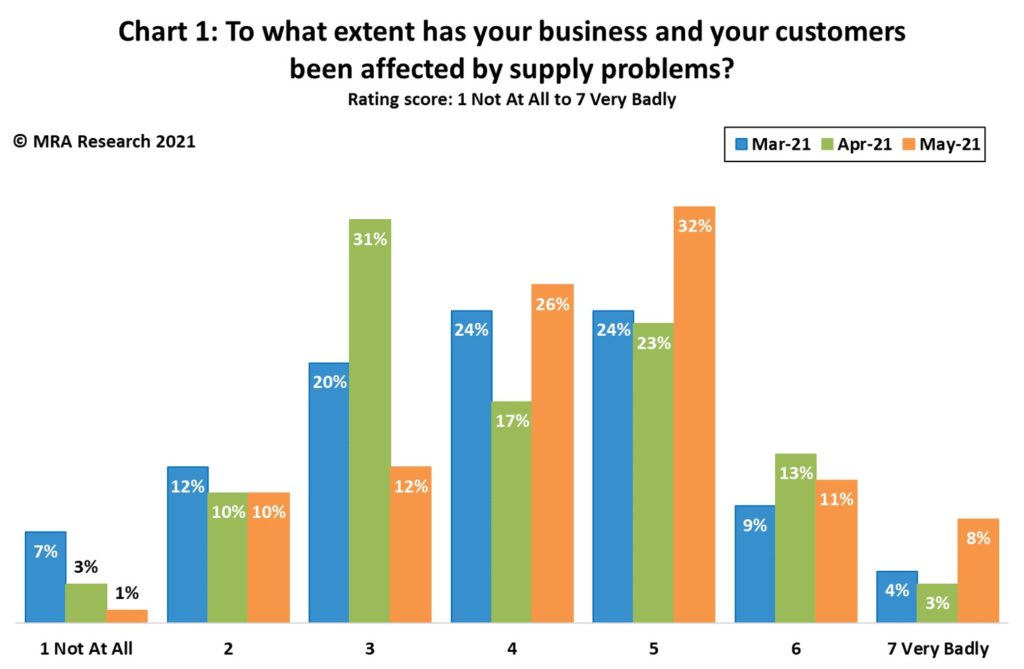 Sales expectations eased in May, with a net +38% of merchants forecasting improved sales compared to the previous month — Chart 2. Merchants in Scotland (net +56%) and in the North (+52%) have the strongest expectations.

Of those predicting improved sales in May, 80% of merchants forecasted an increase of up to 20% compared to April. 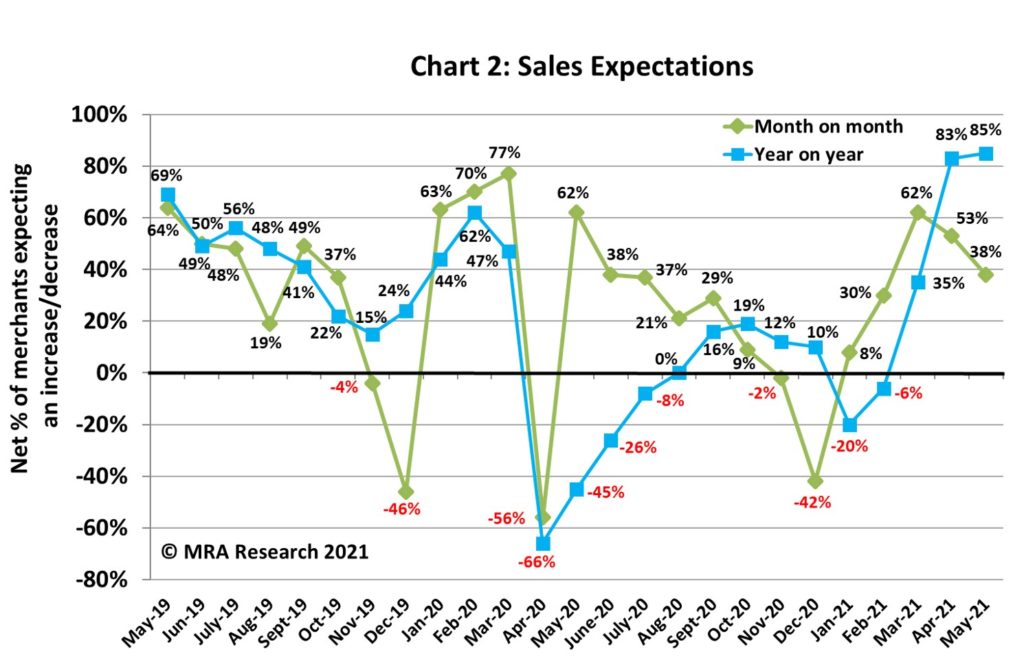 Year-on-year, sales expectations edged up to the highest since the survey began, with a net +85% of merchants anticipating better sales — also Chart 2. More Regional and National merchants (+89% and +86% respectively), forecasted an increase in sales than Independent outlets (+69%).

Seven out of ten merchants expecting to sell more, predicted growth of over 20% — Chart 3. 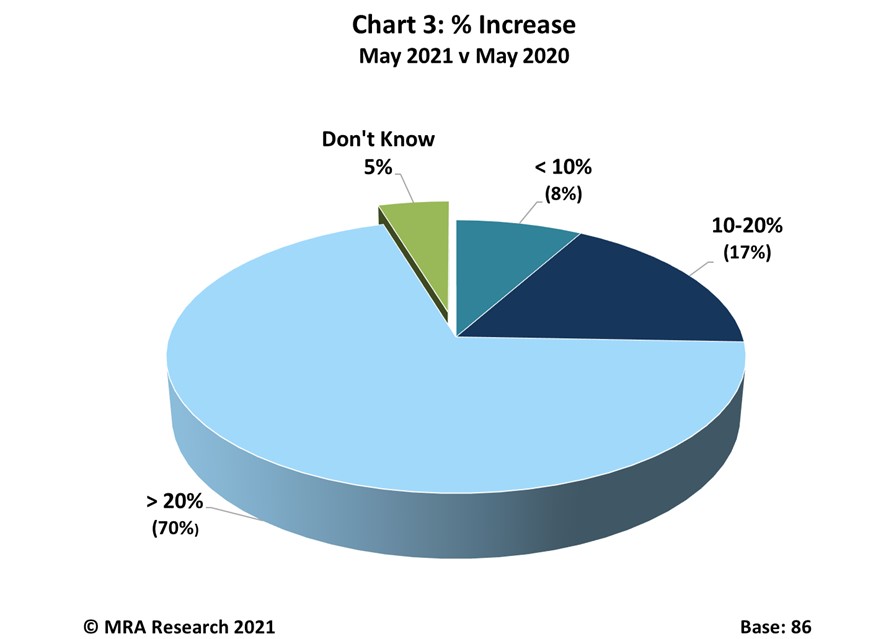 Sales expectations for the next three months (May to July) are moderating but remain strong, with a net +48% of merchants forecasting improved sales. More Independent merchants (+63%) expect higher sales than Regionals (+40%). Small outlets (net +61%) are notably more positive than mid-sized branches (+38%).

Sales expectations for the next six months (May to October) are also easing, with a net +47% of merchants anticipating growth. This compared to +60% in the previous survey — Chart 4. Those in Scotland (+63%) are markedly more positive than those in the Midlands (+28%).

Almost a quarter of those forecasting improved sales in the next six months predict growth of over 20%. Seven in ten merchants expect growth of up to 20%. 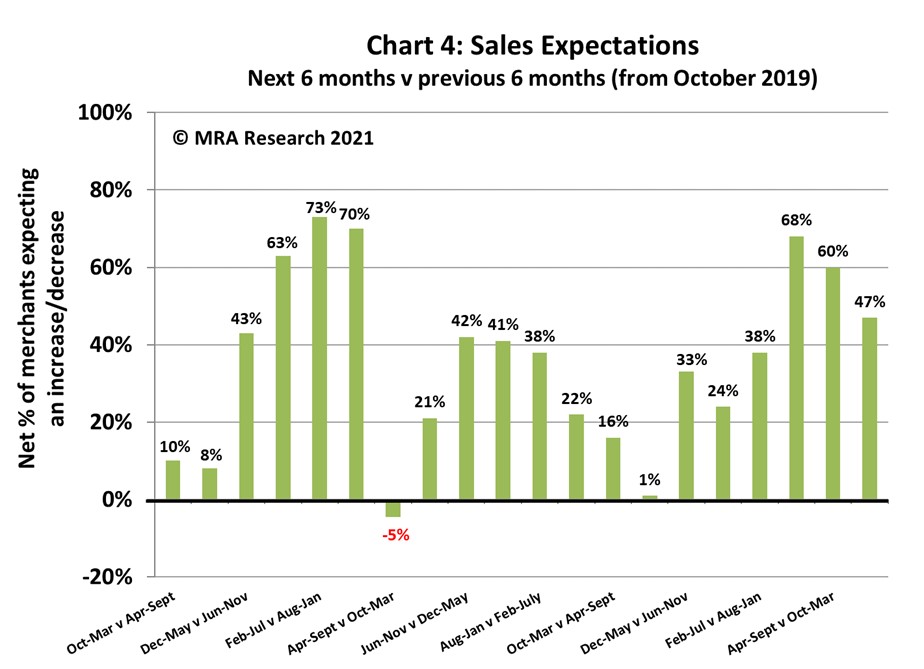 A net +28% of merchants were more confident in May than in April, although confidence has eased slightly from the previous month’s survey. Those in Scotland (+44%), Nationals (+41%) and small outlets (+39%) were most confident.

However, merchants’ confidence in the market for May compared to the same month last year remained extremely high (net +72%) — Chart 5. Nationals (+95%) were much more bullish than Regional outlets (+57%).

Merchants’ confidence in the prospects for their own business moderated slightly but remained strong in May compared to April (net +53%). Merchants in the Midlands and in Scotland (+44%) were more cautious than those in the South (+61%) and North (+57%).

For the third month in a row, merchants’ year-on-year confidence in their own business rose to the highest level recorded, with a net +86% more confident — also Chart 5. 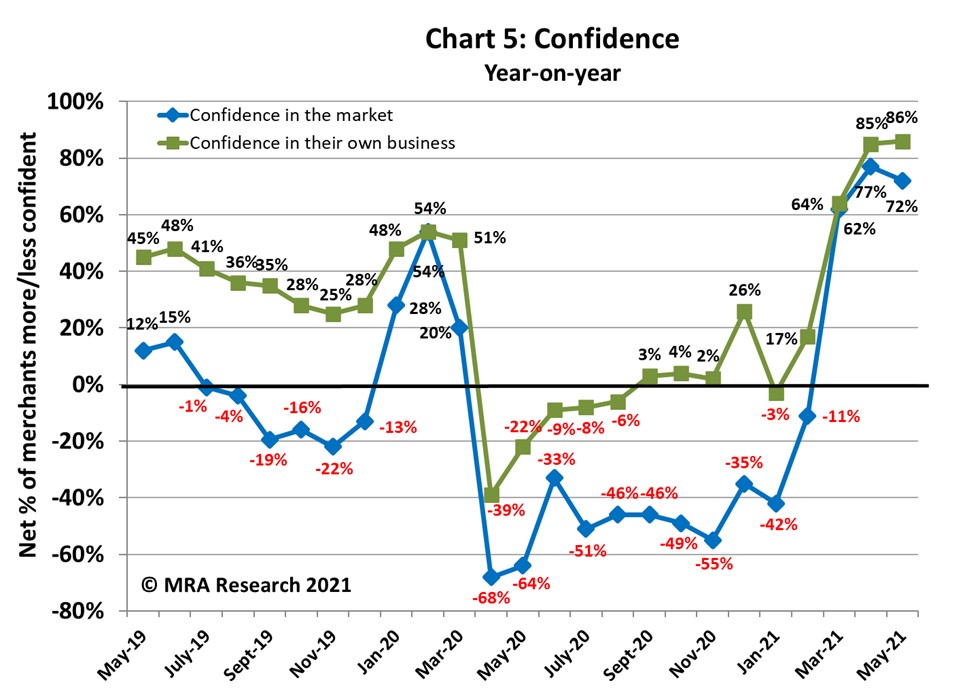 This report is the 25th in the series, with interviews conducted by MRA Research between 5th and 10th May 2021. Each month a representative sample of 100 merchants is interviewed. The sample is balanced by region, size and type of merchant, including nationals, regional multi-branch independents, and smaller independent merchants.

This article can be found in the July/ August 2021 issue of PBM.