With a new majority Government in the driving seat, and a shorter trading month in December, it’s not surprising January’s Pulse displays a robust rebound in expectations and confidence.

The survey featured in this edition was completed at the very start of January where a positive mood was still influenced by the outcome of December’s election. However, there have been mixed reports of January’s sales — some businesses are reporting a positive end to the month after a slow start, while others have yet to feel the effects of a more confident mood across the country.

A net +63% of merchants expected stronger sales in January compared to December, highlighting a significant uplift from the previous month’s survey — see Chart 1. This is not surprising, given the fewer trading days in December and more people ending early for Christmas. But expectations were also influenced by the surprisingly clear election outcome and an uplift in the national mood.

Expectations for January were strong across merchants of all sizes, type and region. 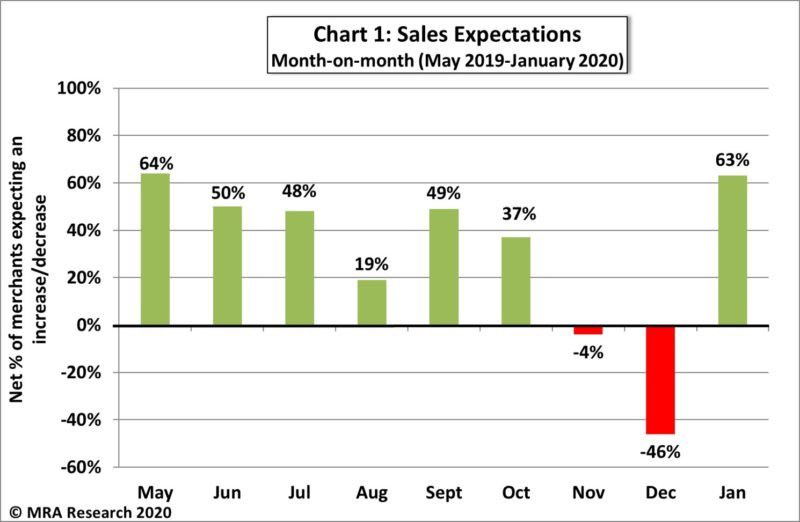 Year-on-Year, most merchants were positive with a net +44% anticipating better sales in January 2020 compared to January 2019. Expectations improved by 20 percentage points on the December survey. See Chart 2. Small branches (net +51%), regional merchants (+52%) and merchants in Scotland (+53%) were most positive. 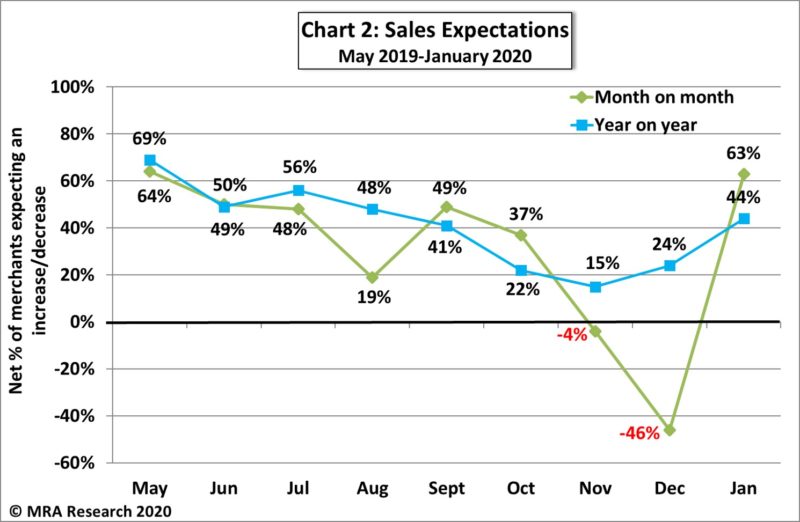 Looking ahead to the first quarter (January to March 2020), a net +54% of merchants forecast better sales compared with the previous three months (October to December 2019) — see Chart 3. Regionally, there was a north/south divide, with more merchants in the South and Midlands (net +60% and +64% respectively) expecting improved sales than those in the North and Scotland (+44% and +40% respectively).

The difference between the percentage of merchants expecting growth and those expecting a decrease is the net figure, expressed as a percentage. A positive net percentage indicates growth, a negative indicates decline, while net zero implies no change.

Regional merchants (net +68%) are more positive for the quarter ahead than the nationals (+46%) and independents (+23%).

Expectations for the next six months are also robust, with a net +63% of merchants anticipating better sales in January to June 2020 compared to July to December 2019. Merchants in large outlets (net +77%) were most positive for the period. 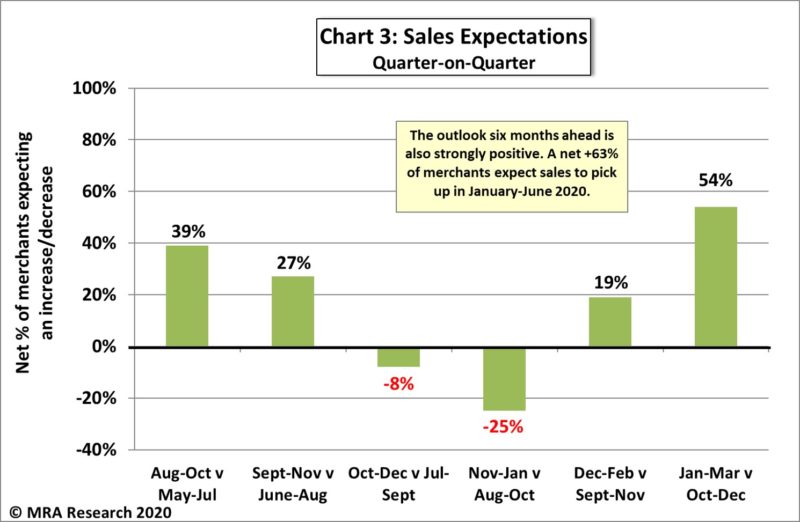 Year-on-year, market confidence bounced back above the line for the first time in six months, with a net +28% of merchants more confident in January compared to January last year — see Chart 4. Merchants in the South (+40%), regional merchants (+40%) and independents (+54%) were particularly confident. However, national merchants are more cautious (+2.7%).

The main reasons given for improved confidence over the period were not surprisingly centred around the result of the general election and the belief that Brexit will now ‘get sorted’. 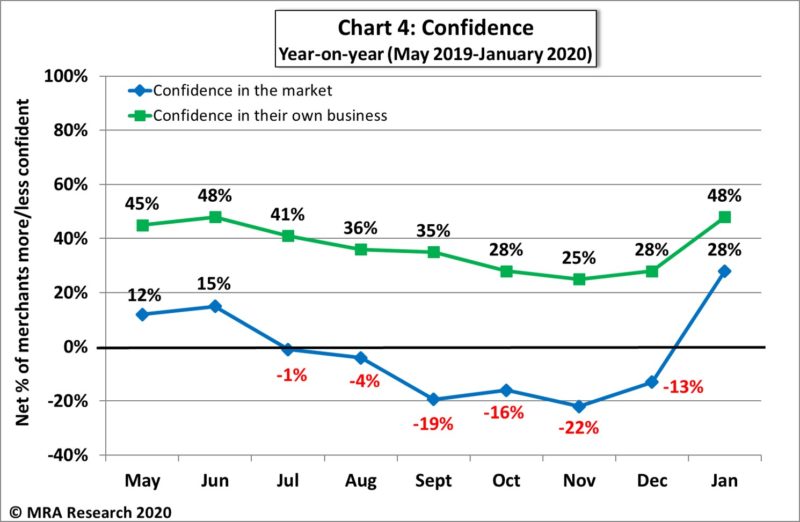 This report is based on the 9th survey in the series, with interviews conducted by MRA Research between 2 and 6 January 2020. Each month a representative sample of 100 merchants is interviewed, balanced by region, size and type of merchant, including nationals, regional multi-branch independents, and smaller independent merchants.

The full report can be downloaded free from www.mra-research.co.uk/the-pulse  or call Lucia Di Stazio at MRA Research on 01453 521621.