Toolbank’s Real Deals for You has returned for another year, and the firm promises that this year’s Christmas 2019 promotion will be “bigger and better than ever before.” Kelly Newstead reports.

Many of you may be familiar with the tools, accessories and consumables distributor Toolbank. Founded in 1972, it offers over 30,000 products from 250 national and international brands, supplying their product ranges through an extensive network of trade and industrial merchants, buying groups, online retailers, garden centres as well as specialist and general DIY and hardware stores.

Very much a brand and identity in its own right, Toolbank’s Real Deals for You campaign was born in 1986 and allows the distributors 14,000+ stockists to take advantage of a promotion that promises to deliver products at the best possible value, reinforced by in-store point of sale packs, brochures, end-user advertising and social media, in addition to a dedicated website.

Badged up as a Christmas promotion, the campaign has proven popular with stockists as a great way to take advantage of this busy seasonal period, and create a buzz and opportunity in store that customers can really get behind.

Starting in September the theme for this years’ promotion is ‘Where the Magic is Made’ and promises to have many tricks up its sleeve in terms of deals, POS support and a whole host of digital assets. The theme has been chosen because of its diversity and allows the advertising and marketing support to be connected through one common area while still allowing it to spin off into multiple directions… and of course allows for a bit of fun!

The promotion will include many well-known brands such as Stanley, Faithful, Hultafors, Bahco, Wera, Milwaukee and Dewalt. Relying on customer and supplier feedback to ensure constant evolution, offers are constantly refreshed for the duration of the promotional period to deliver stockists with the most valued products to maximise their own sales.

Marketing Manager, Nikki White, explained: “This year the ‘Magic’ of Real Deals for You Christmas promotion features 89 best-in-class products — with new and exclusive lines, a selection of popular favourites and some real industry winners!

“Tailored to meet the needs of the professional, Real Deals for You offers fantastic tools and accessories at great prices for every task and trade. It’s the only campaign in the industry to offer such a vast selection of products from leading manufacturers.” 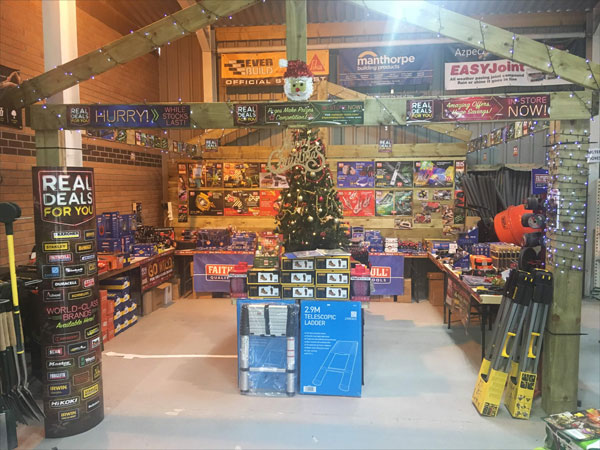 To help its thousands of stockists promote Real Deals for You in store, a range of marketing support tools will be on offer to help spread the message and provide useful information on what is involved in the promotion.

For example, the Point of Sale Pack is completely free to all participating stockists and includes a wide range of supporting material. This includes 500 x 20 A4 promotional leaflets which detail the product ranges included in the offer. At an extra cost, stockists can also choose to personalise their leaflets, which Real Deals for You states adds a significant benefit.

Retail and trade price ticket sheets are also included, which can be distributed around stockists to ensure prices are clearly labelled, as well as highlighting which particular products are involved in the promotion. Large free-standing displays, weatherproof PVC banners, cut case stickers, shelf strips, till wobblers and A2 counter mats are also being made available.

Nikki continued: “You won’t be able to miss us in-store — every Real Deals for You Approved Stockist receives a free marketing pack to create impactful displays and a presence in-store, online and in print, helping customers find what you’re looking for.”

For an extra price, stockists will also be able to take advantage of personalised TV adverts. There is a mix of 12 TV adverts available which can be tailored for a company’s own use and can include a company logo and website, for example. These bespoke ads can then be uploaded onto YouTube as well as other digital advertising platforms. This is again to help get the message of the promotion across to customers and further drive sales in store.

Real Deals for You will also be running its own social media campaigns on the promotion to generate further custom. This will include a combination of text and image posts along with a range of Facebook carousel posts.

In addition, the campaign period will also feature both end-user and stockist-focused competitions to encourage participation as well as inspire its merchant partners to go the extra mile in terms of their displays.

The familiar annual display competition will return once again, but this year will see three separate competitions for stockists — these will be ‘Best Window Display’, ‘Best In-store Display’ and ‘Best Initiative for Marketing Real Deals for You’, the latter being the new element for 2019. Prizes available will range from an Apple iPad for first place, Nespresso CitiZ & Milk for second place and a Google Home Mini for third place.

Competitions for customers will also be running, including the chance for them to scoop tickets to Alton Towers by simply buying anything involved in this year’s promotion.

0 0 0 0
Previous : National P&D Show returns to the Ricoh
Next : Bosch ‘innovation day’ round up