PBM reports back from this year’s recent BMF Conference, which had an over-arching theme of ‘Building Excellence’, and was attended by almost 450 delegates.

The sell-out 2019 BMF All Industry saw delegates arrive at the sumptuous Sun Gardens resort, a short distance from the UNESCO World Heritage Site of Dubrovnik, all ready for a packed programme of industry-focused business sessions, top level speakers and plentiful networking opportunities.

Recent industry conferences — held in annual rotation between the BMF and NMBS — have continued to raise the bar in terms of both venue and content. And from the themed ‘White Party’ on the opening evening through to the entertainment provided by M People singer Heather Small — appearing courtesy of one of the BMF’s charity partners, Variety — at the Gala Dinner, this year’s event appears to have exceeded expectations once again, judging by the feedback already received from the delegates.

A cohesive and tightly-woven business programme served up the perfect number of speakers to inform and provoke discussion, striking the perfect balance between merchant sector-specific content and thought-provoking presentations which allowed delegates to glean valuable insight from outside of the industry. Whilst the event was scheduled to be the first Conference to take part in a post-Brexit landscape, even though the subject of the UK’s departure from the European Union peppered most of the presentations and business sessions, another actually became the dominant refrain…

As the returning host from the BMF Conference in Budapest, Gethin Jones proved once more to be an engaging and energetic compere — capturing the essence of an industry that places people and relationships at its heart. Indeed, ‘people’ quickly emerged as the central underlying theme of the event’s agenda with many speakers referencing the need to attract and develop the talent of a new generation whilst also nurturing the experience and expertise of long-serving, committed staff.

The first sessions on Day One explicitly built on this in a segment entitled ‘Building Your People’. Beginning with a discussion between CEO John Newcomb and Chairman Peter Hindle MBE on the recent developments at the BMF, both cited the need to recruit more young people into the industry.

Here, John referenced the launch of the new ‘Building Materials Careers’ website, while Peter — who retires from his role next March — outlined his hopes for an industry-wide apprenticeship programme that could encompass the full spectrum of the sector — from supplier, merchant and the trade itself — and ultimately allow the individuals to find their own career path.

The theme continued throughout, not least in Neil Lawrence’s presentation on the second day in which the now Chief Operating Officer of Jewson and Managing Director of Saint-Gobain’s Local Merchant Group shared his experiences of developing Gibbs & Dandy within the larger group framework. 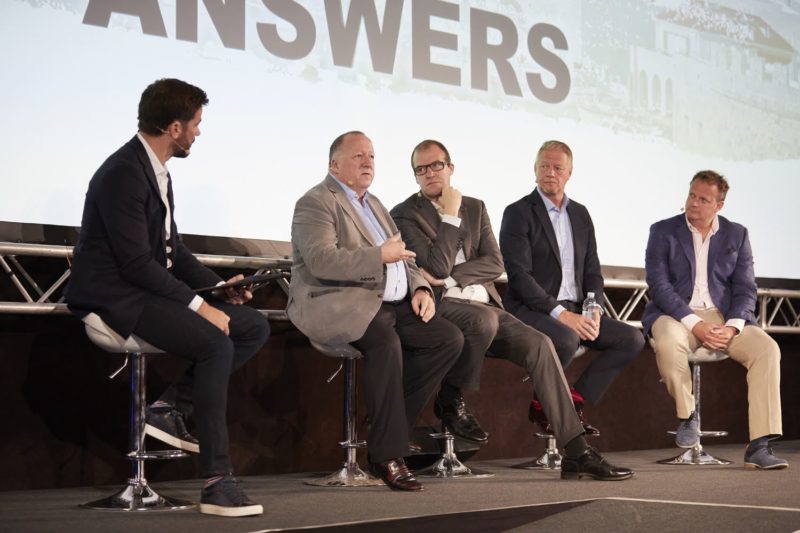 Ahead of an excellent panel session — which also drew on the experiences of Bradfords CEO David Young, Ibstock Sales Director Tony France, and Mark Vandecruys from Belgian roofing products distributor Fedrus International — Neil explained how a key conclusion was to carefully consider staffing and recruitment — making sure that the right people were put in the right places, whilst moving on “the bad apples who can spoil the entire barrel”.

‘People’ again formed the basis of a stellar turn from sports psychologist, Michael Caulfield. Michael has worked with a host of top names in professional sport — including England manager Gareth Southgate — and with an excellent delivery that seamlessly blended humour with authority, he outlined how the notion of leadership is changing. The ‘human touch’ and the need to listen and communicate (rather than dictate…) more effectively are now more crucial than ever in interpersonal relationships and management style, he argued. And by listening more, many problems can be spotted early

Michael’s presentation deftly considered many aspects of mental well-being and this formed a key tenet of Nick Knowles’ heartfelt presentation in which the host of DIY SOS: The Big Build reflected on the unheralded support given by the industry in supplying the materials and expertise for the show’s projects. Part of Nick’s discussion considered how the pressures of the job mean that trade professionals are especially vulnerable to mental health difficulties, noting that the focus of the programme — away from their own stress of chasing and fighting for the next contract — allows them to ‘fall in love once again with what they do’.

Nick was followed by what many delegates considered to be the event’s most powerful session. Jonny Benjamin MBE and Neil Laybourn took to the stage to share the incredible story of how the two complete strangers first met — with Jonny ready to end his life by jumping from Waterloo Bridge, and Neil able to make a connection and literally talk him back from the edge.

With remarkable honesty, Neil described his own struggles to convey a message that it is ‘okay to talk’ and that ‘everyone can be an ally’. A subsequent Q&A, further followed by a pair of seminar sessions later in the weekend, drew a considerable response from the delegates and encouragingly outlining how barriers to discussing mental health issues in their own organisations are being broken down, with support services increasingly being made available.

Indicative of the comments of many, Andrew Harrison, Chief Executive Officer of Travis Perkins’ P&H Division, said: “The topic of mental health was inspired and timely, and no doubt resonated with everyone.”

Paul Sexton, Managing Director of Lawsons, added: “The conference content was very relevant and delivered powerful messages of motivation, drive, strength, determination and shared best in class ideas. The highlight for me was the topic of mental health covered by both Nick Knowles and Neil & Jonny — throughout the conference, I heard many people sharing their own mental health experiences; for me dealing with this one issue justified the whole of the conference.”

The BMF raised a fantastic £25,000 for charity during the Gala Dinner that concluded its sell-out All Industry Conference in Dubrovnik. The money will be divided equally between Variety, the Children’s Charity — the BMF’s partner charity this year — and Mental Health UK, whose work was featured during the Conference sessions.

The amount raised at this year’s Conference brings the total amount raised for charity at BMF events during the last two years to just under a staggering £220,000.

John Newcomb, BMF CEO, said: “We are proud of the industry for achieving so much for two very deserving charities. I would like to thank everyone who contributed both to our fundraising and during the rest of the Conference. We have received some fantastic feedback already from delegates and this was a great conclusion to a phenomenally successful event.”

For more on the 2019 BMF Conference, visit www.bmf.org.uk and also check out #BMFConf19 on Twitter to see comments from the delegates.