Please note, this story discusses the subject of suicide prevention (a key theme of this year’s World Mental Health Day). Support is available by calling the 24/7 Construction Industry Helpline on 0345 605 1956.

The following conversation was relayed to the Lighthouse Club by one of the industry’s mental health first aiders when providing feedback on how their training had helped them with supporting their construction colleagues. The charity has preserved the anonymity of those concerned but felt that the story was so strong, it needed to be shared.

The organisation explains that it highlights “the huge difference that just one person can make by listening and supporting someone who felt that they had nowhere to turn and that their life was no longer worth living”. The person was signposted to its 24/7 Construction Industry Helpline and “so the slow journey to recovery started”.

PBM is pleased to be able to share the story, as told by the trainer:

The situation I was presented with was seeing a 30 year old construction ground worker at the health centre on site who attended saying that they felt ‘down’ and had ‘had enough’. He had just been made redundant and although this is common in the construction industry and he previously had agency work lined up, problems and changes at home coincided with the job loss.

He had split from his girlfriend, who was the mother of one of his children six weeks prior to losing his job. He had moved out of their shared home and as a result only had work lodgings whilst working away from home. He also had two children with a previous partner.

He was now about to become homeless and jobless with no family to support him. His mother died when he was young, his father left and his brother was distant towards him. He had a poor credit rating so could not rent and was feeling homesick.

He was talking about life not being worth living anymore and “how construction sites are dangerous at the best of times, let alone when you feel like this” which I took to be a reference to potential self-harm or at least a cry for help. He admitted to thoughts of suicide but said the thought of leaving his children stopped him from acting on these thoughts.

I had previously given him the phone number for the Construction Industry Helpline run by the Lighthouse Construction Industry Charity, a charity who specialise in supporting construction workers and their families through financial, family and mental health problems. When I arranged to meet with him the next day, he had not called the number and was now at a point where he could not move forward or make a decision.

He was trying to sort out too many things at once and he needed help prioritising his problems. Together, we wrote a priority action list, putting his housing needs and requirement for urgent GP input at the top. I then encouraged him to call the Construction Industry Helpline from my office as his ‘one major step for the day’ to achieve. He said he had nothing else to lose and called.

He was on the phone for 30 minutes and allowed me to listen to the conversation so I can appreciate how he felt that he was being listened. They clearly understood the difficult and often chaotic lives led by construction workers and none of his issues were new to them. When he came off the phone, he smiled and said,  “someone is actually helping”.

By the end of the call he had been referred for counselling, been given scheduled call back times so they could keep in touch to ensure his safety and arranged a phone appointment to discuss financial support.

The Lighthouse Construction Industry Charity picks up by noting that whilst this story had a positive ending, for many of our construction colleagues, circumstances just like this end in tragedy. The theme for World Mental Health Day is suicide prevention and with two construction workers taking their own life every single working day we need to take action now. Just one small step can make all the difference.

The organisiation asks all in the sector to “Join us in our mission to ensure that no worker feels alone in a crisis. Take the time to talk, ask if someone is ok and if you think they need extra help, we are here 24/7 every single day of the year.” 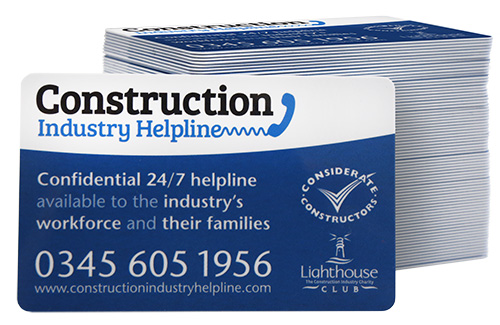 Merchants can get involved and support their trade customers by handing out cards detailing the Construction Industry Helpline and outlining the ways in which individuals can get the help they need. This story from last year offers an example with the work undertaken by Chandlers Building Supplies.

Whilst statistics demonstrate that trade professionals are particularly vulnerable to mental health issues, of course the merchant sector itself is not immune. Many business within the sector have implemented programmes to support their own staff (see below for examples) and the subject was discussed in great depth at this year’s BMF Conference in Dubrovnik. The BMF has also recently confirmed that its charity partners for 2020 will be the Samaritans and Mental Health UK.