Plumbing and heating merchants play a key role in advising installers on the right products for the job, especially in the area of controls where technology is changing so rapidly. Martin Wilson, Sales Director at Resideo, outlines the latest developments that merchants need to know.

The demand for smart technology in the home shows no sign of slowing, with recent surveys showing that 45% of UK adults say they intend to make their homes smarter in the near future. Many installers will turn to merchants for advice on this evolving world, so it’s important for them to get clued up so they can provide guidance to their customers.

Here are three technologies that are having an impact on what installers are fitting on a daily basis:

Many homeowners still use simple on/off timers in their home, which work by switching the boiler on and off at timed intervals or via manual intervention. However, modern programmable thermostats now feature load compensating technology, such as time proportional and integral (TPI), which makes them much more energy efficient.

TPI works by closely monitoring room temperature in comparison with the desired set point. When this is within a range of 1.5° Celsius, the software performs a series of calculations to determine how long the boiler needs to be fired to reach and maintain the set temperature. This means that the boiler is fired just long enough to achieve the set temperature and no longer, thus increasing energy efficiency.

In fact, research from BEAMA indicates that the addition of a TPI room thermostat with thermostatic radiator valves (TRVs) can cut costs by around 53% compared to a standard set of controls.

A good time for installers to have this conversation with their own customers is when they’re servicing the boiler — they can offer to have a look at the homeowner’s controls and decide whether they could benefit from more efficient models. When replacing the boiler entirely, there are more options available.

One example is OpenTherm, which is a method of communication between compatible boilers and thermostats. It allows the amount of heat provided by the boiler to be altered to match the varying demand signal, by reducing the flow temperature to a minimum level as it leaves the boiler. This modulation improves boiler efficiency by running at lower flow temperatures for longer periods of time.

If the installer is fitting an OpenTherm-enabled boiler anyway, installing a compatible thermostat will ensure the homeowner gets the most of the technology.

Part L1A of the Building Regulations stipulates that properties with a floor area of more than 150m2must have two or more heating zones, but zoning is becoming more popular even in smaller properties due to the high level of temperature control and energy efficiency benefits.

Multiple zones can be achieved by installing separate, motorised zone valves in what is known as S Plan +, but this is often costly and disruptive to the homeowner as it involves taking up floorboards and making pipework adjustments.

To make life easier for the installer, wireless controls that zone without motorised zone valves such as the evohome multi-zoning system are available. evohome provides up to 12 heating zones along with hot water control; utilising a mixture of radiator controllers, digital thermostats and underfloor heating controllers to achieve the desired zoning configuration. 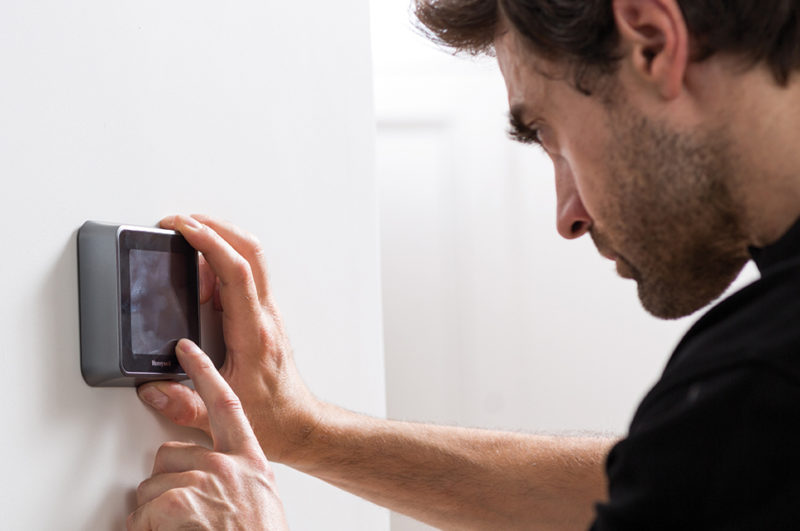 Rather than using a number of different apps, people are increasingly using a central ‘hub’, such as an Amazon Echo or Google Home to control their smart technology. These hubs have in-built, voice-activated assistants that listen for commands and act upon them accordingly.

For instance, a user can call upon their digital assistant to change their temperature, fix a date in their diary, or even add items to a shopping list with just a few simple requests. Resideo’s Honeywell Home T6, evohome and Y87RF work with the most popular smart hubs to allow homeowners to control their heating at their convenience. An example command for one of these devices could be: “If the current weather condition changes to snow, set temperature to 26°C”.

Resideo offers a Controls Applications training course which gives in-depth training on all of the aforementioned technologies. Whilst it is aimed at installers, it would also be useful for merchant staff who want to learn more about advanced controls technology. Alternatively, Resideo also provides bespoke training sessions that can be delivered in-branch for merchants who have specific needs or aren’t able to attend an offsite session.

For merchants who are short on time, online training via Youlearn is a useful alternative to face-to-face sessions. Users can log on and train whenever they like, with the freedom to select the topics that are relevant to them, which are all broken down into easily digestible chunks.

Whichever the preferred method, training makes it easier for merchants to answer any questions their customers may have regarding the ever-expanding smart market.

For more information on Resideo’s range of products and support services for merchants, go to https://heatingcontrols.honeywellhome.com.