Whilst a trade agreement with the EU was ultimately signed ahead of the end of the transition period before Christmas, supply chain disruption was already becoming a major concern as the broader logistics industry contended with a triple threat of seasonal demand pressures, Brexit and the ongoing impact of the coronavirus pandemic. PBM considers a number of perspectives on the potential for ongoing supply chain issues, including delays, shortages and price rises.

Border closures, traffic jams, lorry parks, customs declarations, rules of origin, container shortages, disruption at the ports and a lack of hauliers. It has not been a positive time for the vast majority of businesses in the country who depend on a smooth supply chain and seamless logistics.

With issues mounting and increasing accounts detailing the impact on construction supplies, the BMF announced shortly before Christmas that it had begun collating reports from members on product availability issues and would be advising Government on the impact this is having on the sector.

According to the BMF, the current issues mainly relate to goods imported from the Far East — including sanitaryware, power tools, screws and fixings — in addition to timber products imported from Scandinavia, where supplies of soft wood are under pressure due to increased demand worldwide.

BMF CEO, John Newcomb — who co-chairs the Construction Leadership Council’s working group on product availability and the movement of goods and materials following Brexit — was reported to be in regular dialogue with the Department of Business, Energy and Industrial Strategy (BEIS) to share intelligence with relevant parties across Government. BEIS has relayed these discussions to the key relevant Departments including the Department of Transport, which is monitoring the issue and increasing its engagement with the shipping industry.

Speaking in late December, John said: “Pretty much all the availability issues at the moment are Covid-related and the result of factories closing and re-opening, along with the shortage of container capacity, which also flows from Covid. At the moment we view Brexit as a complicating factor rather than the main area of concern, but we have also raised the issue of the preparedness of UK ports and customs post-Brexit with our contacts at BEIS.”

He added: “While shortages are not reported to be impacting sites yet, there are a lot of suppliers and merchants already flashing warning signs. It takes only one material to be unavailable to impact work on site.”

Mike Tattam, Lakes Sales & Marketing Director and BMBI Expert, drilled down into some of the detail for PBM and warned that “we’re all likely to be hit by shortages, delays and cost surcharges, however they’re described”.

Citing the recent images of “stationary trucks lining the M20 on the way to the port of Dover” and how “reports of congestion in Felixstowe and Southampton ports have spilled into the headlines and onto the main news channels”, Mike added: “It’s not a local British difficulty; it’s a global problem that’s getting rapidly worse.

“It’s been described as a perfect storm with a number of causes, including a shortage of containers because of unprecedented demand, ships mothballed with their containers and crew, and carriers reluctant to take bookings for the UK because of the congestion at UK ports. Container ships are waiting at sea or sailing to the next port and calling in on their way back.

“Some forwarders, anticipating post-Brexit chaos, are refusing to ship to the UK at all.” 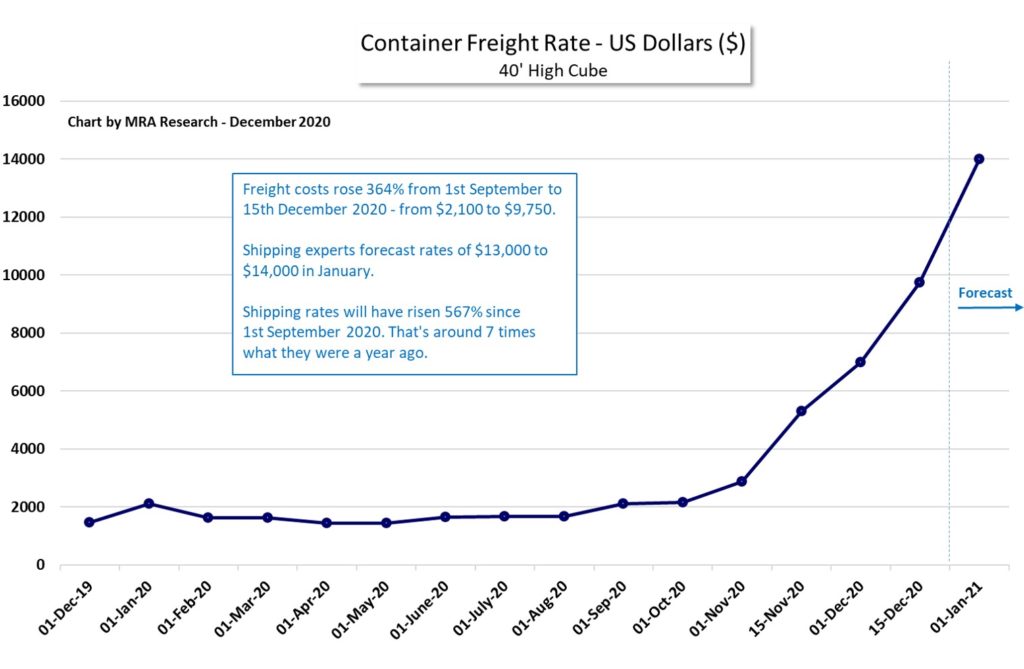 Indeed, Mike estimates there has been a 25% reduction in the volume of ships coming to the UK, with logistics further impacted by a shortage of hauliers once the goods have (finally) arrived and cleared customs. He continued: “Shipping costs are rising rapidly to eye-watering levels. In August, the container freight rate (for a 40’ High Cube) was $1,675. By 1st November this had risen 72% to $2,875 (see chart). As of December 1st it was $7,000 and in the period December 15th-31st rates have risen to $9,750. Shipping experts were forecasting $13,000-$14,000 a container in January.

“In the words of one shipper: ‘shipping costs have gone mad.’ Steeply rising costs are being reflected in surcharges, and if you haven’t already had them, you will be. Everyone is being hit. But better surcharges you can pass on to end customers than price rises. Surcharges are temporary and will be rescinded when the crisis is over; price increases are permanent.

Mike concluded: “I’d also emphasise that merchants should stay with their supply partners to ensure continuity of supply and not switch, hoping to avoid temporary surcharges.”

Returning briefly to the post-Brexit trade agreement with the EU, with the threat of tariffs and quotas avoided, the response from the construction sector appeared to be broadly positive. For example, James Butcher, Head of Policy at the National Federation of Builders and the Construction Leadership Council’s Brexit Working Group Chair, said: “The mutual co-operation in respect of reducing technical trade barriers and co-operation at the border will undoubtedly help to avoid some of the risks of delay and disruption. What this means is that we will not see the inflationary shock of tariff and quota introductions or the expected currency depreciation associated with a no-deal.

“This deal delivers certainty at a time when it is needed most and represents a good day for British construction.”

The BMF has requested anyone experiencing delays or other issues with imported products to email details to John Newcomb directly, at john.newcomb@bmf.org.uk, as it continues to build an evidence case to present to Government.