With the latest survey conducted ahead of the new lockdown measures announced on January 4, builders’ merchants had already expressed caution about short term sales expectations but their outlook for the next three and six months had risen markedly in December.

The impact of the New Year lockdown will be borne out by future surveys, however when looking ahead to 2021, merchants’ confidence in the market and in their own business — both month-on-month and year-on-year — improved significantly.

The Pulse, by MRA Research, is a monthly tracking survey of merchants’ confidence and prospects. Telephone interviewing took place between 1st and 4th December 2020.

The number of merchants fully open nationally continues to increase month by month, reaching 71% in December (see Chart 1). 93% were fully open in Scotland. Over 9 out of 10 of merchants say most or all of their suppliers are currently able to supply them. However, stock availability and extended lead times are still cited as problems. 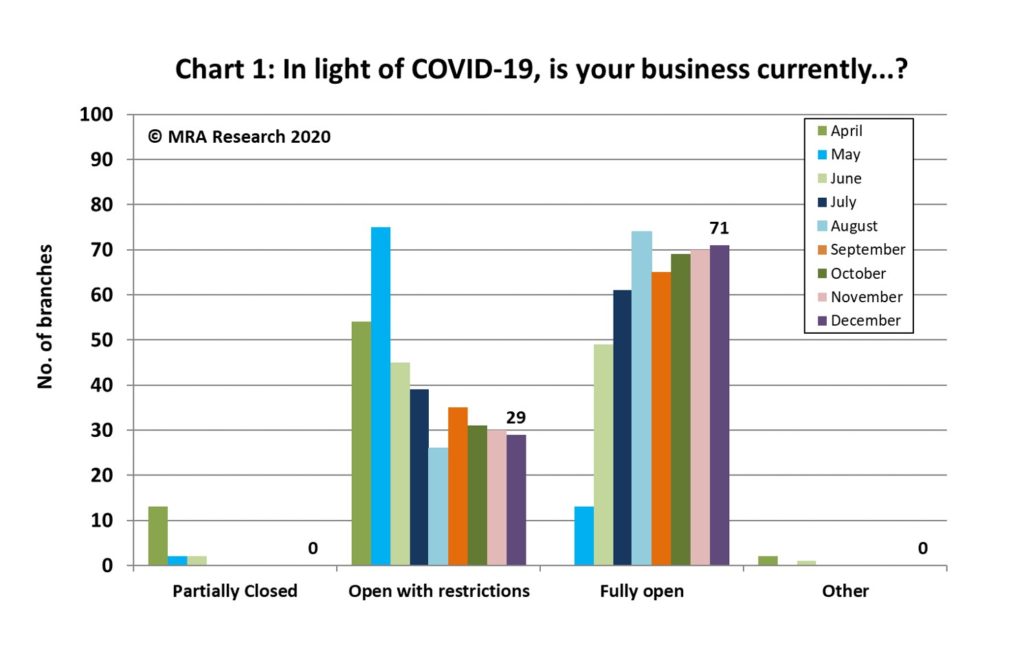 With fewer trading days, sales expectations for December compared to November weakened sharply, with a net -42% of merchants forecasting lower sales (see Chart 2). A net -27% of small branches and merchants in the North anticipated a drop whilst those in the South (-51%) and large outlets (-56%) were least positive.

Year-on-year however, merchants’ expectations are upbeat with a net +10% predicting better sales in December 2020 compared to the same month of 2019 (also Chart 2). While Independent branches anticipated a decline (net -17%), Regional and National merchants forecasted improved sales over the period (+16%).

Of those forecasting stronger sales, two thirds expected to see an improvement of 10-20%. 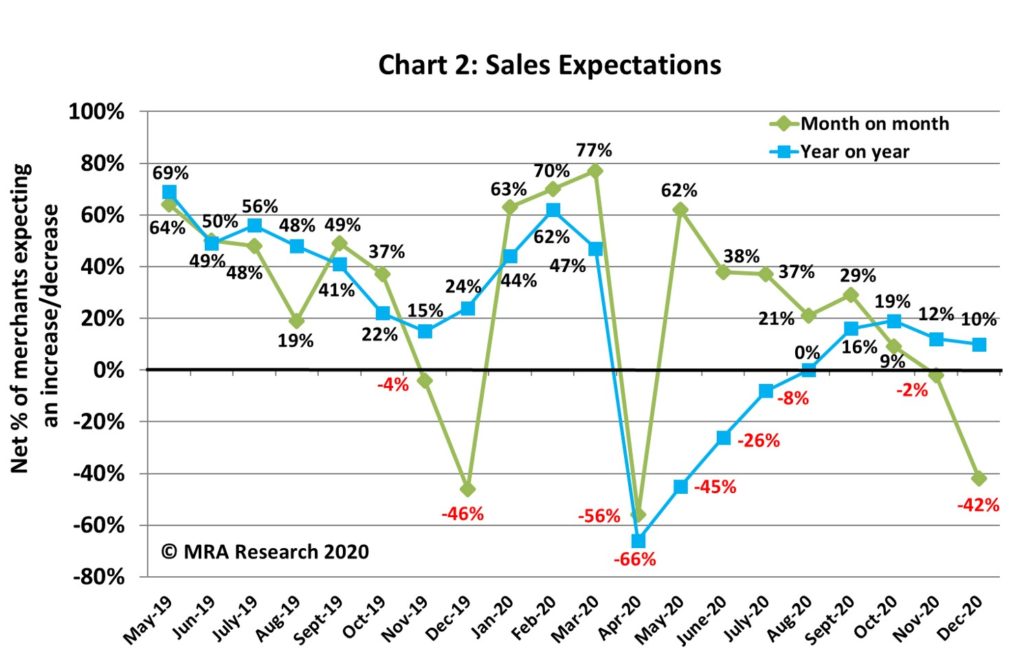 The outlook for the next three months (December 2020 to February 2021) strengthened significantly — Chart 3. National merchants, those in the North and small merchants (net +27%) are most positive.

One in four of those forecasting higher quarter-on-quarter sales expect an increase of up to 10%. Three quarters anticipate growth of 10% or more. 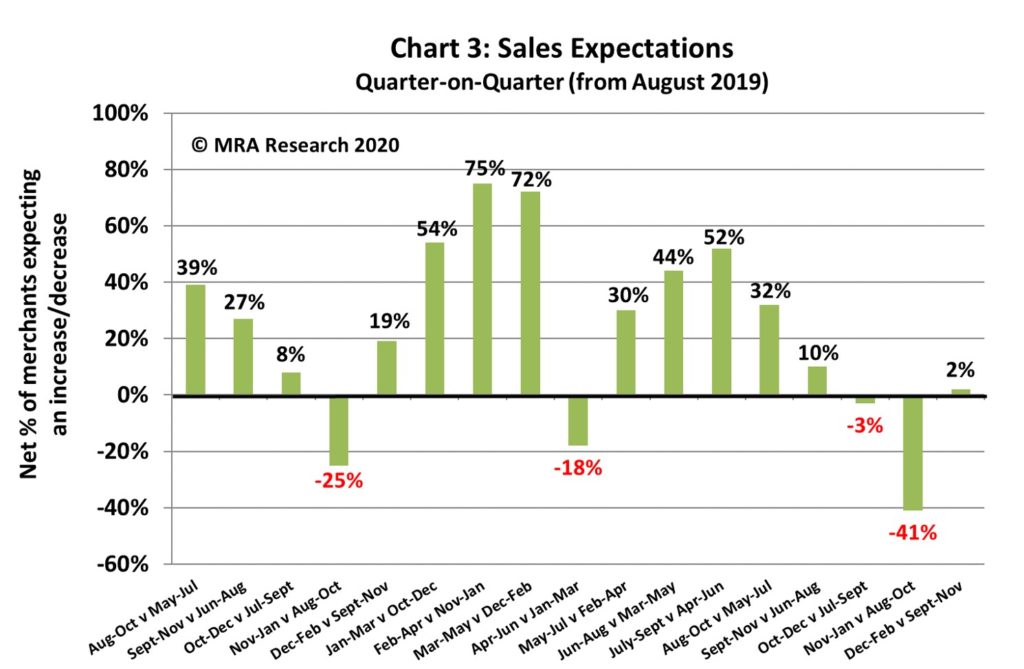 Following a steady weakening of sales expectations, merchants’ outlook for the next six months bounced back strongly in December. A net +33% forecast growth, compared to just 1% in the previous month’s survey. Those in the South (net +44%), small outlets (+41%) and Nationals (+38%) are most positive.

More than 8 out of 10 merchants expect growth of up to 20% over the period (see Chart 4). One in ten forecast even stronger growth. 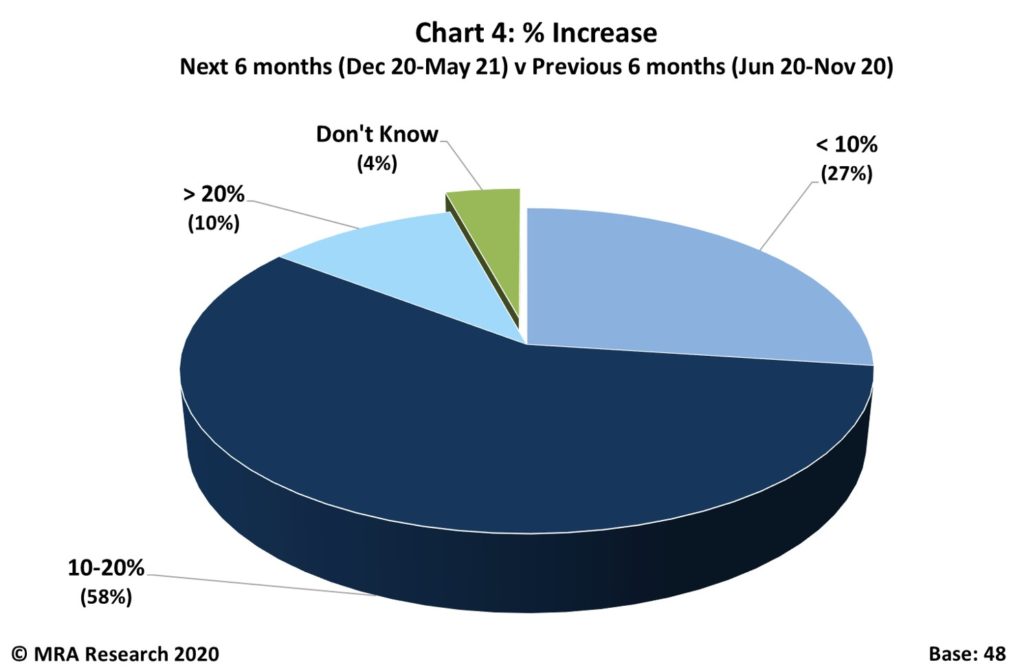 Confidence in the market strengthened markedly in December, with a net 16% of merchants more buoyant than the previous month. However, confidence varies widely by region — from a net +41% of merchants in the North who are more confident, to -40% less confident in Scotland.

While year-on-year confidence in the market remains somewhat weak, Chart 5 shows it improved significantly compared to November’s survey. Merchants in Scotland (net -47%) and the Midlands (net -46%) were least confident.

Merchants’ confidence in their own business increased sharply in December’s survey compared to November, with a net +42% more positive. Merchants in the North are particularly bullish (net +73%). 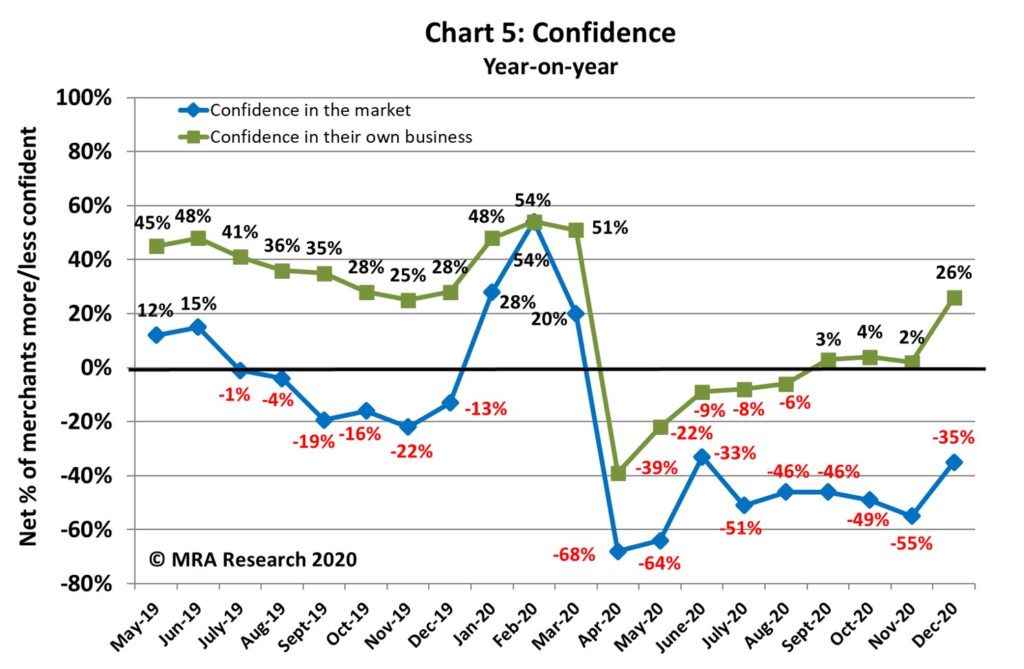 This report is the 20th in the series, with interviews conducted by MRA Research between 1st and 4th December 2020. Each month a representative sample of 100 merchants is interviewed. The sample is balanced by region, size and type of merchant, including nationals, regional multi-branch independents, and smaller independent merchants.

The full report can be downloaded for free from www.mra-research.co.uk/the-pulse or call Lucia Di Stazio at MRA Research on 01453 521621.