As featured in the October edition of PBM, the latest instalment of ‘The Pulse’ highlights a number of concerns on the path to post-lockdown recovery.

Merchants’ sales expectations weakened in August compared to July as frustrated firms battled with long lead times, material and staff shortages, and price increases. Confidence in the market was impacted. Some merchants are affected badly, others much less so.

The Pulse, by MRA Research, is a monthly tracking survey of merchants’ confidence and prospects. Telephone interviewing took place between 2nd and 5th August 2021.

Merchants were asked on a scale of 1 (not at all) to 7 (very badly) to what extent their business and customers have been affected by supply problems. The average score increased to 4.41 in August, with over half the merchants polled suffering supply problems — Chart 1. 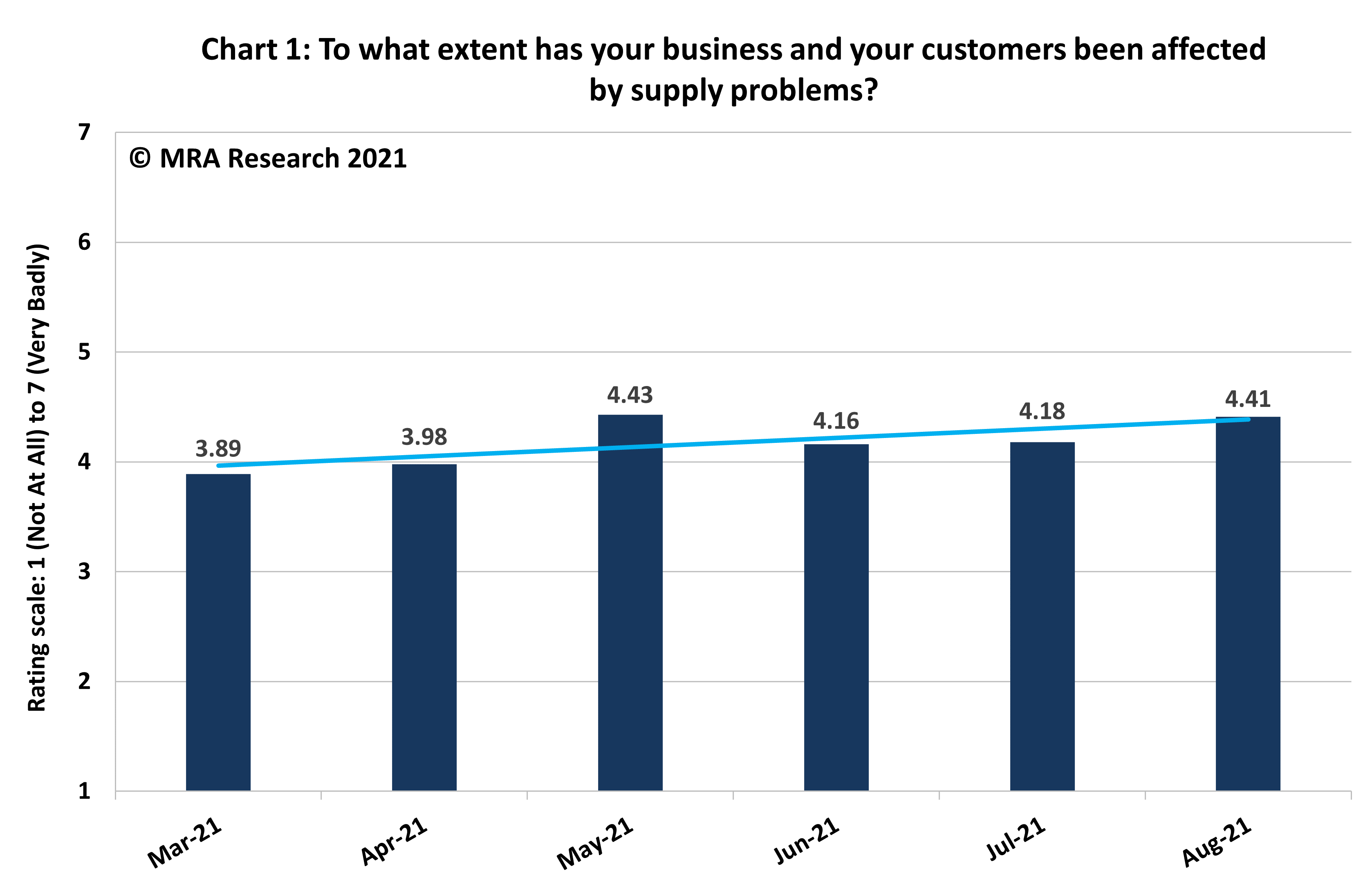 Compared to July, merchants’ sales expectations in August fell, with a net -9% forecasting lower sales month-on-month — Chart 2. The North was the only region expecting growth over the period (+18%).

Of the merchants expecting lower sales in August compared to July, 26% expected a decline of under 5% but 44% expected sales to fall by more than 10%.

Nearly one in three merchants expecting August sales to improve year-on-year expected growth of up to 9%. More than six in ten expected sales to grow 10% or more. 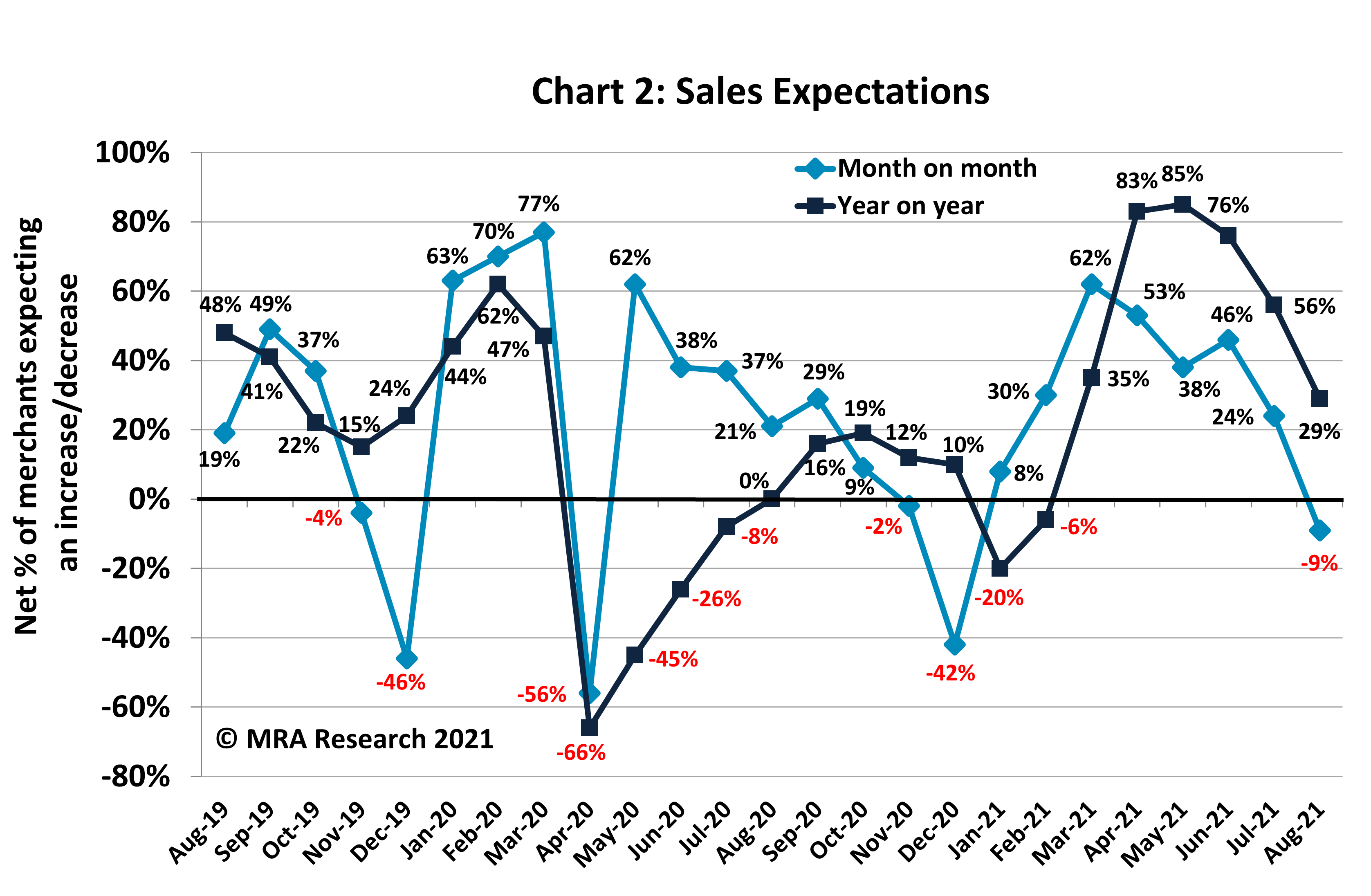 Quarter-on-quarter, sales expectations dropped sharply in August with a net +3% forecasting growth in the period August to October compared to the previous three months. While National merchants (+8%) and Regionals (+3%) predict better sales, independents expect a decline (-5%).

Just over half (54%) of those expecting sales to increase quarter-on-quarter expect sales to grow by up to 9%. Forty-four per cent expect growth of 10-20%.

Merchants’ sales expectations for the next six months (August 2021-January 2022) compared to the previous six months dropped in August. A net decrease of -17% is expected for the first time since April 2020 — Chart 3. Merchants in all regions expect sales to decline over the period. 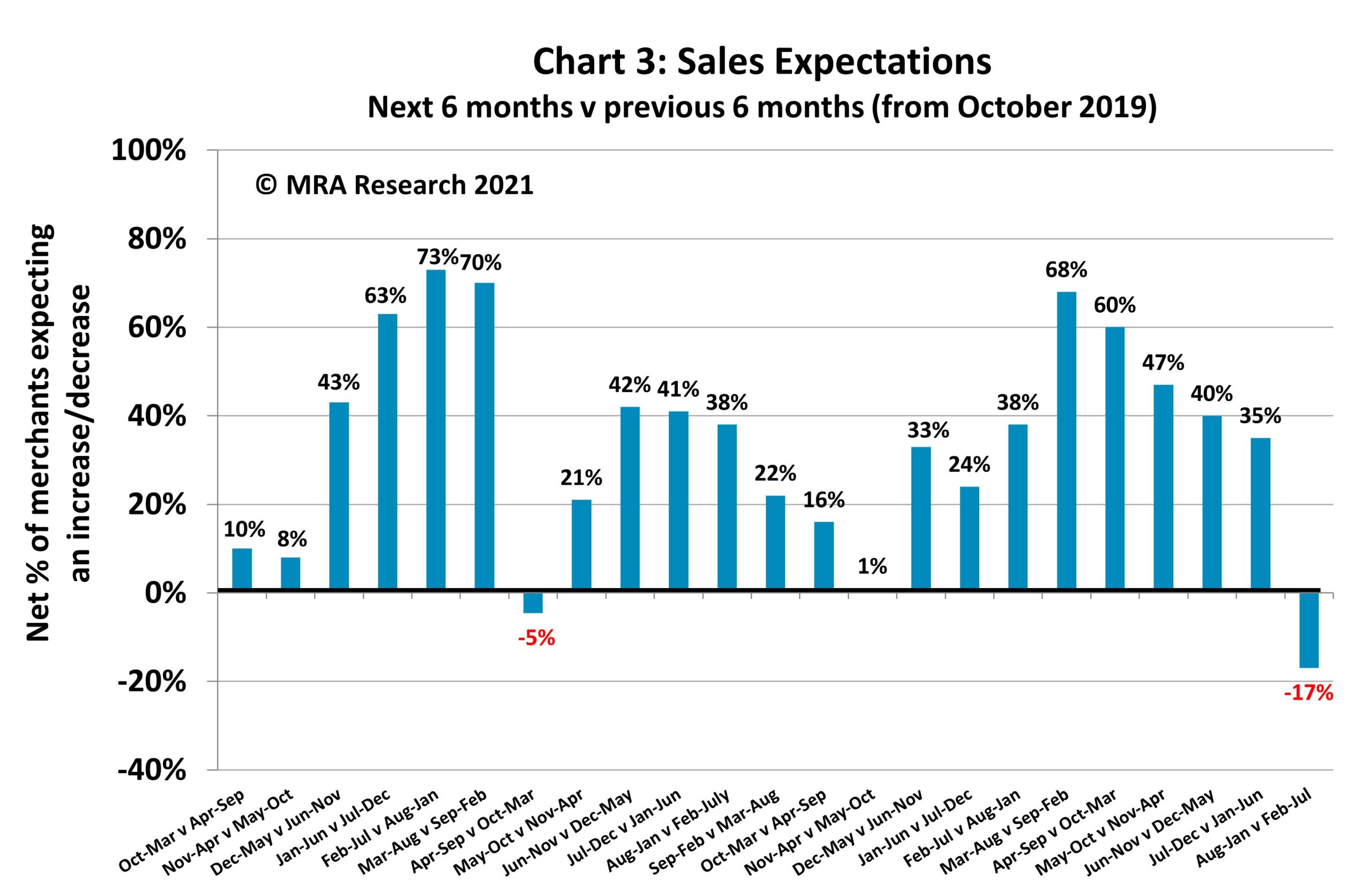 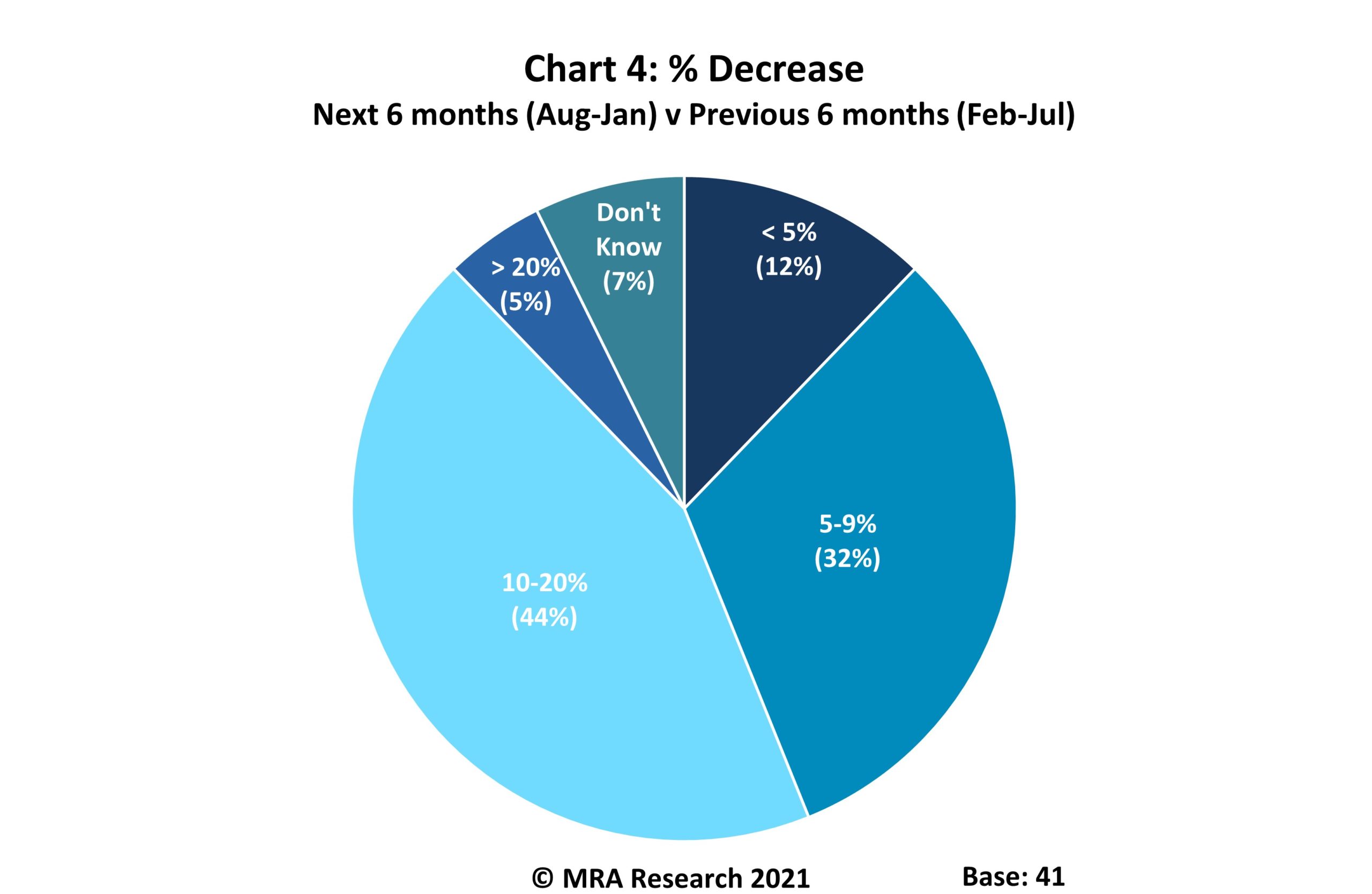 Compared to July’s survey, confidence in the market fell sharply in August with a net -21% of merchants less confident than the previous month. Independents and those in the Midlands lost confidence the most (-29%).

Year-on-year, confidence in the market fell to a net +8% in August, from +33% in the previous month’s survey, but is still positive — Chart 5. Merchants in Scotland were most confident (+38%).

Merchants’ confidence in the prospects for their own business dropped slightly in August compared to July, but is still high at a net +26%. Nationals (+38%) were more confident than Independents (+14%). Merchants in Scotland (+38%) were most confident regionally. 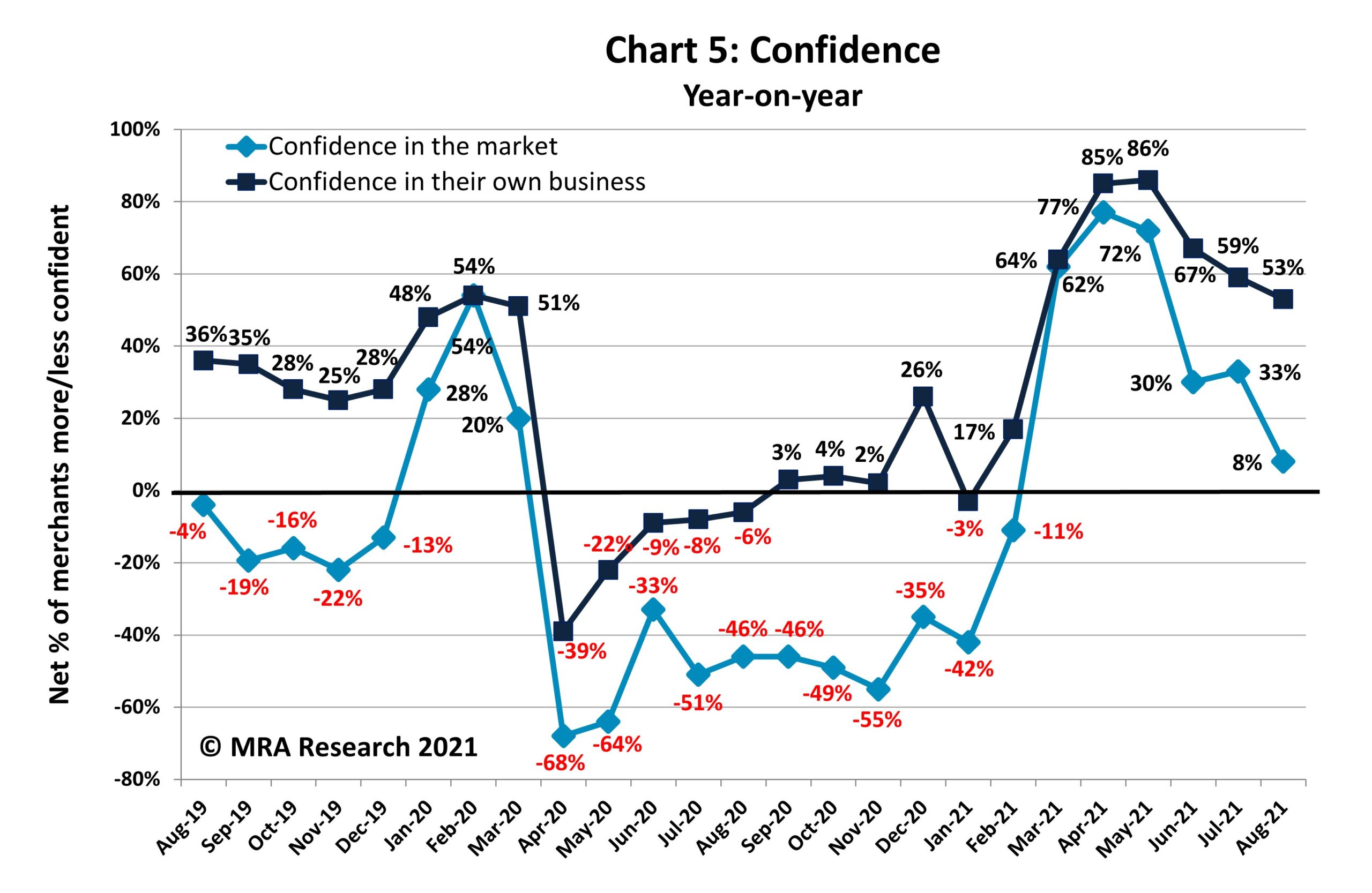 This report is the 28th in the series, with interviews conducted by MRA Research between 2nd and 5th August 2021. Each month a representative sample of 100 merchants is interviewed. The sample is balanced by region, size and type of merchant, including nationals, regional multi-branch independents, and smaller independent merchants.