Produced for PBM by MRA Research, the latest installment of The Pulse – a monthly tracking survey of merchants’ confidence and prospects – reveals that merchants are continuing to experience booming sales but supply shortages are a growing concern.

Telephone interviewing for this report took place between 1st and 4th June 2021.

Merchants’ confidence in the market and in their business, and sales expectations are all at exceptional levels. However, 42% of merchants were hit by supply problems in June, of which 15% of them badly or very badly affected – Chart 1. 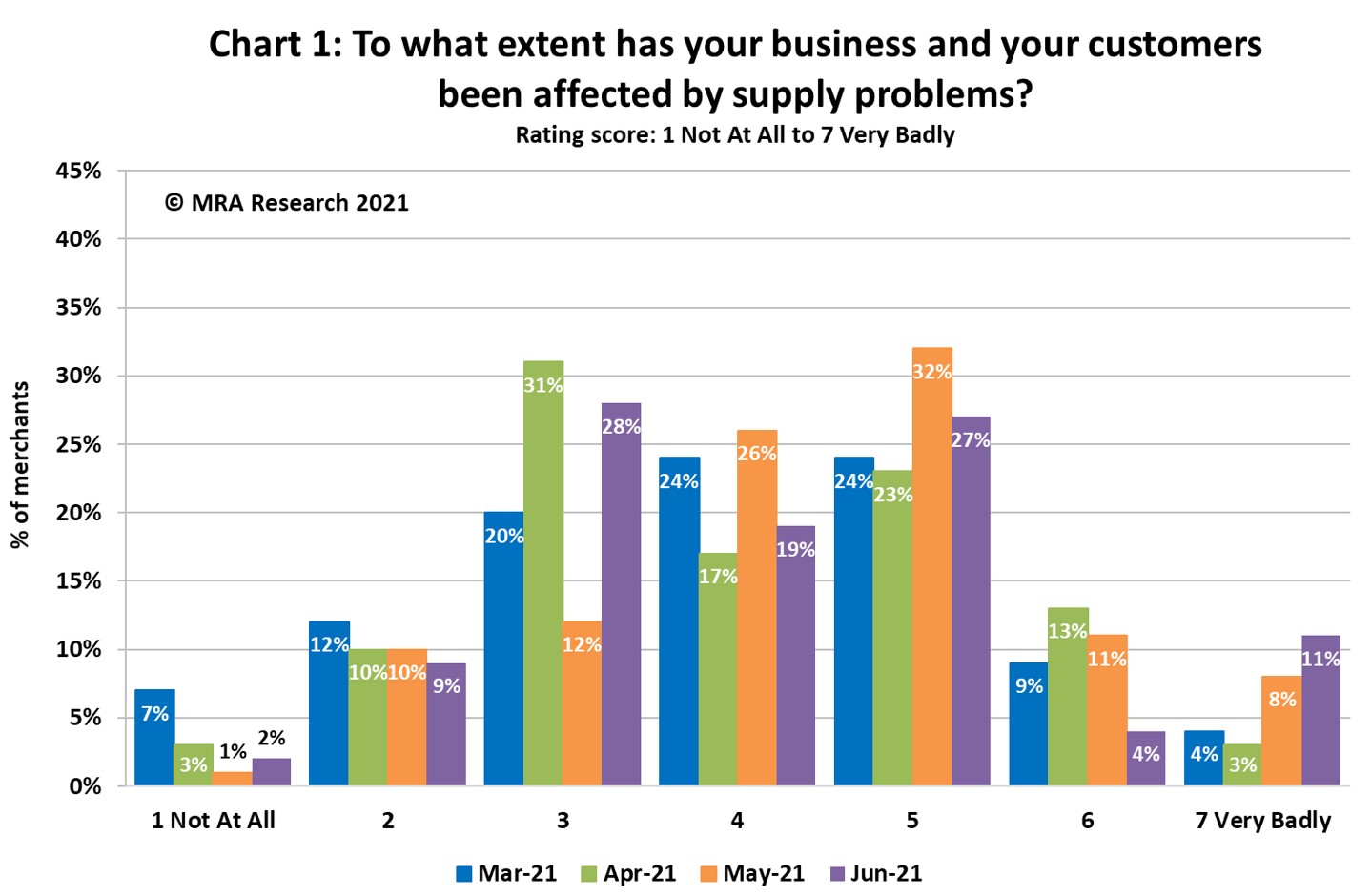 Lead times and price increases are particular concerns. Merchants comment on lead times of up to three months, and with products on reduced allocation.

Sales expectations increased in June compared to May, with a net +46% of merchants forecasting improved sales – Chart 2. Merchants in Scotland (+63%) and in the North (+59%) have the strongest expectations. Of those merchants predicting sales growth in June, 43% expected an increase of 10-20% compared to May. 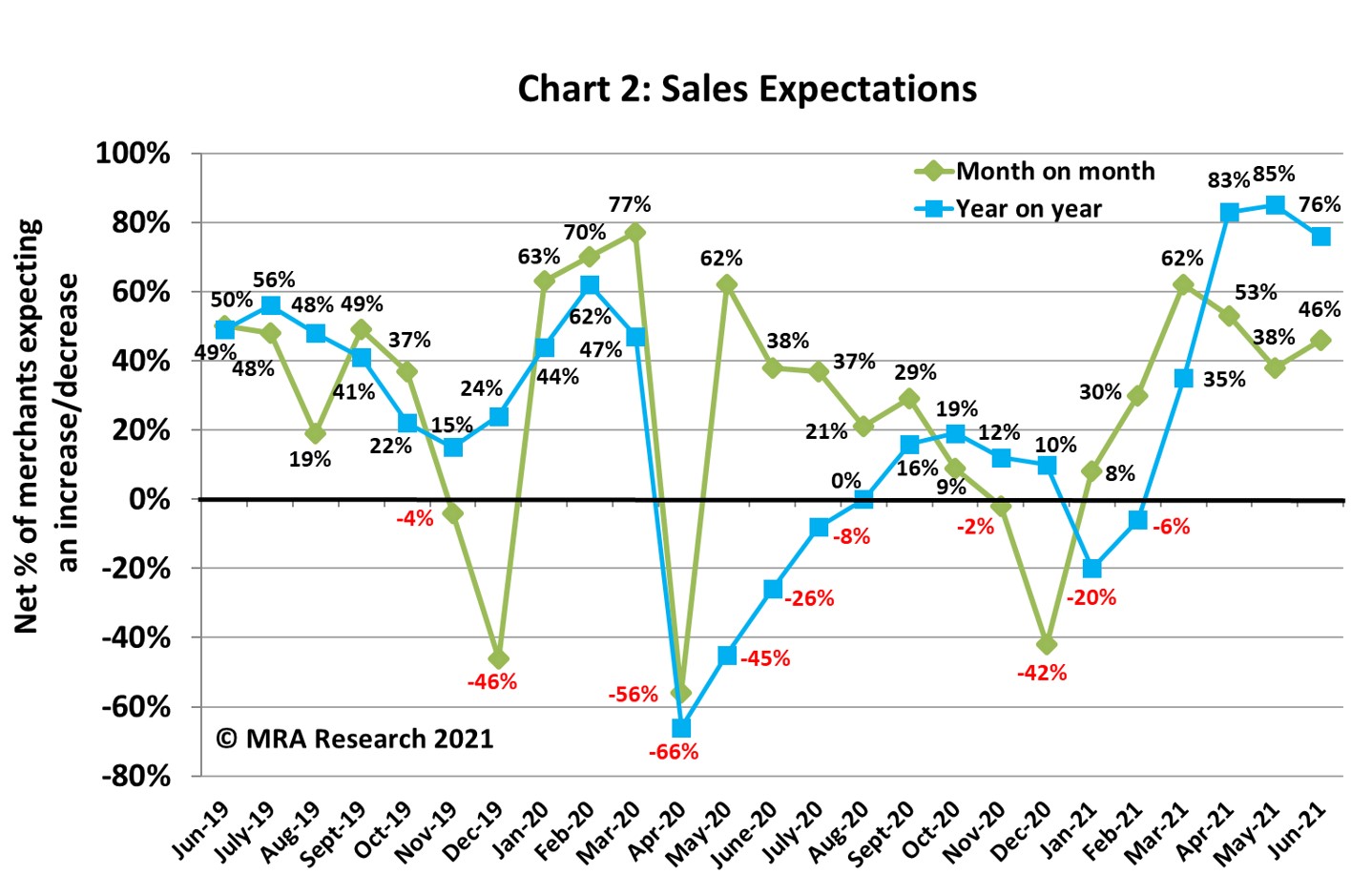 The percentage of merchants expecting sales growth year-on-year eased for the first time since January. However, the outlook remained extremely strong with net +76% of merchants forecasting improved sales in June compared to the same month last year – also Chart 2 above.

Merchants in the Midlands (+83%) and North (+82%) had the strongest expectations. More National and Regional merchants (+89% and +72% respectively), expected higher sales than Independent outlets (+63%). 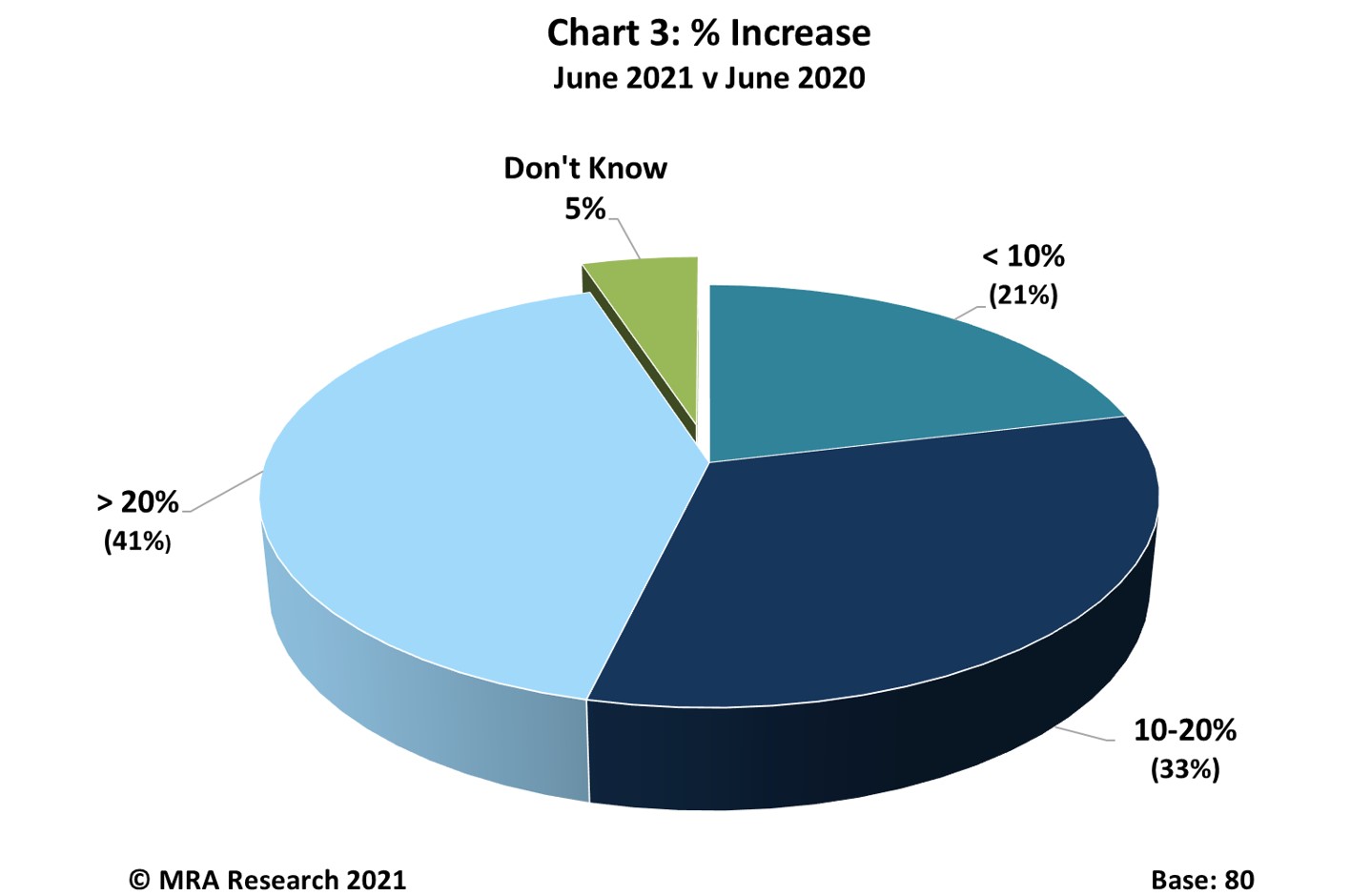 Expectations for the next six months (June-November) are also holding well, with a net +40% of merchants forecasting better sales compared to the previous six months (December 20 to May 21) – Chart 4 below. Those in the North and Midlands are most confident (+50%). Nationals (+54%) are more positive than Regional merchants (+26%). 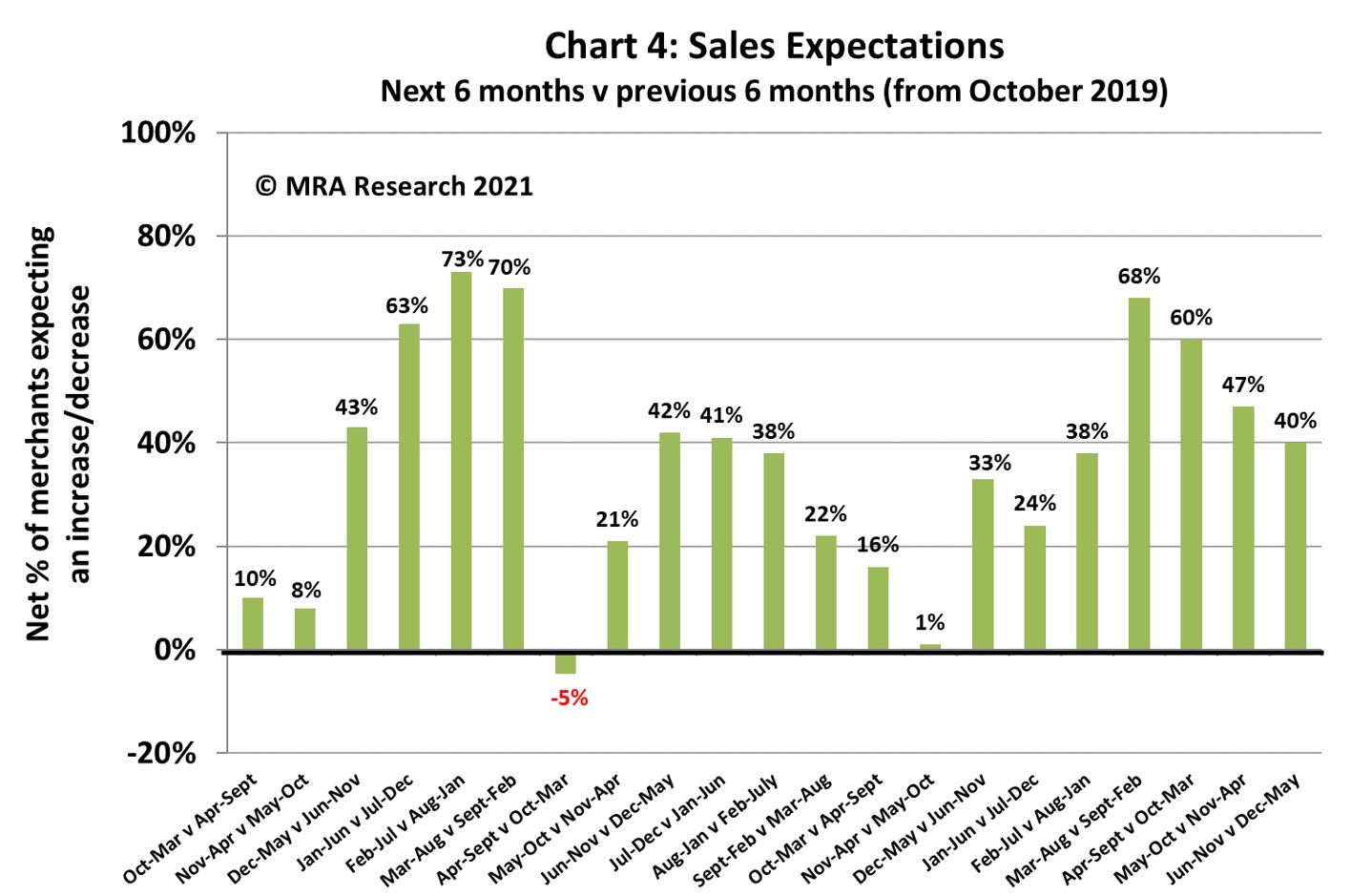 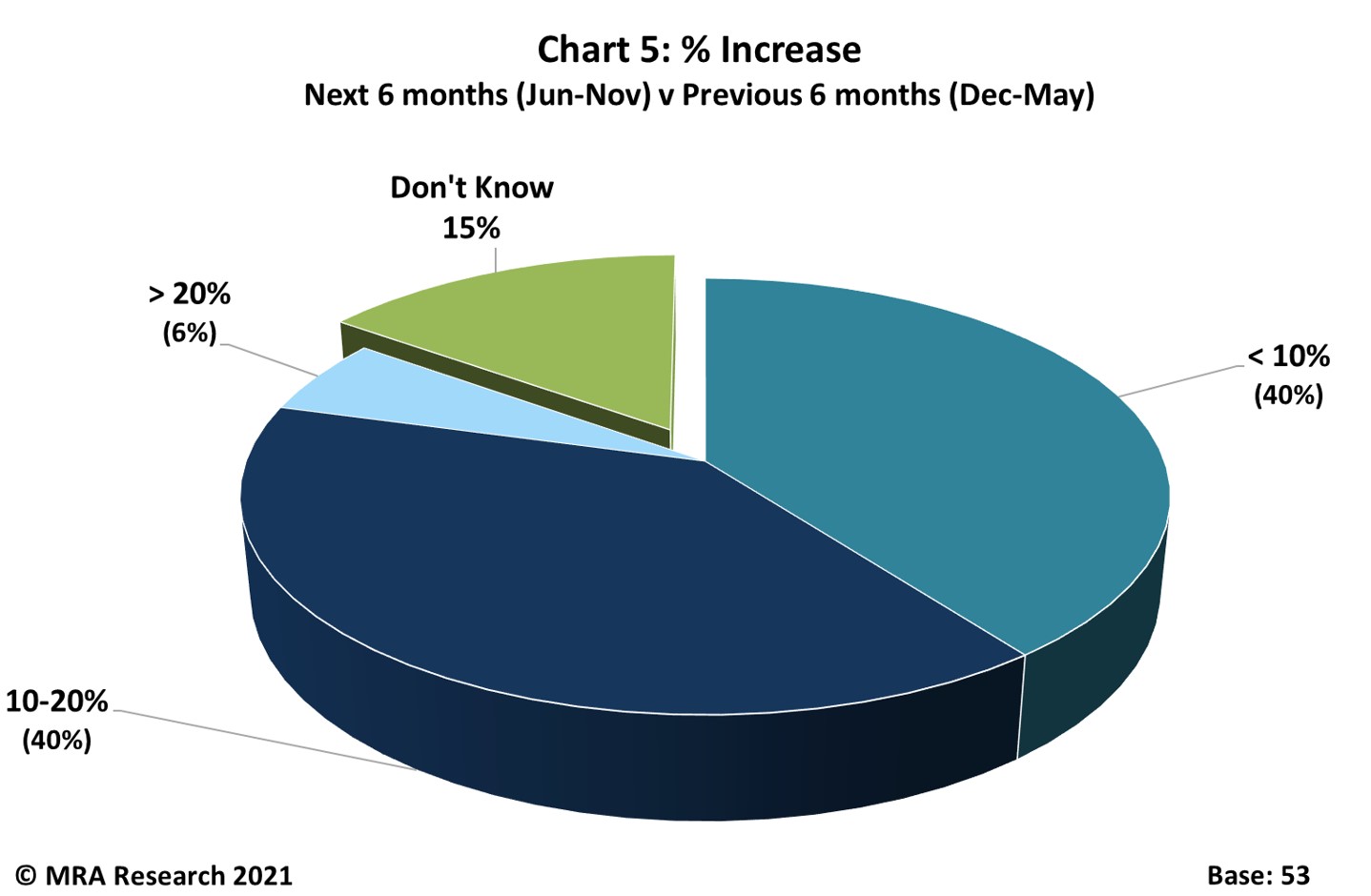 Compared with strong confidence levels in March, April and May, confidence in the market declined in June compared with the previous month, and for the first time since January 2021. A net -13% of merchants were less confident month-on-month. Merchants in the North (+32%) were the only ones more confident compared to May.

Year-on-year, confidence in the market dropped sharply compared to the previous month’s survey, but merchants remain positive (net +30%) – Chart 6. Merchants in the North were most confident (+64%). 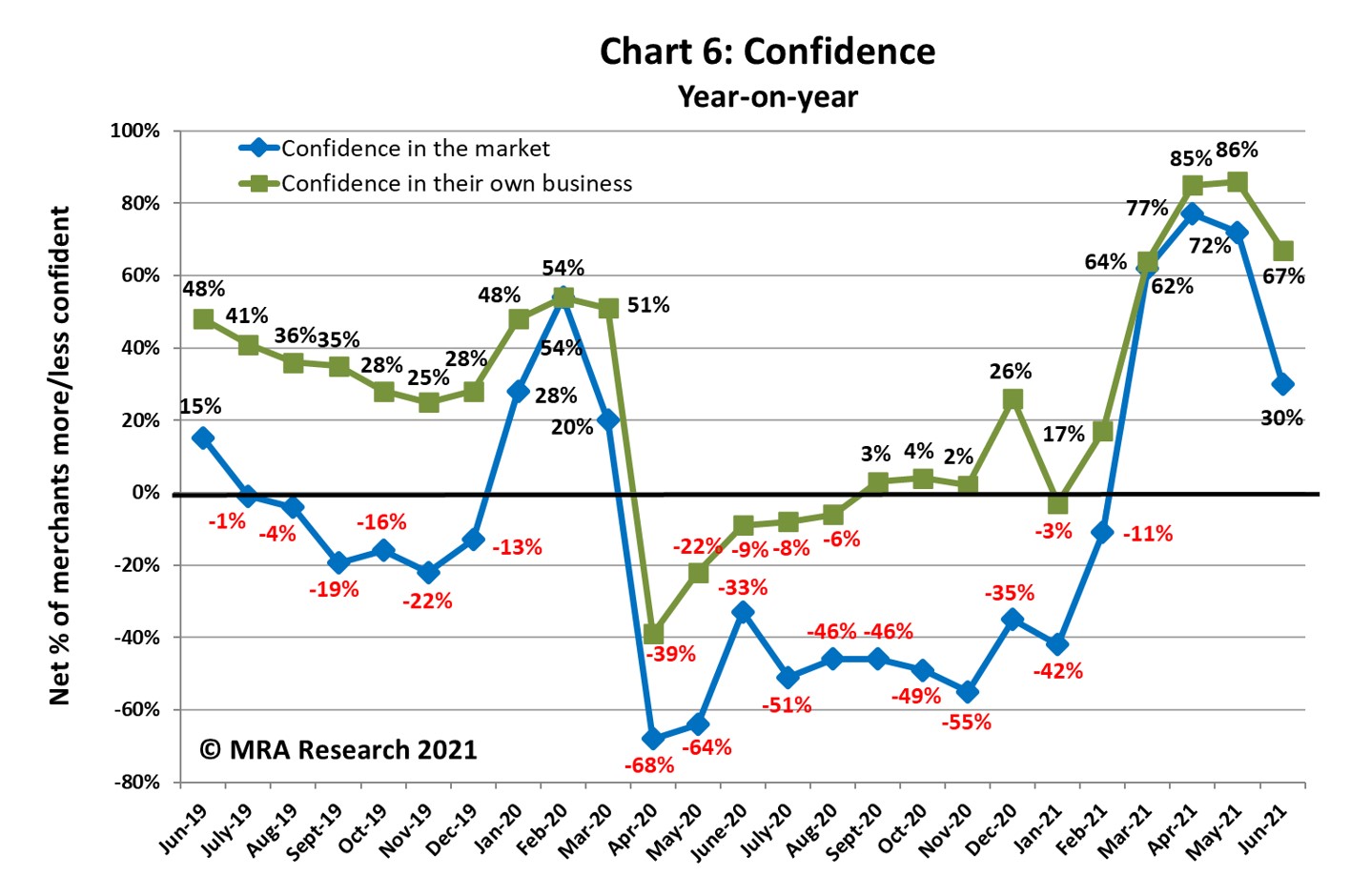 Merchants’ confidence in the prospects for their own business dropped in June compared to May but remained upbeat (net +27%). Nationals (+41%) were more confident than Regionals (+15%).

Year-on-year, a net +67% of merchants were more confident in June compared to June 2020, although confidence eased slightly compared to the previous month’s survey – also Chart 6 above.

This report is the 26 th in the series, with interviews conducted by MRA Research between 1st and 4th June 2021. Each month a representative sample of 100 merchants is interviewed. The sample is balanced by region, size and type of merchant, including nationals, regional multi-branch independents, and smaller independent merchants.