As featured in PBM’s April edition, across all aspects measured by The Pulse in the latest survey merchants were noticeably more positive in February than they were in January.

Expectations were also strong for the next three months (February to April) and the next six months (February to July), whilst merchants’ confidence in both their own business and in the market had improved considerably compared to the previous month (January) and to February last year.

The Pulse, by MRA Research, is a monthly tracking survey of merchants’ confidence and prospects. Telephone interviewing for the latest snapshot took place between 1st and 4th February 2021.

Forty-six percent of merchants said all their suppliers were currently able to supply them, with a further 50% saying most could (Chart 1). However, merchants commented on stock availability and extended lead times with responses including: “Supply chain shortages. All suppliers are still operating, but having to work round shortages and lengthy delivery times.” 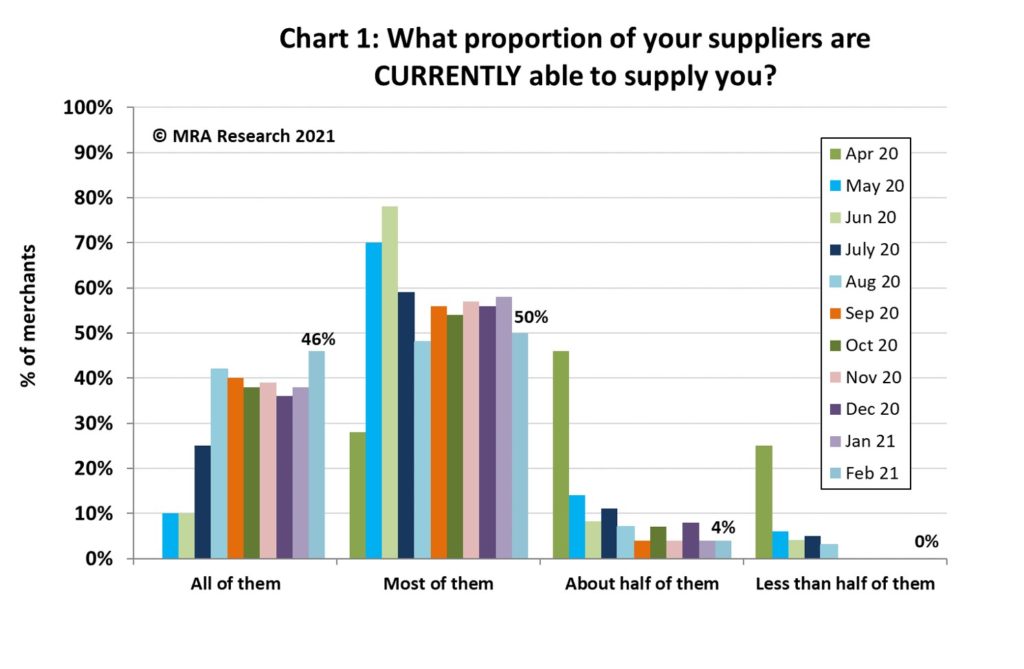 Sales expectations for February compared to January were strong (net +30%) and continuing to improve (Chart 2). The North was most positive with a net +55% of merchants anticipating better sales. By merchant type, sales expectations among Independents were strongest (+42%), followed by Regional merchants (+32%) and Nationals (+21%).

Of the merchants anticipating an increase, 9 out of 10 expected February’s sales to be up to 20% more than January. Nearly one in ten expected sales to increase by more than 20%.

Three quarters of merchants forecasting weaker year-on-year sales expected sales to fall by up to 20%. A quarter forecasted a decline of more than 20%. 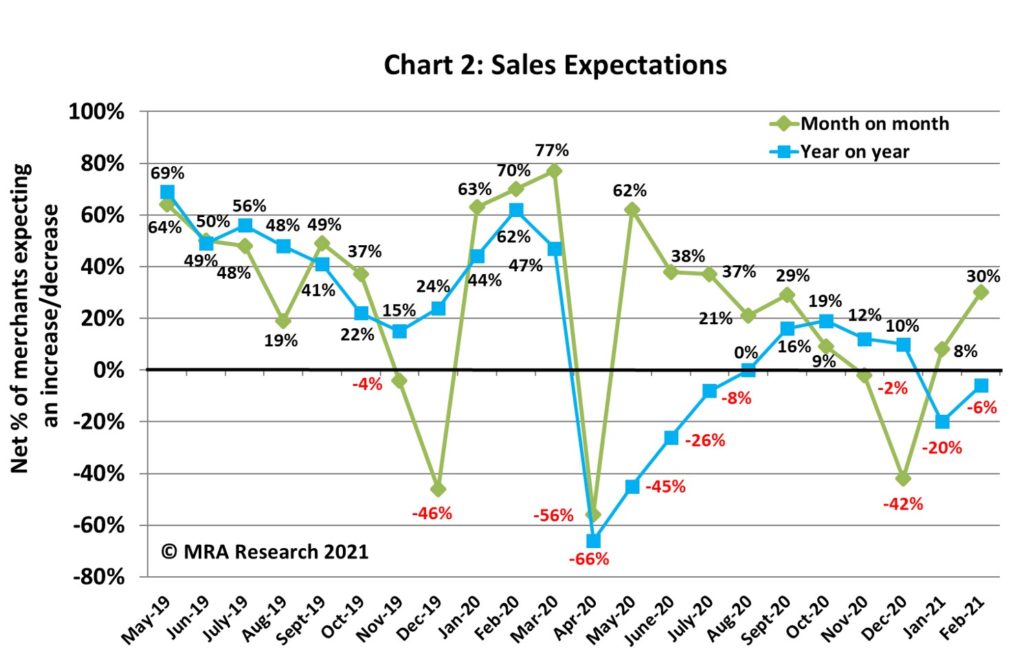 The outlook for the next three months (February to April 2021) improved markedly, with a net +30% of merchants expecting to sell more, compared to only +8% in the previous month’s survey. Notably more merchants in the South (net +47%) forecast higher sales over the period than those in the North and Scotland (+15% and +13% respectively). Mid-sized outlets (+41%) and Independent branches (+38%) were bullish about prospects.

One in three of those forecasting higher quarter-on-quarter sales, expect sales to increase by up to 10% (Chart 3). Over a half those expecting to sell more, anticipate growth of 10-20% or more. 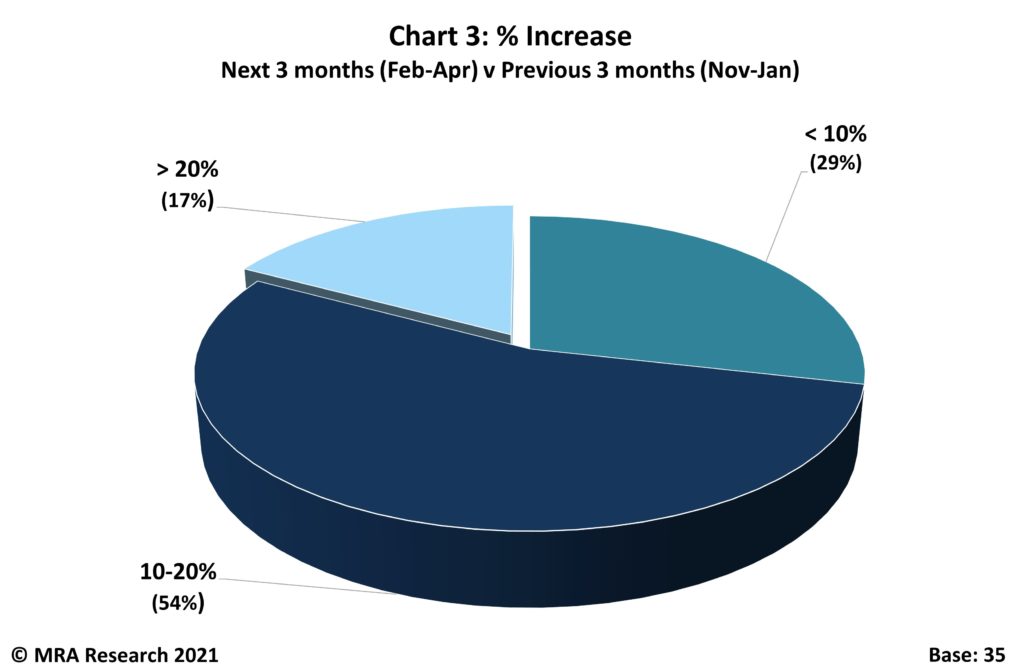 Merchants’ sales expectations for the next six months continued to strengthen (net +38%). Mid-sized outlets (net +56%) and those in the South (+50%) were most positive — Chart 4.

Eight out of 10 of those predicting an increase in sales expect growth of up to 20%. More than one in five expect even stronger growth. 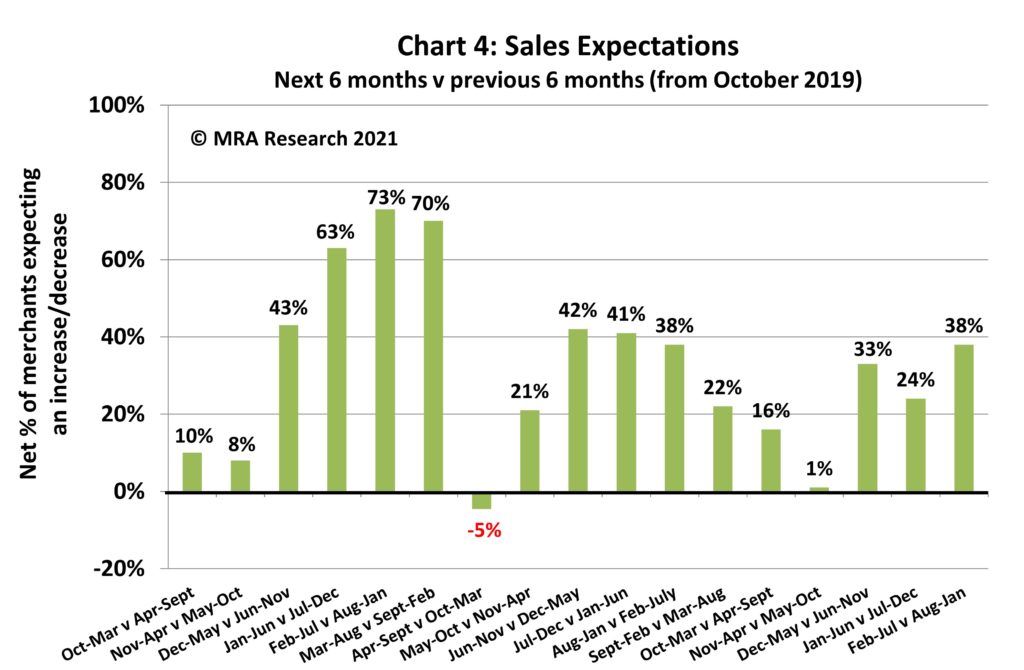 Market confidence increased significantly in February compared to January (net +23%). Merchant confidence in the Midlands (+40%) and the South (+34%) bounced back, along with small merchant branches and Independents (both +33%).

While confidence in the market remained weak compared to February 2020 (net -11%), it was recovering steadily (Chart 5). But merchants in Scotland (-60%) and large outlets (-22%) were still downbeat.

Merchants’ confidence in the prospects for their own business strengthened sharply in February compared to January (net +36%). Merchants in the Midlands and South (+52% and 50% respectively) were much more confident than those in the North (+18%) and Scotland (0%).

Compared to February last year, merchants’ confidence in their own business had bounced back (net +17%) and had been steadily strengthening since April last year — also Chart 5. Independents (+38%) and small branches (+28%) were most confident. For more information and to download the full report, visit mra-research.co.uk/the-pulse

0 0 0 0
Previous : BMF MasterMerchant is back
Next : 150 partners join Lakes Partners