On the 29th October 2021, Andy Williamson was installed as the new Master of the Worshipful Company of Builders’ Merchants (WCoBM).

During the prestigious Installation ceremony held at Plaisterers’ Hall – one of London’s largest Livery Halls – Court Assistants Richard Hill and Alan Hawkins were elected to support the Master in his year, as Senior and Junior Warden respectively (main image). The formal ceremony also acknowledged the role of other Court Assistants, including the Company’s new Bursar and Assistant Clerk Julie Langford.

Following the ceremony, the Master and his wife Shelley were joined by over 200 Liverymen, Freemen and guests at a white-tie drinks reception and dinner to celebrate the occasion. During the Installation dinner, the Master confirmed WCoBM’s new affiliation with The Royal Air Force Battle of Britain Memorial Flight (BBMF), presenting Squadron Leader Mark Sugden, Commanding Officer of the BBMF, with a specially sealed certificate (image below).

The Master is a well-known figure in the builders’ merchants’ industry having worked in the building materials sector all of his life. His current role is Commercial Director – UK of insulation and roofing distributor SIG plc. Andy became a Liveryman in 2008 and was invited onto the Court in 2013, the path to becoming Master.

Andy said: “It’s an absolute honour to represent the Company and our industry for the ensuing year. I was very fortunate to have been able to kickstart my year with a ‘live’ event, joined by so many friends, colleagues and special guests. It’s been a turbulent 18 months with the pandemic but I hope events and activities can resume more normally during the course of next year.

“I will do my utmost to continue the good work of Past Masters in raising the profile of WCoBM and that of builders’ merchants within the City and the Livery movement.” 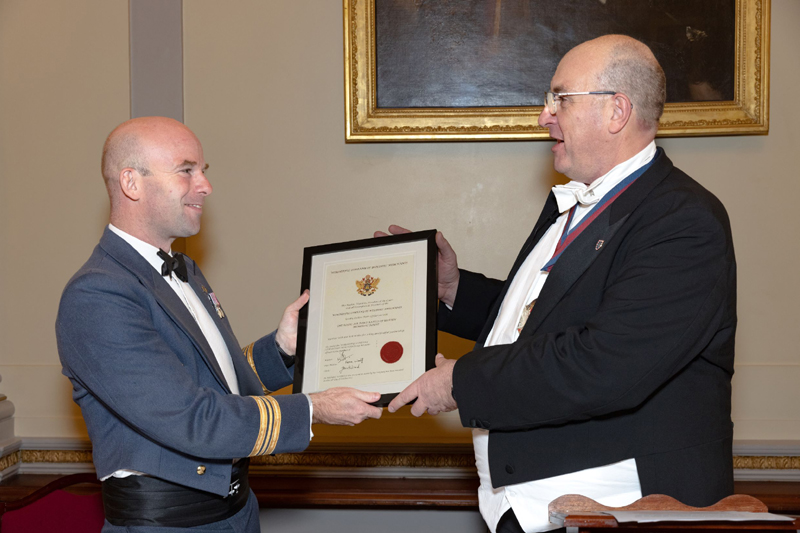