Richard Cook, Technical Director at SSQ, introduces ‘phyllite’ and outlines why it’s one of the most sought-after roofing materials of all.

Phyllite — it’s a material a lot of people in the trade aren’t very familiar with, and one that some possibly haven’t heard of at all, but those who try it quickly learn why it’s become one of the world’s most sought-after roofing materials over the last twenty years.

To the untrained eye, phyllite looks a lot like slate — but it’s stronger, harder and denser. It is extremely durable, offers great aesthetics, provides outstanding weather resistance, and it doesn’t fade or discolour.

In short, the material has everything needed to excel in virtually any context, from contemporary new-build to historic renovation. That’s why so many roofers, builders, architects and others have embraced phyllite in recent decades.

SSQ’s Argentinian phyllite — known as Riverstone — is renowned around the world. Since we first brought it to the UK over twenty years ago, Riverstone has become a highly-prized alternative to some of the country’s most popular indigenous slates. 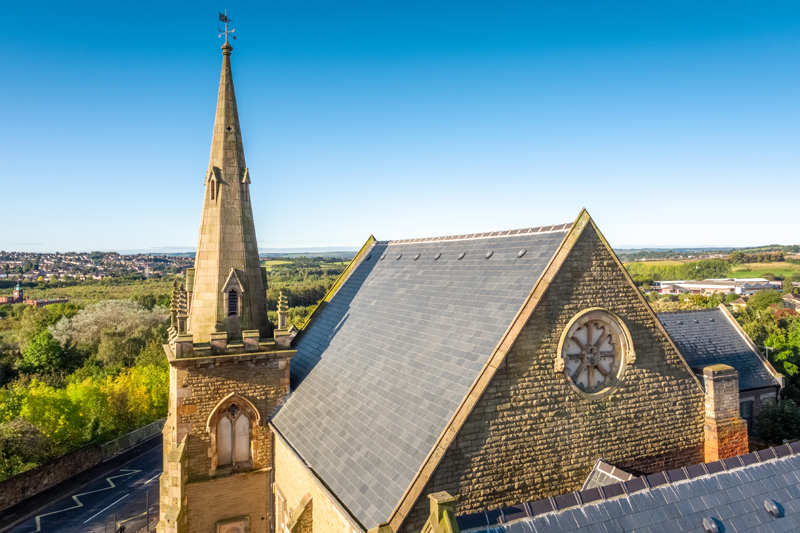 Comprehensively assessed by independent geologist Barry Hunt, Riverstone was found to exhibit “many features that are equivalent or superior” to three leading indigenous slates. The material offers the sort of pronounced grain, low water absorption, low calcium carbonate content and pronounced dressed edges as indigenous slate — but with significant advantages.

With a geological age of over 600 million years, it’s even older than much indigenous slate, giving it exceptional strength and weather resistance. And, given that the lead times for some indigenous slates are literally years long, it is little surprise that in Cornwall, Wales, Scotland and other areas where slate roofs are widespread, Riverstone has become a highly popular alternative.

When it comes to lead times, Riverstone outcompetes a lot of other materials, too. Despite the huge disruption we’ve seen over the last 12 months with Covid, Brexit and more, SSQ has managed to maintain consistent supply despite the ongoing challenges.

“Phyllite offers the sort of pronounced grain, low water absorption, low calcium carbonate content and pronounced dressed edges as indigenous slate but, with a geological age of over 600 million years, it’s even older than much indigenous slate, giving it exceptional strength and weather resistance.”

A number of far-sighted investments made many years ago have helped greatly during this tumultuous period — first, the decision to buy the Argentinian quarry that produces Riverstone, which gives us unparalleled control over the amount of material produced and where it goes. And second, our decision to establish depots all around the UK, allowing us to maintain high levels of stock, and meaning we’re able to guarantee quick delivery to customers wherever they are in the country.

Indeed, with thousands of pallets of Riverstone already in the UK, lead times have been maintained at just 3-5 days.

Riverstone’s performance has seen it receive excellent results from some of the world’s toughest testing regimes. For example, it achieves the highest possible classification in BS EN 12326 – W1-T1-S1 — what’s more, on our finest Ultra-grade Riverstone, SSQ offers a remarkable 100-year weather tightness guarantee.

As well as roofing, Riverstone is also available as a versatile solution for landscaping and cladding. For these applications, it is available in two thicknesses — 1cm and 1.2cm, in 20 and 30 widths by random lengths. In addition, the product comes in two stylish finishes — natural split, whereby the product has been expertly hand-split to produce a traditional riven surface, and brushed antique, which results in a smooth, matte look.

A version of this article appeared in the June edition of PBM. Click here to reade the full digital issue online.