As featured in the March edition of PBM, the latest instalment of The Pulse shows that, in January, merchants were reporting a strong outlook with improvements in supply. However, an air of caution remains.

Merchants’ sales expectations for the first quarter (January-March) and the first half (January-June) are robust, and confidence in the prospects for their own business are very strong.

No lockdowns, the easing of restrictions and the pandemic being under control, have sustained merchants’ confidence. But uncertainty over emerging Brexit consequences, ongoing supply chain problems and rampant price inflation are breeding concern that these issues will ultimately impact on demand.

The Pulse, by MRA Research, is a monthly tracking survey of merchants’ confidence and prospects. Telephone interviewing took place between 4th and 7th January 2022.

Merchants were asked on a scale of 1 (not at all) to 7 (very badly) to what extent their business and customers have been affected by supply problems. Supply problems were revealed to have improved in January, with the lowest average score (3.79) in 10 months — Chart 1.

However, price increases are washing through the industry, while extended lead times are continuing to impact many merchants. 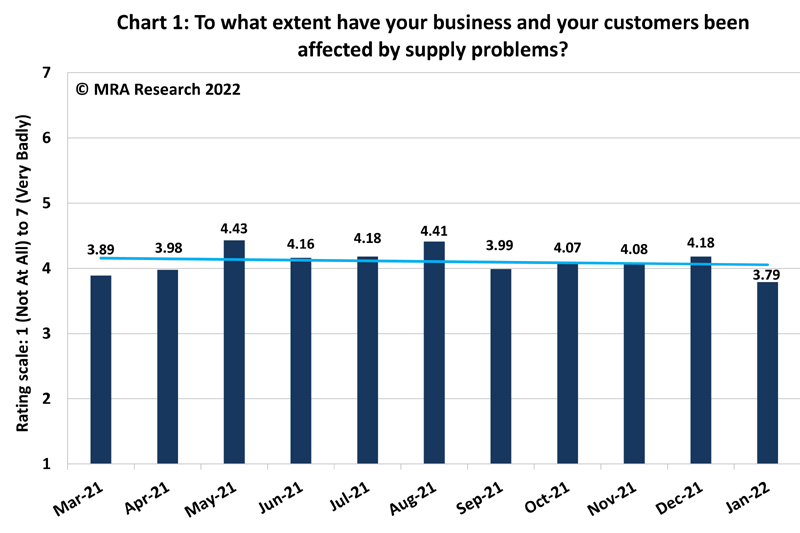 Sales expectations increased significantly in January compared to the previous month with a net +50% of merchants expecting sales to improve over the period — Chart 2. This reflects the start of a new year following a short trading month in December. Expectations were particularly strong among Mid-sized branches (+62%), the Midlands (+71%) and Nationals (+64%).

Compared with January 2021, sales expectations this January were significantly up with a net +37% of merchants expecting sales to improve — also Chart 2. Expectations were strongest among Mid-sized outlets (+48%) and Regional merchants (+54%).

Among those expecting growth in January compared to the same month in 2021, a third of merchants anticipated growth of up to 9% and a further third expected growth of 10-20%. Fourteen percent predicted more than 20% growth. 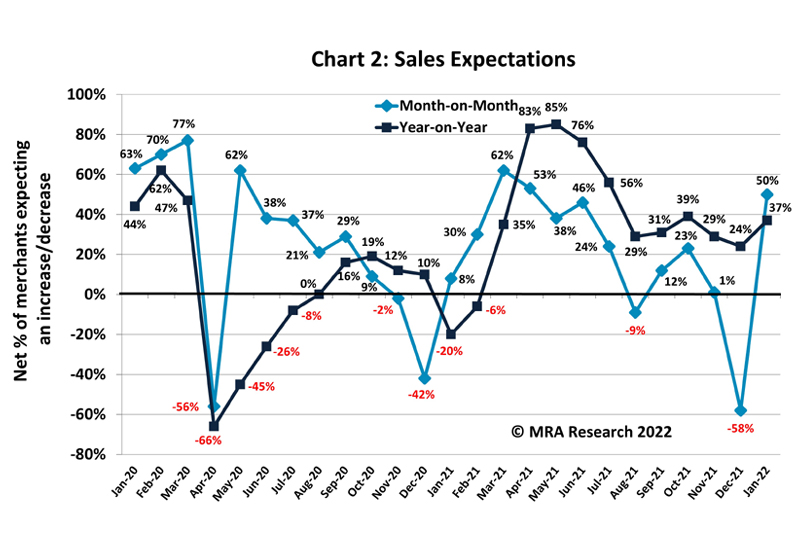 Quarter-on-quarter, merchants expect a strong first three months, with a net +42% of merchants expecting higher sales in January-March 2022 compared to the previous three months (October-December 2021). Expectations are strongest among merchants in the Midlands and North (+50% and +59% respectively) and National branches (+54%).

Among merchants expecting sales growth in the first quarter of 2022 compared to the previous three months, nearly two in five expect sales to increase by up to 9%. A further 40% expect sales to grow by 10-20%.

Sales expectations for the next six months (January-June 2022), compared to the previous six months (July-December 2021), strengthened further in January with a net +42% of merchants expecting growth — Chart 3. Merchants in Scotland outlets (+62%) and Regional outlets (+59%) had the strongest expectations. 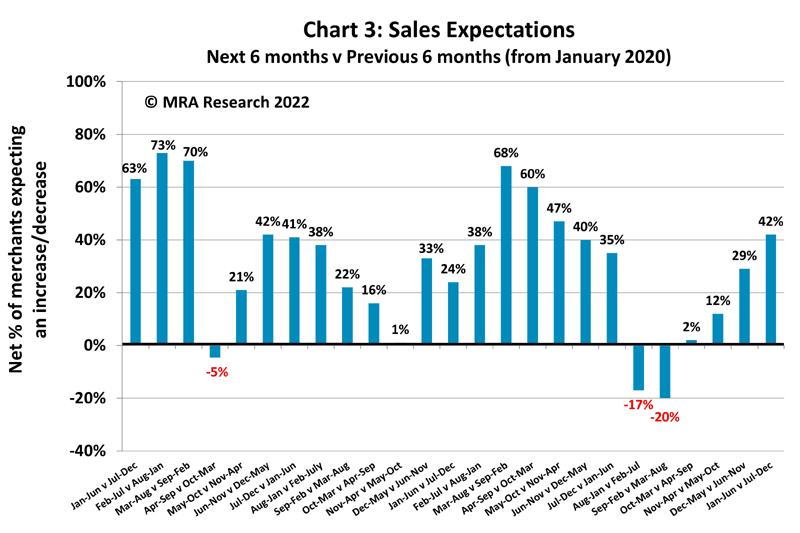 Unusually, one in four merchants expecting sales to improve over the next six months were unable to forecast a figure — Chart 4. 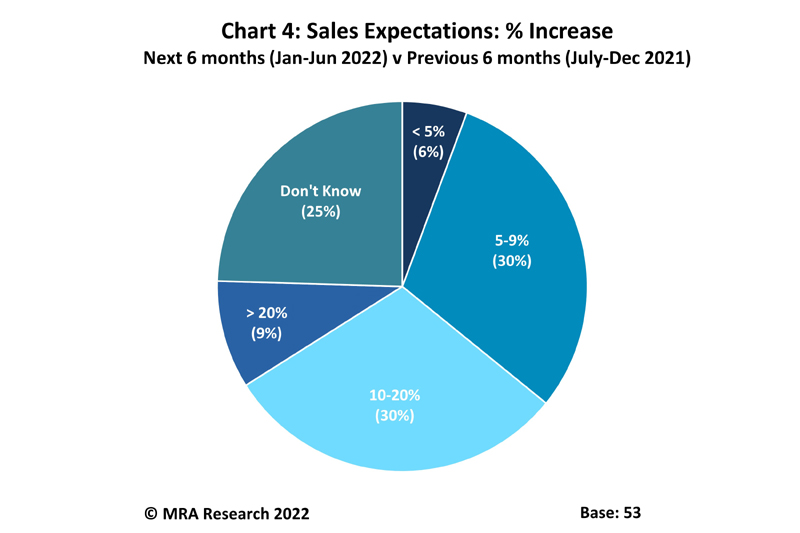 Compared with December’s survey, month-on-month confidence in the market dipped slightly in January with a net +16% of merchants more confident. However, confidence remains positive compared to a year ago (January 2021), when month-on-month it was at a low ebb (-17%).

Merchants’ confidence in their own business continued to strengthen in January with a net 46% of merchants more confident than December. Confidence was particularly strong among Nationals (+56%), Large outlets (+57%) and merchants in Scotland (+59%).

Compared to the same month in 2021, merchants’ confidence in their own business improved marginally (net +59%) and continues at a very strong level — also Chart 5. Merchants in the South (+74%) were most confident. 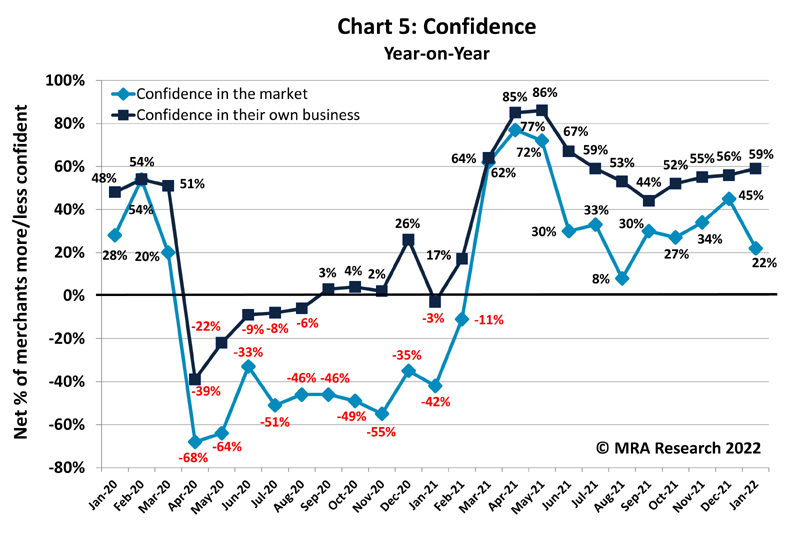 This report is the 33rd in the series, with interviews conducted by MRA Research between 4th and 7th January 2022. Each month a representative sample of 100 merchants is interviewed. The sample is balanced by region, size and type of merchant, including nationals, regional multi-branch independents, and smaller independent merchants.

NB: The difference between the percentage of merchants expecting growth and those expecting a decrease is the net figure, expressed as a percentage. A positive net percentage indicates growth, a negative indicates decline. Net zero implies no change.