With a turbulent picture emerging both at home and abroad, it is perhaps inevitable that the merchant sector expressed some unease in the latest instalment of The Pulse, as seen in the May edition of PBM. However, grounds for optimism remains…

After a sharp rise in February, merchants’ sales expectations and confidence in the market had only one way to go, and it dipped in March — but only to the still high levels of preceding months. Compared to the same month in 2021, merchants’ confidence in the prospects for their own business fell steeply too.

Supply problems continued to affect merchants generally, but there were signs that things were improving. Many merchants had also become “better organised and prepared”, so they were less affected by shortages and delays.

The Pulse, by MRA Research, is a monthly tracking survey of merchants’ confidence and prospects. Telephone interviewing took place between 1st and 3rd March 2022.

Merchants’ supply problems eased in March. The average score (3.71) was the lowest since we started to measure supply problems a year ago — Chart 1. Being more prepared and thinking ahead were cited along with a return to some normality. 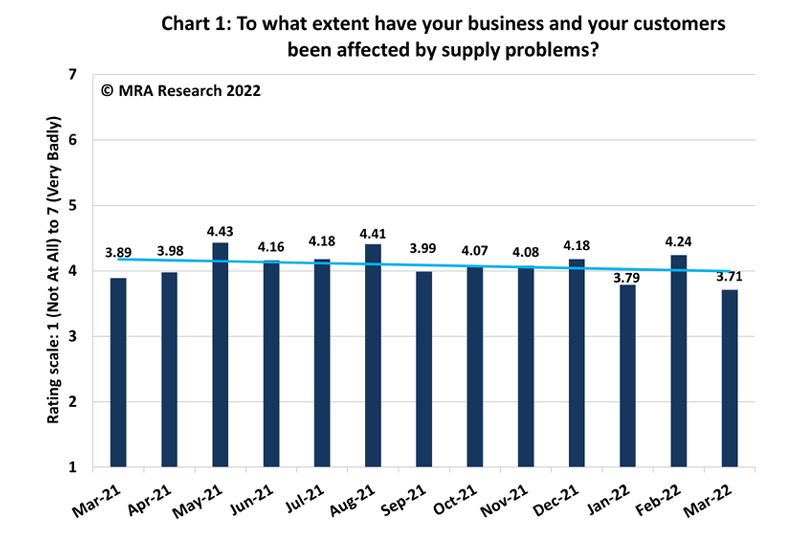 Year-on-year, sales expectations in March dipped (net +33%), compared to the same month in 2021, and were in line with recent months following February’s sharp rise — also Chart 2. Expectations were strongest among Large outlets (net +63%) and National merchants (+54%). Expectations were weakest among branches in the Midlands. 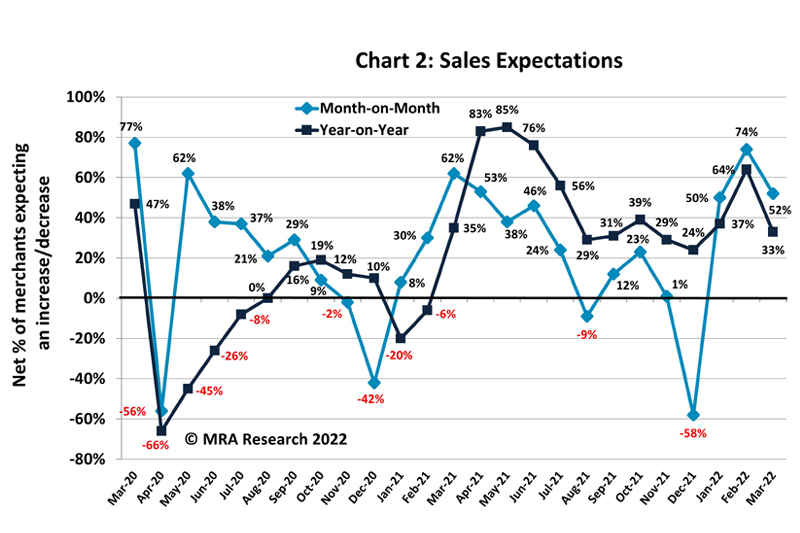 Merchants expected a strong quarter ahead, with a net +54% expecting March-May sales to increase compared to the previous three months (December to February) — Chart 3. Expectations were strongest amongst Independents (+70%), Scotland (+64%), Large outlets (+63%), Mid-sized outlets (+62%) and the South (+61%). 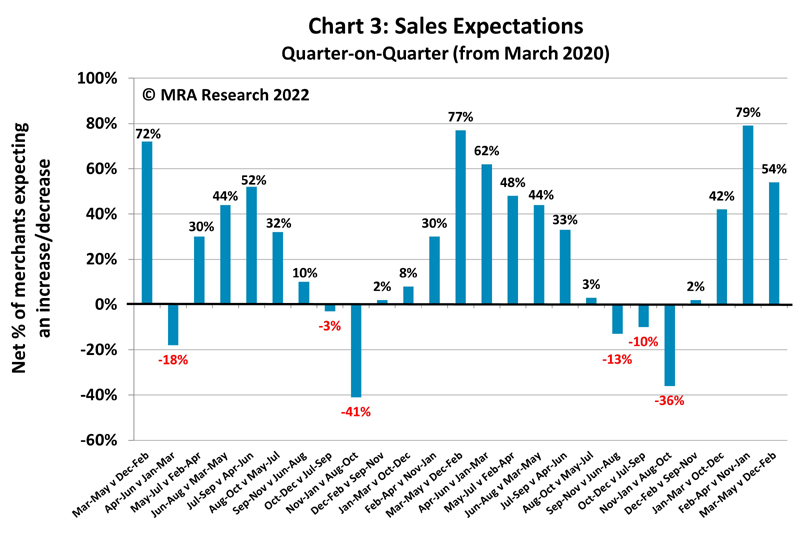 Three in ten merchants expecting sales to grow over the next three months, expected them to increase by up to 9% — Chart 4. A further 45% expected sales to grow by 10-20%, and 17% expected even stronger growth. 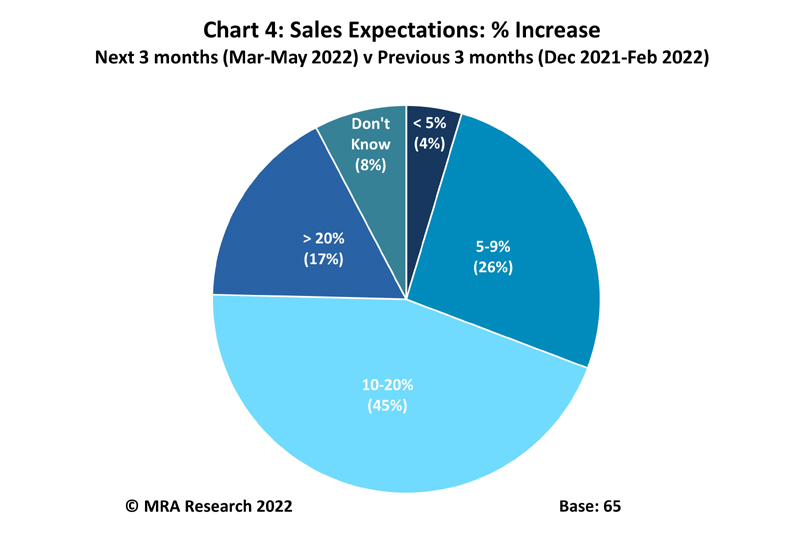 A net 47% of merchants expect sales to grow in the six months, March-August, compared to the previous six months (September 2021-February 2022). Merchants in the North and Independents (both net +57%) had the strongest expectations. Expectations were lower among branches in the Midlands (+36%).

Confidence dropped markedly in March (net +6%) compared with February. Merchants in the Midlands (net -16%), Scotland (-14%) and Independents (-13%) were least confident.

Confidence also weakened considerably, year-on-year, with a net +27% of merchants more confident in March than the same month in 2021 — Chart 5. Merchants in the South (+45%) and Large outlets (+42%) were most confident. Branches in the North and Independents (both +13%) were least confident in the market.

In March, merchants’ confidence in their own business returned to the still high levels of January after February’s strong surge (net +46%). Confidence was strongest among merchants in the North (net +65%) and in Large branches (+63%), and noticeably weaker in Scotland (+14%).

After several months of steady growth, merchants’ confidence in their own business fell away quite steeply compared to the same month in 2021, but from a very high level to a still high level (net +40%) — also Chart 5. Merchants in the South and in Scotland (both net +50%) were most confident. Branches in the Midlands were less so (+16%). 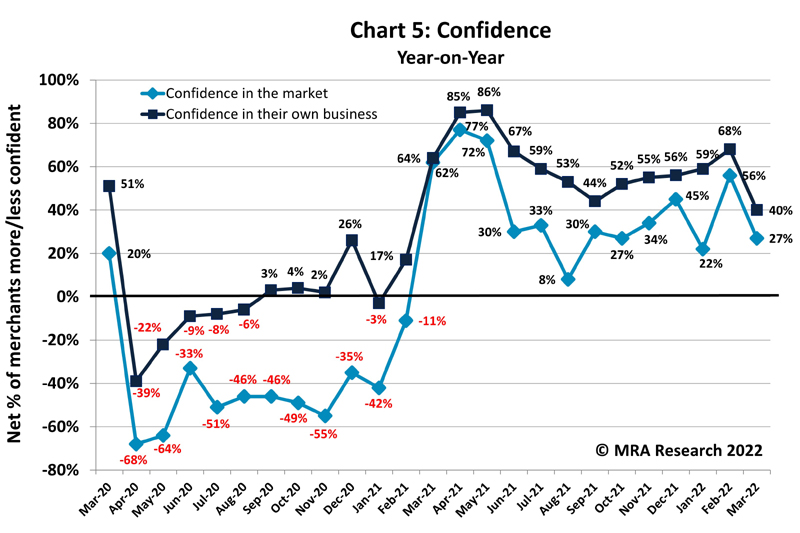 This report is the 35th in the series, with interviews conducted by MRA Research between 1st and 3rd March 2022. Each month a representative sample of 100 merchants is interviewed. The sample is balanced by region, size and type of merchant, including nationals, regional multi-branch independents, and smaller independent merchants.

0 0 0 0
Previous : Postal service
Next : Staying out for the summer