The Independent Builders Merchant Group (IBMG) has announced the acquisition of Merkko Builders Merchant, expanding its offering into Oxfordshire and Berkshire, and following on from the recent news that it has continued to increase its network of electrical wholesaler outlets.

Merkko is described as a highly successful independent builders’ merchant supplying trade and retail customers across Oxfordshire and Berkshire. Headquartered in Abingdon, it operates from two branches in Kingston Bagpuize and Aldermaston, both stocking a comprehensive range of construction materials for building and civil engineering projects.

The firm is reported to have demonstrated strong organic growth since its formation and the new partnership “resolves future succession planning” for the company. Merkko will join IBMG’s Grant & Stone brand and owner Ian Duckitt will continue with the business, working with Grant & Stone MD Mat Miller to ensure its successful integration into the Group.

Mat Miller said, “We are delighted to welcome Merkko Builders Merchants to the Group, allowing us to now offer customers in-depth knowledge and expertise for any civils projects. We have much in common, so this is a strong and logical partnership. This acquisition further strengthens IBMG’s position as the largest independent merchant in the South of England.”

Ian Duckitt, Managing Director of Merkko Builders Merchants said, “I am confident that this acquisition will provide an excellent home for both our customers and our people who will thrive within a highly respected, independent builders merchant focused on excellent customer service. I look forward to working with Mat to ensure our successful integration into the Group.”

IBMG has also continued to expand its electrical wholesale division with four branches opening in four weeks, the latest being a new Grant & Stone electrical wholesaler located on a 4500ft site in Hobley drive, Swindon. The Swindon branch increases the division’s geographic reach and forms part of a large expansion plan designed specifically to complete gaps in its branch network, with further branch openings planned in the coming weeks.

Darren House, MD of the Group’s electrical division, said: “Grant & Stone Swindon further enhances our presence from Enfield through to Paignton and is our fourth new electrical wholesaler in four weeks. We have a team of five experienced specialists, led by a great local manager, Ollie Leivers, who has over 20 years’ experience in the industry. As a group, we continue to remain fiercely independent in our approach, outlook and dealings with customers, which is the reason for our continued success.”

The Swindon branch follows other branch openings including in Brentwood and Acton, and increases the network of IBMG’s specialist electrical wholesale depots to 25 across the South of England. 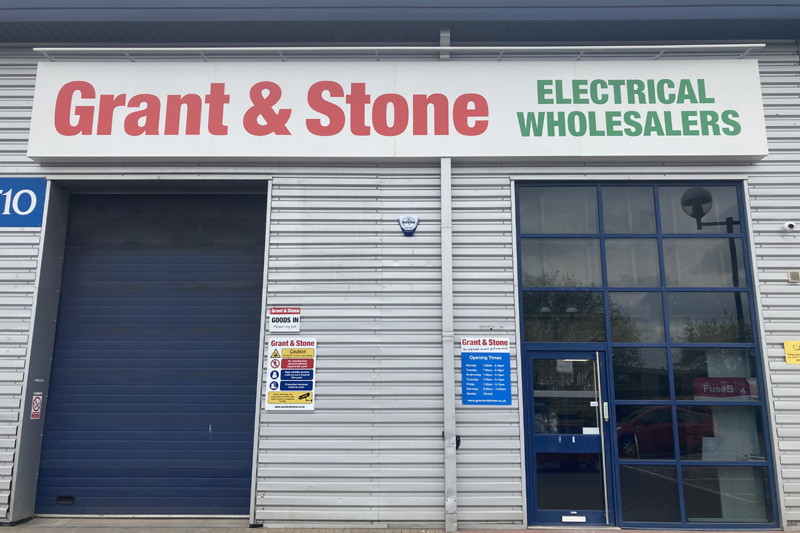