Ten-25 Software celebrated 40 years of trading in 2021. PBM delves into the story of the firm’s development and hears more about its plans for the future.

1981 featured plenty of notable events, from the first London marathon to the Royal Wedding of Charles and Diana. It was also the year IBM launched its personal computer, and whilst the internet and cloud technology would have to wait well over a decade to enter our lives, this marked an important milestone for technology.

It was also the year that Ten-25 Software was officially founded in Dorset, by husband-and-wife team Baird and Sue Oldrey, soon joined by Norman Symcox. Developed from the Sherry & Haycock System Ten computer, and later run on a System 25 computer, Ten-25 worked exclusively with timber and builders’ merchants in the early days using the inaugural STRIP system, continuing the work Baird had been involved with since 1974.

In true start-up fashion, the company originally operated from the Oldreys’ home, but quickly expanded into offices in nearby Ferndown. The early STRIP system subsequently gave way to new iterations of software as technology advanced, and the Oldreys’ son Ian joined the business, working initially on marketing before moving into product development and eventually taking over as Managing Director.

For 40 years, Ten-25 states it has continued pioneering new technologies with a consistent goal — to help merchants build better business more easily. The capabilities of the systems continue to evolve as technology facilities enhanced functionality. As co-founder Sue Oldrey reminisces, “Even back in 1974 I remember wondering when the system would be finished — and of course, it never is!”

Merchanter, Ten-25’s cloud-based ERP system launched in 2020, is rapidly rolling out to a widening range of merchants and the company itself is experiencing significant growth, adding several new members to the team over the course of 2021 to meet rising demand for the software. 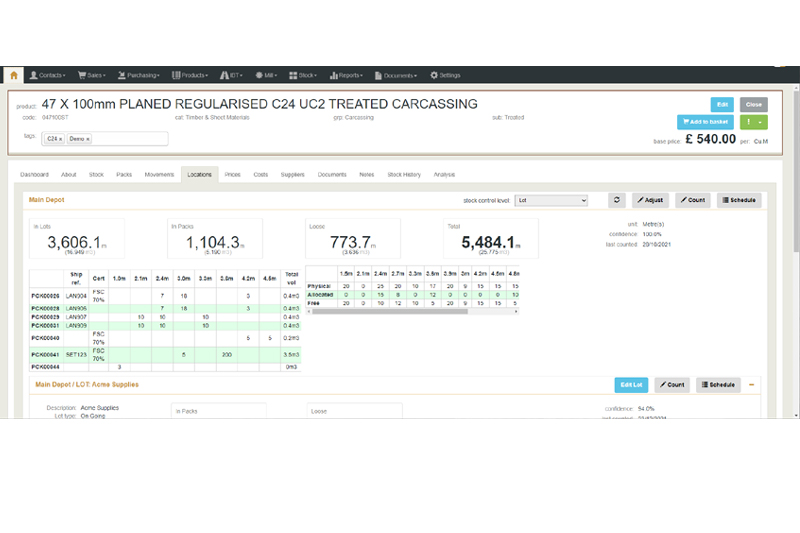 “The best benchmark we have of success is the longevity of our customer relationships,” explains Ian. “Some of our customers have been with us right from the beginning, when they’d have meetings under the apple trees in my parents’ garden.

“With so many great software products in the market, it’s not a lack of other options keeping them with us. We are proud of these longstanding relationships and hope to keep working with such valued partners for many years to come. It’s easy to say ‘we’re customer-focused’ but genuinely, Merchanter has been built on the foundations our customers asked us for, and we’re investing in new staff purely focused on supporting customers every day.”

Ten-25 has welcomed a broad cross-section of merchant and supplier businesses in recent years. As well as timber and builders’ merchants, the software is also popular among steel stockholders, plumbing and heating merchants, stone and aggregates suppliers, agricultural merchants and many more.

“The beauty of the system is its ease of use,” says Ian. “We’ve invested a lot of time and resource into making every process and function simple and intuitive. We even brought in a games designer to improve the usability and make it as much fun as possible. We’re really proud of how flexible and versatile it is, so it’s great to see new sectors embracing that simplicity.”

In fact, Ten-25 is so confident the system is easy to use, it offers 30 days’ free access to an online demo system to enable prospective customers to really get to know it up front.

Ian continues: “Of course, we do offer guided demos too but we want people to discover the system for themselves without feeling pressured. People expect technology to be easy, intuitive and helpful — they don’t want to spend months learning how to process an order or run a stock check. A system as powerful and complex as this may never be ‘plug-and-play’ like consumer tech, but we’re getting a lot closer to it.”

Solutions for a changing market

It’s not just technology that’s changing fast. Trading conditions have changed almost beyond recognition over the last 40 years as well, and those changes have accelerated exponentially over the last two years, driven by the pandemic, and compounded by Brexit and sustainability targets.

“Merchants’ customers have different expectations now,” says Ian. “There’s a generation of digital natives coming through; people who regard the internet as a basic necessity, not a luxury. Digital transformation needs to be a major priority for merchants, and that goes way beyond a website or eCommerce platform.”

“The beauty of the system is its ease of use. We’ve invested a lot of time and resource into making every process and function simple and intuitive. We even brought in a games designer to improve the usability and make it as much fun as possible. We’re really proud of how flexible and versatile it is, so it’s great to see new sectors embracing that simplicity.”

There is a wealth of technology opportunity at hand for merchants to help both on- and offline. From merchandising software to online marketplace services like NearSt., the products and services available are evolving fast.

“It’s unrealistic to think one piece of software or one system can answer every need a merchant has,” adds Ian. “Integration is therefore really important, and we’ve invested a lot to make Merchanter as interoperable as possible. Basically that means it can link up really easily with other best-in-class platforms — eCommerce, financials, PIMs and so on — to give merchants the best mix of tools for their particular needs, with a really powerful engine of up to date information under the hood.”

“2022 and beyond is looking very exciting for us,” reveals Ian. “The team is expanding fast and we’ve got some really exciting new products in the pipeline which we’ll be unveiling over the next few months.

“We’re looking at what emerging — and existing — businesses both want and need, and creating the products to meet those requirements. There are lots of smaller, simpler businesses starting up which don’t necessarily need all the bells and whistles of the full system, but which would benefit from more than just an off-the-shelf product. There’s also opportunity for standalone, app-style modules for certain areas of the business.”

Ian concluded: “It’s fair to say that the world has changed a lot in the last 40 years, and will no doubt continue to evolve. We want to provide the right tools to help merchants flex and adapt to the changing market and customer expectations, whatever those might look like in the coming years.”

Click here for more information on Ten-25 and its software solutions for merchants.

A version of this article first appeared in PBM’s March edition. Click here to read the full digital issue.