As featured in the May edition of PBM, the latest installment of The Pulse outlined how the ‘Covid roadmap’ and seasonal trends were boosting the confidence of the nation’s merchant businesses.

The Pulse, by MRA Research, is a monthly tracking survey of merchants’ confidence and prospects. Telephone interviewing took place between 2nd and 5th March 2021. This survey highlights the remarkable recovery of the sector since March last year, with merchants’ outlook notably strong for the next three months (March to May) and the next six months (March to August).

And whilst the sector’s views in March were boosted by the Prime Minister’s announcement of a roadmap out of lockdown, increased sales activity and seasonal expectations sent merchants’ confidence in their own business and in the market significantly higher.

Ninety-seven per cent of merchants said all or most of their suppliers were currently able to supply them — see Chart 1. But there were differences by size, region and type of merchant. 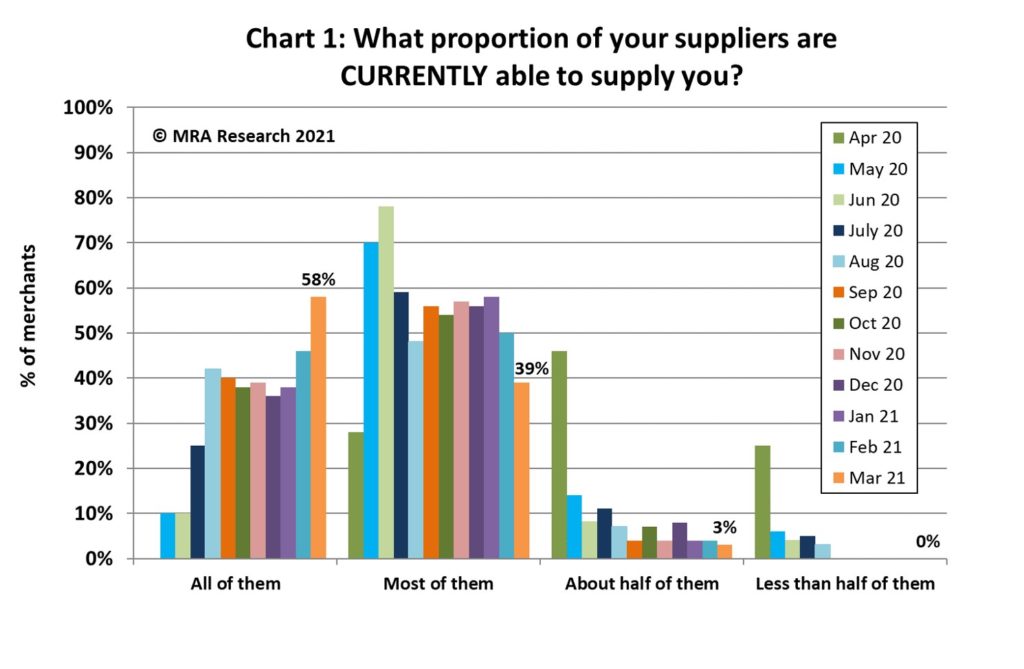 Sales expectations for March compared to February were strong (net +62%), with continual improvement since December — see Chart 2. Expectations were almost at the same level as last March before the first lockdown (+77%), and strongest among mid-sized merchant outlets (+75%), those in the South (+74%) and Regional branches (+71%).

Of the merchants anticipating an increase, a third expected March’s sales to improve by up to 10% compared to February. Just over four in ten expected sales to be up by 10-20%.

Year-on-year, merchants’ sales expectations improved markedly with a net +35% of merchants forecasting an improvement in March compared to -6% in February’s survey — also Chart 2. The outlook for merchants in the Midlands and the North (net +50% and +46% respectively), and mid-sized and large branches (+45% and +44%) was even stronger.

A third of merchants forecasting stronger year-on year sales expected sales to increase by up to 10%. Two thirds expected to sell 10-20% or more. 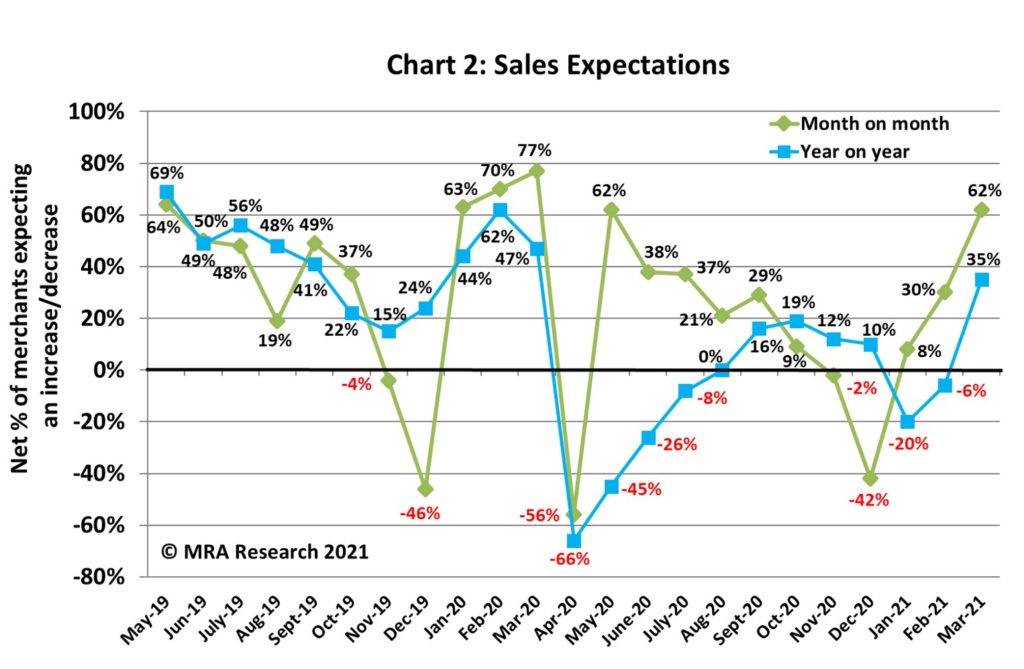 Sales expectations for the three months ahead (March to May) improved to the highest level since the survey began (net +77%). More merchants in the North (net +86%) expect higher sales than those in Scotland (+63%). Regional branches (+83%) are more bullish than Nationals (+70%).

Of those forecasting higher quarter-on-quarter sales, one in three expected sales to increase by up to 10% — see Chart 3. However, almost two thirds of those expecting to sell more, anticipate growth of 10% or more. 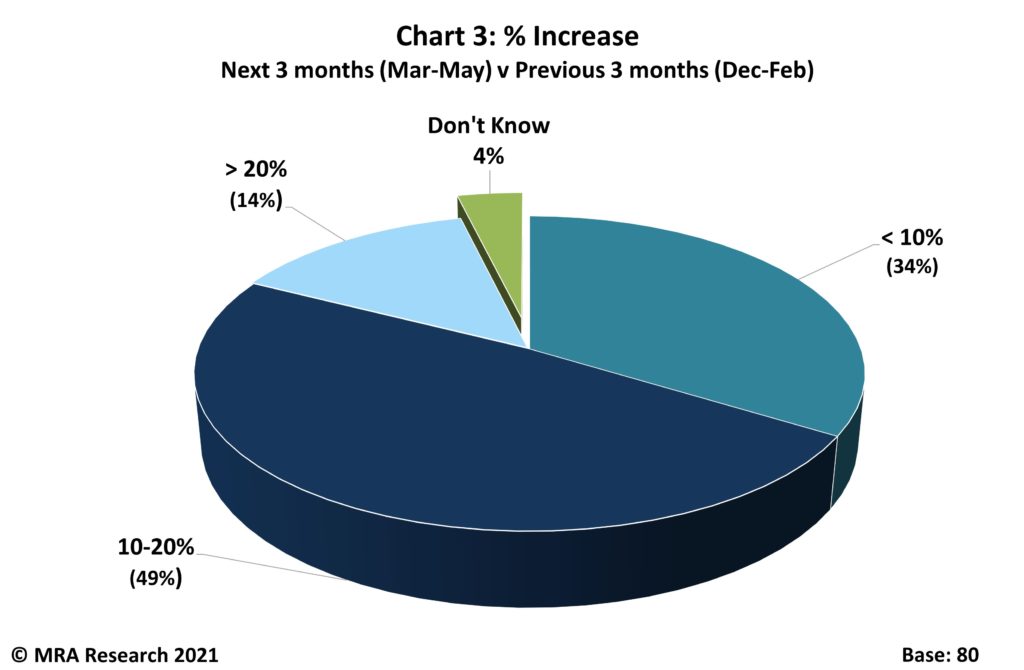 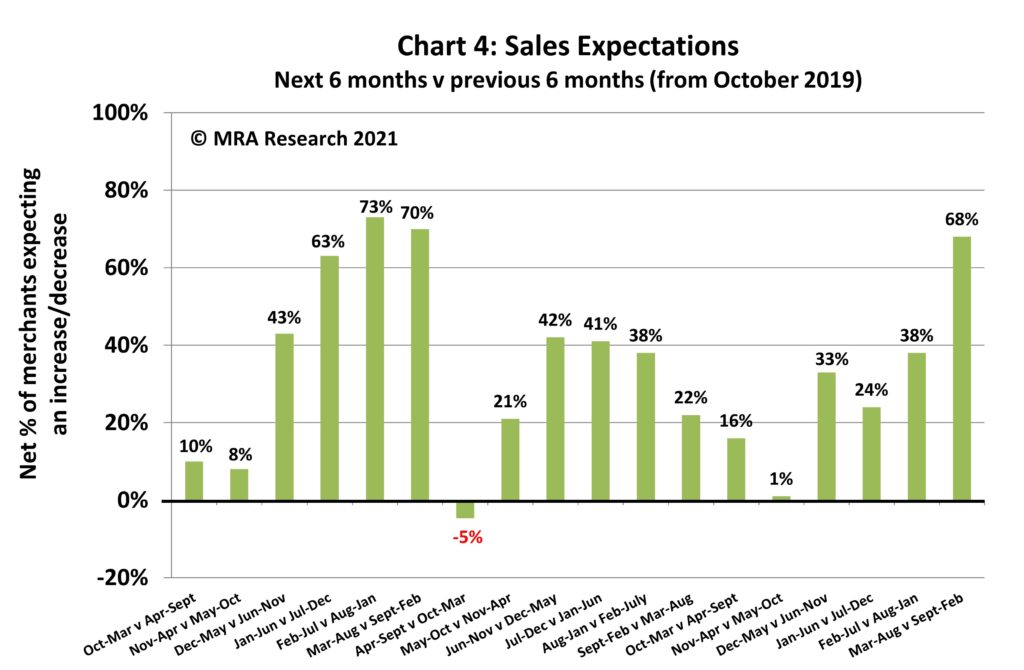 Confidence in the market continued to improve compared to February (net +42%). Merchants in the South (+63%) were most upbeat. Independent outlets and those in the North (both +23%) and Scotland (+25%) were more cautious.

Year-on-year confidence rose significantly and to the highest level since this survey began (net +62%). Confidence was well ahead of last March’s pre-Covid levels — Chart 5. Merchants in the South were more confident (+71%) than those in the North (+46%). Similarly, Regional branches and Nationals (+68%) were more confident than Independents (+41%).

Merchants’ confidence in the prospects for their own business continued to strengthen in March compared to February (net +60%). Merchants in the South (+71%) were more confident than those in the North (+50%).

Merchants’ confidence in their own business increased significantly in March compared to the same month last year (net +64%) — also Chart 5. Regional branches (+81%) were most confident. 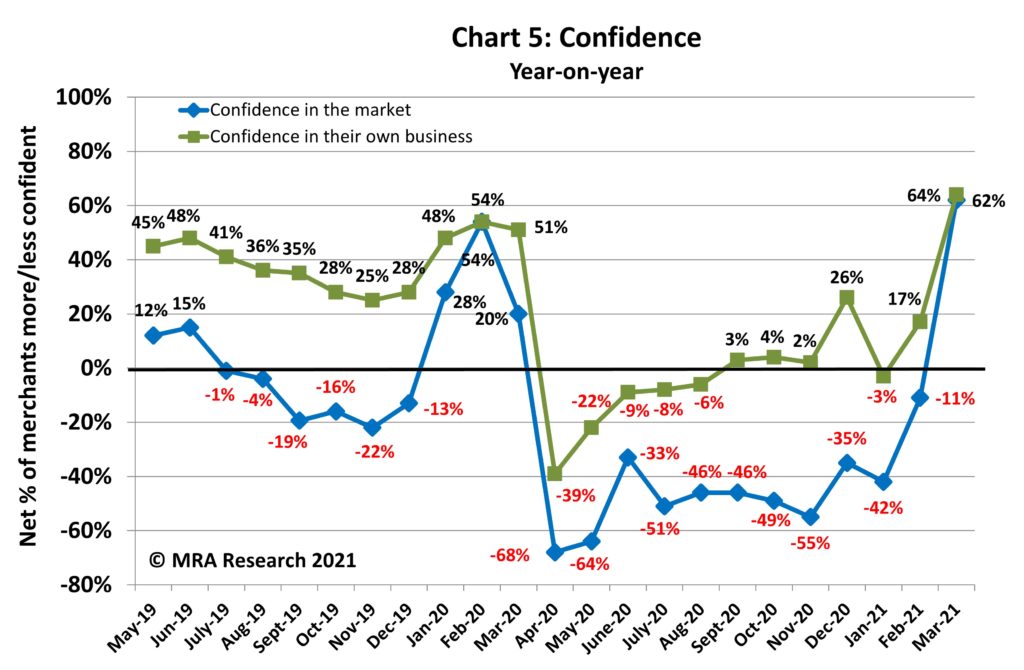 This report is the 23rd in the series, with interviews conducted by MRA Research between 1st and 5th March 2021. Each month a representative sample of 100 merchants is interviewed. The sample is balanced by region, size and type of merchant, including nationals, regional multi-branch independents, and smaller independent merchants.