November marked the launch of a new depot for East Anglian builders’ merchant, Collier & Catchpole – an exciting new development for the company in its 200-year history.

Based on the Riverside Industrial Estate in Lawford, Essex, the new location comes in addition to the Colchester and Ipswich depots, which the merchant says have both maintained a long-standing quality reputation locally over many decades and continue to thrive.

After opening its doors on 4 November, the new Lawford depot was officially opened by Mrs Jane Collier (main picture) with a ribbon cutting ceremony on Friday, 15 November. Alongside colleagues, suppliers and customers, the event was attended by the Mayor of Manningtree, Ruth Stocks, and Lawford councillors, Dave Thurlow and Godfrey Payne.

During her launch speech, Mrs Collier paid tribute to the hard work of her late husband, Roy Collier, who was responsible for the family-run business until his death in 1998. Colchester born and bred, in 1955 Roy joined his father Samuel in the local family business, Collier (Stanway) Limited – a gravel, lime and cement merchant.

He continued to work for the business following acquisitions by St Ives Sand and Gravel, and then Goldfields. During this time, the family continued to own the land and office building that this business was situated upon. However, when the lease came up for renewal in 1975, Roy decided not to renew and set up a builders’ merchant operating from the site.

In anticipation of this, Roy purchased E Catchpole & Sons, an Ipswich-based builders’ merchant and the two businesses traded separately until 1988, when they were amalgamated under the Collier & Catchpole name. The company is now managed by Tim Rowbottom, who maintains the family ties as Roy’s son- in-law.

The launch of the new location is another step in the expansion and growth of the successful, independent family-run business, with the latest depot providing a variety of job opportunities for local residents, as well as a new trusted destination for the local trades.

The depot stocks items from leading brands across a variety of product categories, including timber, insulation, bricks and blocks, drainage, paint, patio, driveway and other landscaping materials, such as porcelain and natural stone. Customers will be able to collect stock from the yard and enjoy a comprehensive delivery service. 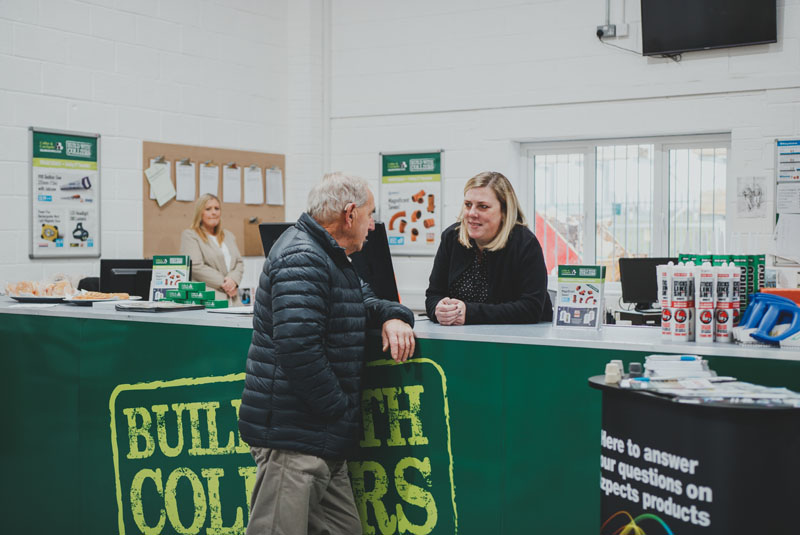 Images © We Are Aphra / Chelsea Robinson