The latest edition of The Pulse revealed a level of cautious positivity from the survey’s merchants as they waited to establish the implications for their business and the market in light of the then-looming Covid-19 threat.

Between the time of interviewing (beginning of March) and the time of writing (end of March), the builders’ merchants’ world has been turned upside down as the Government introduced a series of measures to contain the Coronavirus pandemic.

The new measures, and their daily reveal, created a lot of confusion in the last two weeks of March for suppliers and contractors. National merchants closed temporarily to seek clarity from the Government, while other merchants variously stayed open awaiting developments, shut down, or partially closed to provide a skeleton service.

Few could foresee the extent of these measures or their knock-on effects, however it remains important to present these findings as a benchmark for future surveys.

A net +77% of merchants expected sales to increase in March compared to February — see Chart 1. Few expected sales to drop over the period. Expectations were strongest among mid-sized branches (net +92%), although small and large outlets were also positive (+68%).

Regionally, merchants in the South, North and Scotland (net +81%) were particularly upbeat with none of those interviewed expecting a fall. This compared to a net +65% of merchants in the Midlands.

Year-on-Year, a net +47% of merchants expected better sales in March compared to March 2019, although expectations for sales growth weakened compared to the last survey (Chart 1). Merchants in the North (+71%) were most positive. 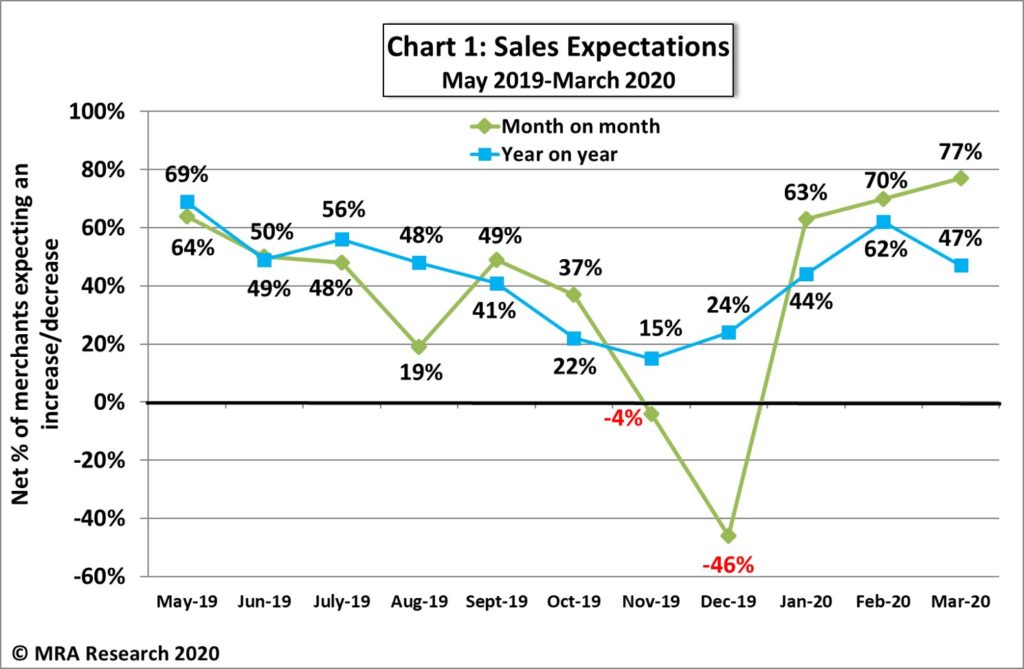 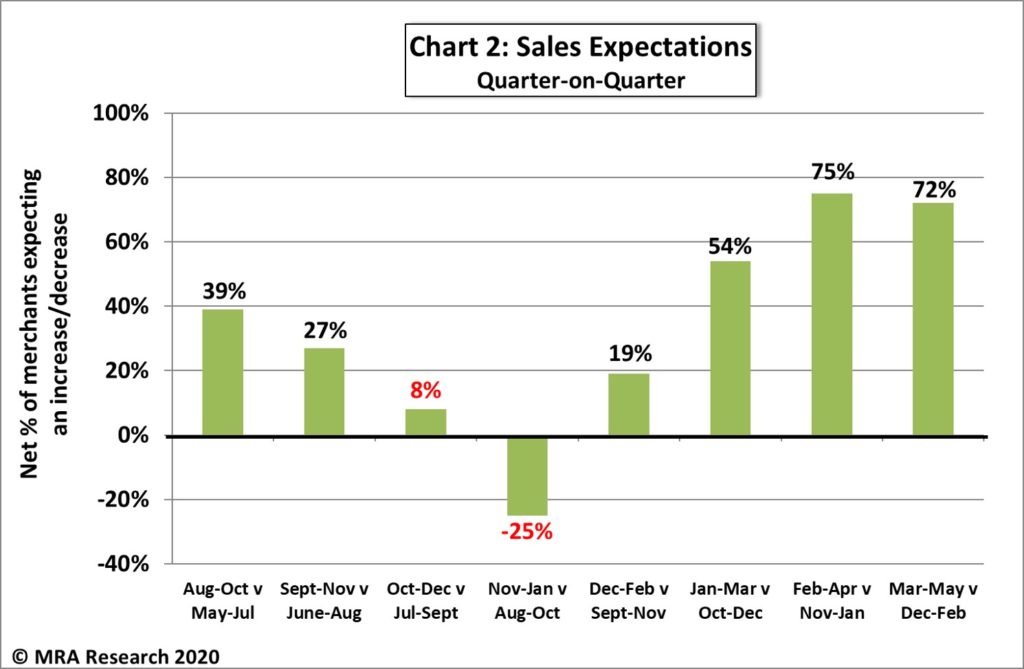 Prospects for the next six months were also seen as robust, with a net +70% of merchants anticipating better sales in March to August 2020 compared to the previous six months (September 2019 to February 2020). See Chart 3. Expectations for the period were strong across the board. 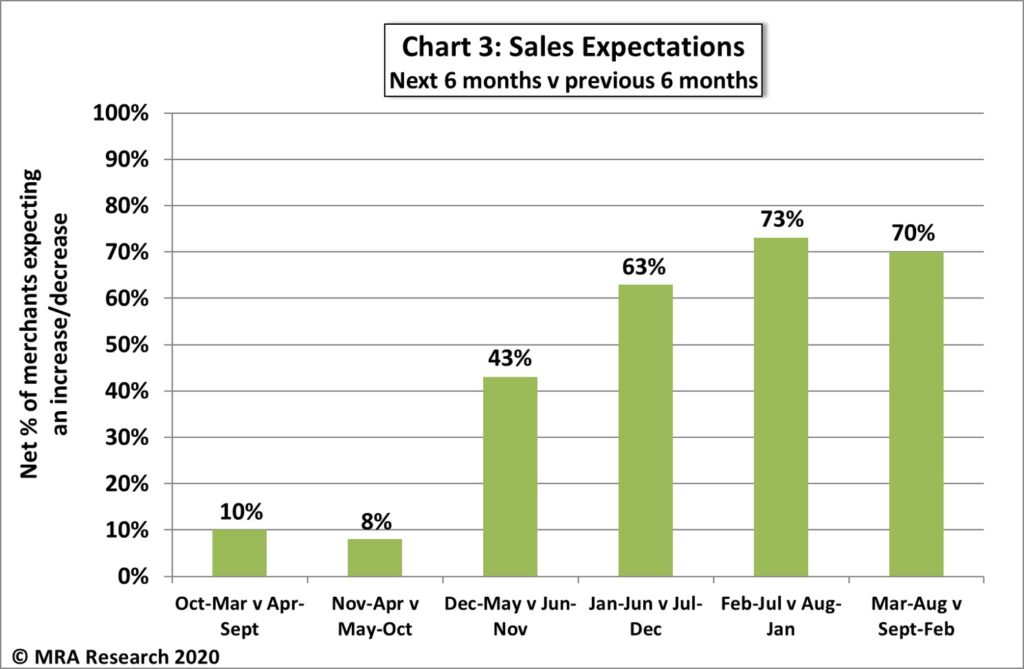 A net +23% of merchants were more confident about the market in March compared to February. Those in the South (net +53%) and regional merchants (+40%) were most confident. In contrast, a net -8% of merchants in Scotland were less confident.

Year-on-year, confidence dipped since the last survey with a net +20% of merchants more confident about the market in March compared to the same period last year, dropping from +54%. See Chart 4.

Brexit being ‘done’ was still among the main reasons for merchants’ improved confidence. However, uncertainty generated by the Coronavirus was starting to weigh on people’s minds.

Merchants’ confidence in their own business remained strong, with a net +61% more confident in March than in February. Nationals (net +64%) and regional merchants (+69%), were more confident than independents (+37%).

Year-on-year, a net 51% of merchants were more confident. Independents (+21%) were less confident than others. See Chart 4. 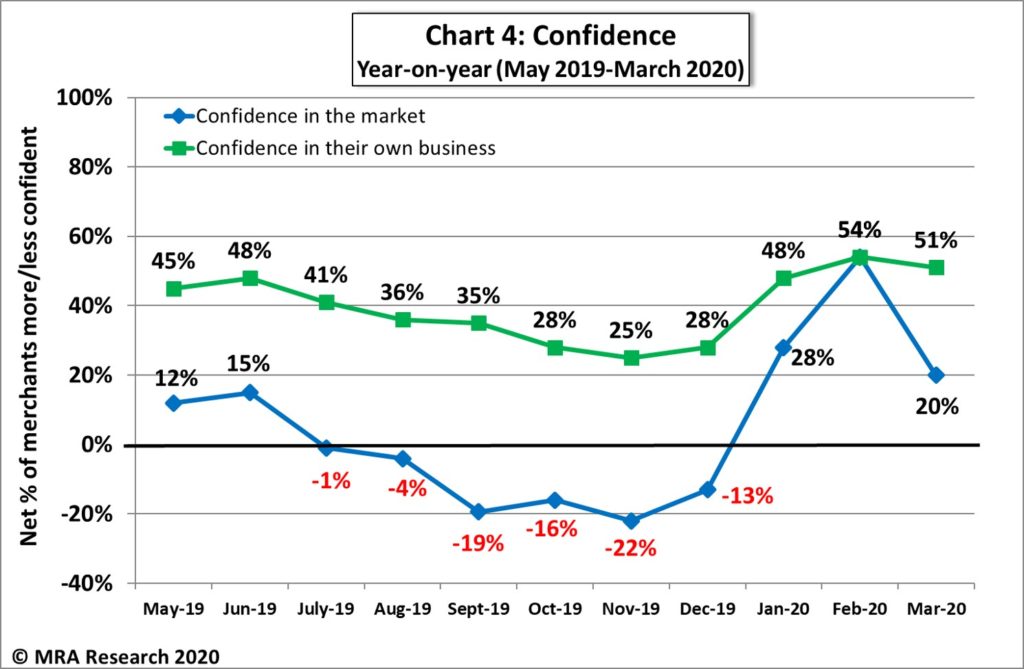 This report is from the 11th survey in the series, with interviews conducted by MRA Research between 2nd and 4th March 2020. Each month a representative sample of 100 merchants is interviewed, balanced by region, size and type of merchant, including nationals, regional multi-branch independents, and smaller independent merchants.

The full report can be downloaded free from www.mra-research.co.uk/the-pulse or call Lucia Di Stazio at MRA Research on 01453 521621.