Despite the country going into varying forms of lockdown again, merchants still expected to sell more in January 2021 than in December 2020.

Telephone interviewing took place between 5th and 7th January 2021 for the latest instalment of The Pulse — a monthly tracking survey of merchants’ confidence and prospects compiled from PBM by MRA Research, with this report published in PBM’s March issue.

In addition to an expectation of selling more in January than in December, merchants also forecast selling more in the next three months (January to March 2021) compared with the previous three months (October to December 2020). And they expect better sales in the next six months (January to June 2021) compared to the previous six months (July to December 2020).

Ninety-six percent of merchants say most or all their suppliers are currently able to supply them. However, stock availability and extended lead times remain key issues. 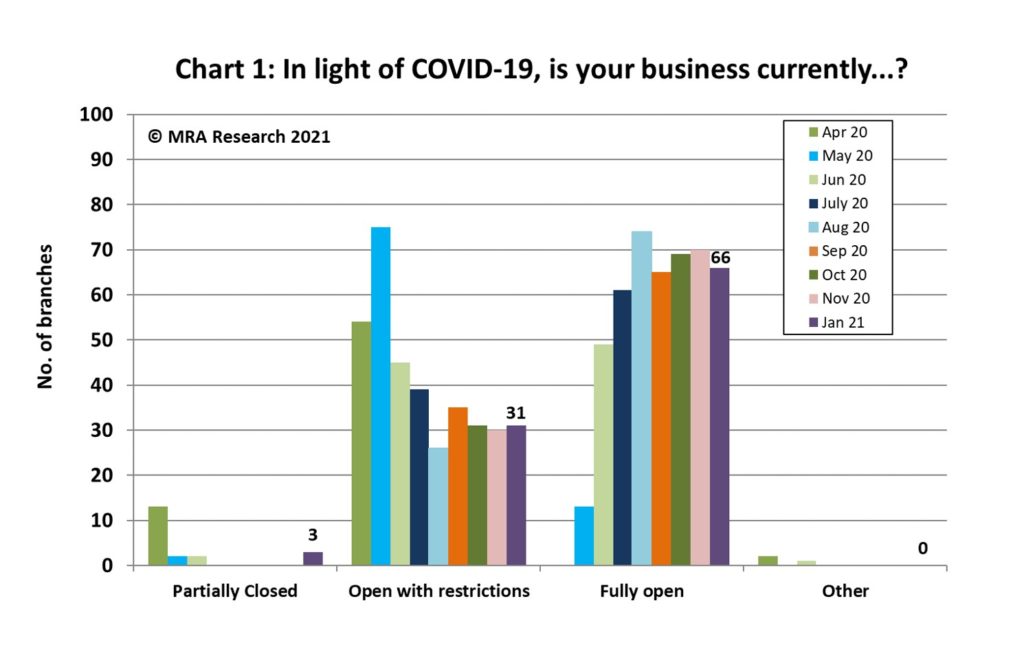 With more trading days in January, sales expectations strengthened sharply compared to December with a net +8% of merchants forecasting a rise in sales (Chart 2). All regions except Scotland (net -7%) expected to sell more. Of those forecasting growth, 8 in 10 merchants expected January’s sales to be as much as 20% up on December volumes.

Compared to January 2020, merchants’ sales expectations dropped sharply with a net -20% forecasting a decline in January 2021 (Chart 2). Expectations were weakest among small merchants (net -39%) and those in the South (-26%). Of those anticipating lower year-on-year sales, 7 in 10 expected sales to fall by up to 20%. 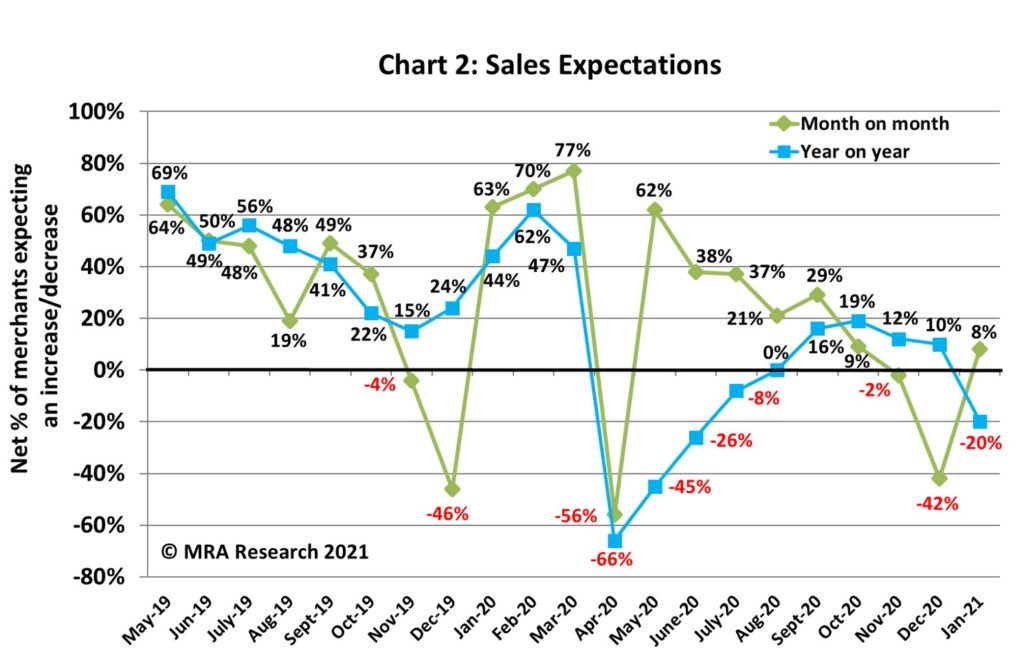 The sales outlook for the next three months (January to March 2021) improved, with a net +8% forecasting better sales over the period compared to the previous three months of October to December 2020 (Chart 3). Merchants in the North (net +23%) and Scotland (+27%) expect to sell more, but those in the Midlands (-16%) forecast lower sales. 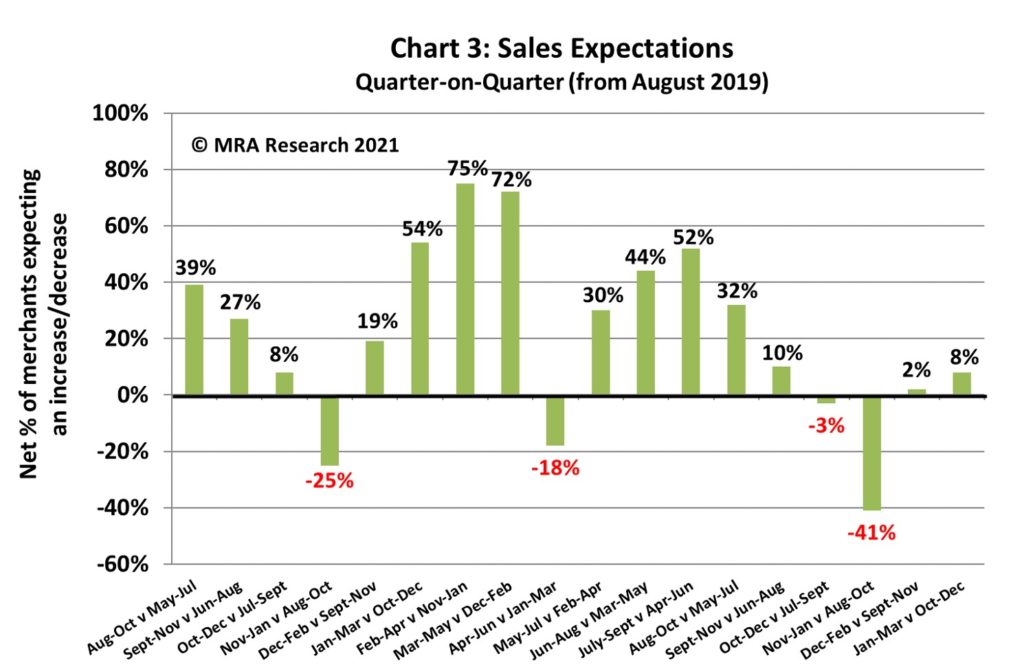 Merchants’ sales expectations for the next six months stay strong. A net +24% forecast an increase in January to June 2021 compared to the previous six months. Medium-sized outlets (net +36%) and Nationals (+32%) are most positive.

Of those predicting an increase in sales, three quarters expect growth of up to 20%. One in ten forecast even stronger growth (Chart 4). 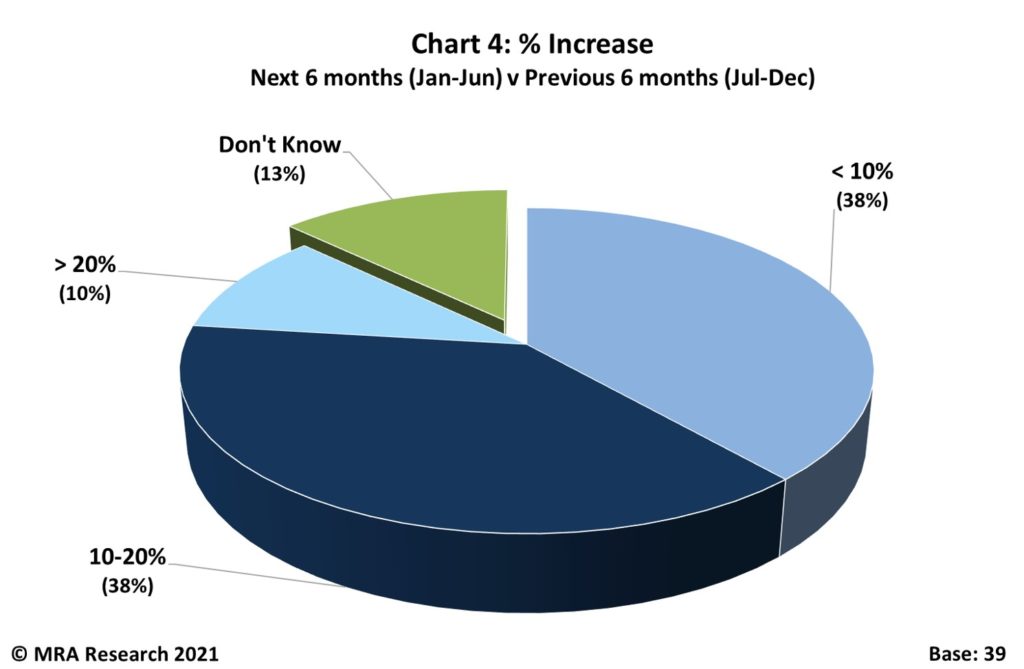 Whilst merchants have been consistently more confident in the prospects for their own business than they have in the market, their confidence has weakened over the last seven months. A net +19% of merchants were more confident in January compared to December. This is a sharp drop from the previous month’s survey (+42%).

Having strengthened steadily since last April and lifted strongly in December, merchants’ confidence in their own business fell sharply in January 2021 compared to January 2020 at net -3% (Chart 5). 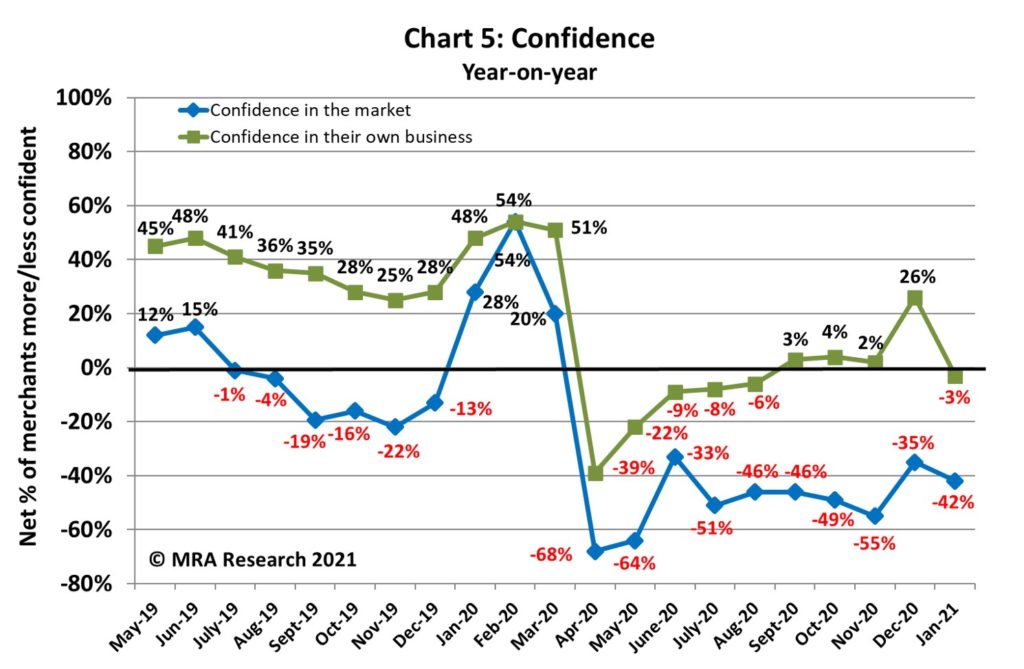