With the survey of participating merchants for The Pulse this month taking place in late April, the impact of COVID-19 had truly begun to bite. In an extended feature from PBM’s June issue, we look at the consequences for merchant sales and confidence.

The government’s announcement on 23rd March to close all non-essential businesses to contain the Coronavirus put Britain into lockdown overnight. Following much confusion as to what this meant for the construction supply chain, clarification was ultimately offered and many merchants were able to maintain a level of trading.

For this month’s feature, interviewing took place between the 20th and 28th of April. At the point of research, many merchants had reopened with restrictions — including limited or no access to the trade counter, reduced staff and opening hours, click & collect service only, or pre-booked collections and deliveries only  — while others remained fully closed.

Because of the unusual circumstances, as well as the regular enquiries on sales expectations and confidence, additional questions were asked to get a better picture of the market and trends through the lockdown.

Responses from merchants on both the effect of running partially closed branches and intentions to (more) fully reopen included:

“At the start of the lockdown it was okay. As we go further in, customers are getting more demanding.”

“Those that collect seem happy enough.”

“We’re currently trialling opening a few branches for a few hours with specific PPE. If this works, we may move to opening more branches for customers to come into the store.”

“Over the next couple of weeks, we’re hoping to open full hours and have measures in place so customers can enter the branch.”

Asked what proportion of their suppliers are currently able to supply them, 28% said most of them – 46% said about half — see Chart 1.

“Sector specific, especially plaster. This is very hard to get hold of.” 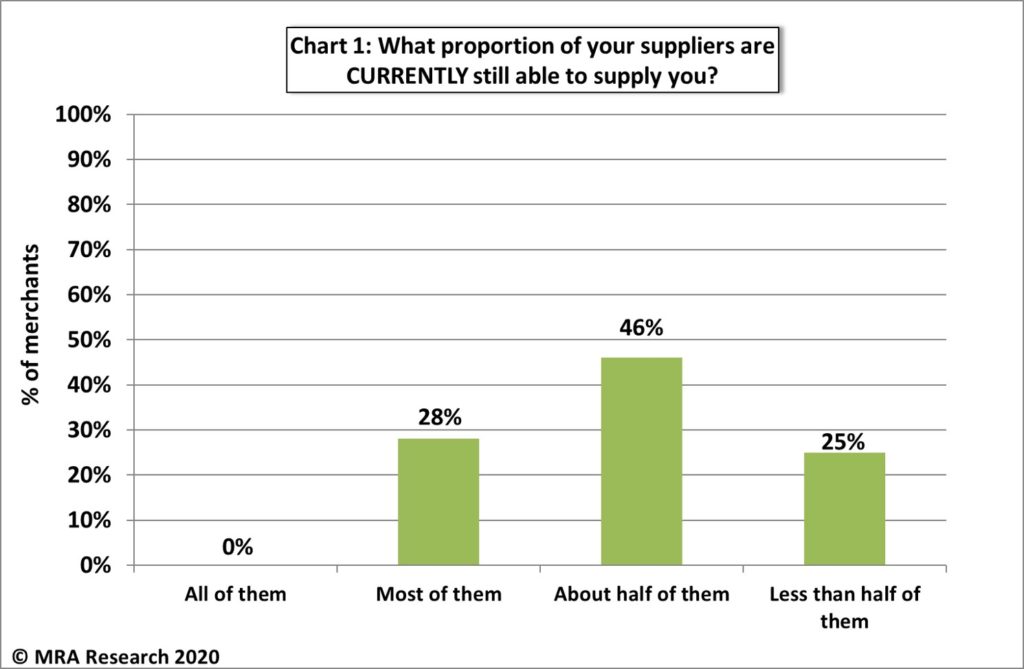 A net -56% of merchants, interviewed towards the end of April, expected April sales to be down on March. This is a sharp fall from the previous survey — see Chart 2. Small branches (net -72%), merchants in the Midlands (-80%) and nationals (-77%) were particularly affected.

A net -66% of merchants anticipated a decrease compared to the same period last year. Expectations were weakest among small branches (net -79%), merchants in the South and nationals (-85%). 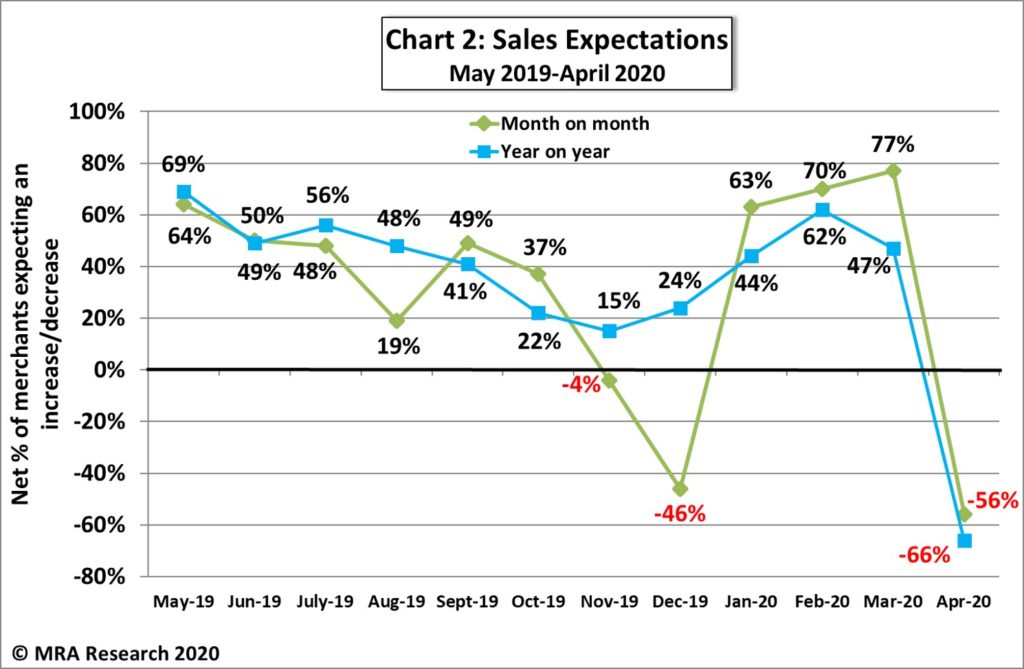 Among merchants expecting lower sales compared to April last year, a quarter couldn’t estimate what it would be. Just over a third (36%) expect a decrease of 50-75% and 21% expected it to be more than 75%. See Chart 3. 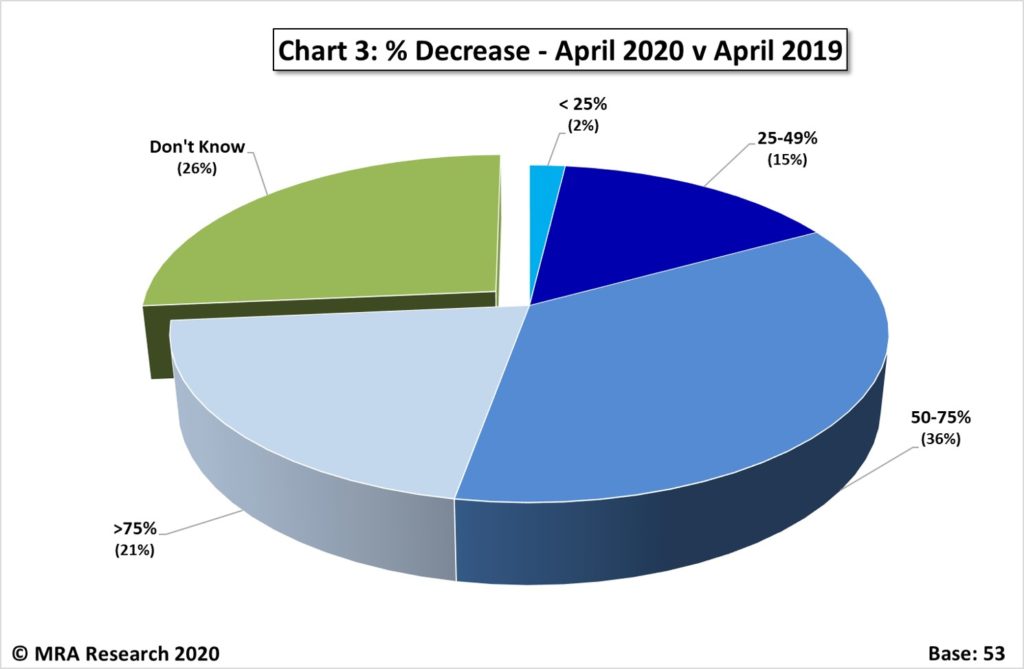 Looking to the next three months (April to June), a net -18% of merchants forecast lower sales compared with the previous three months (January to March). See Chart 4. Merchants in the North (net +36%) were the only ones to forecast a quick recovery and increase over this period.

Of those anticipating a drop compared to the previous three months, most (37%) expect sales to be down 50-75%. 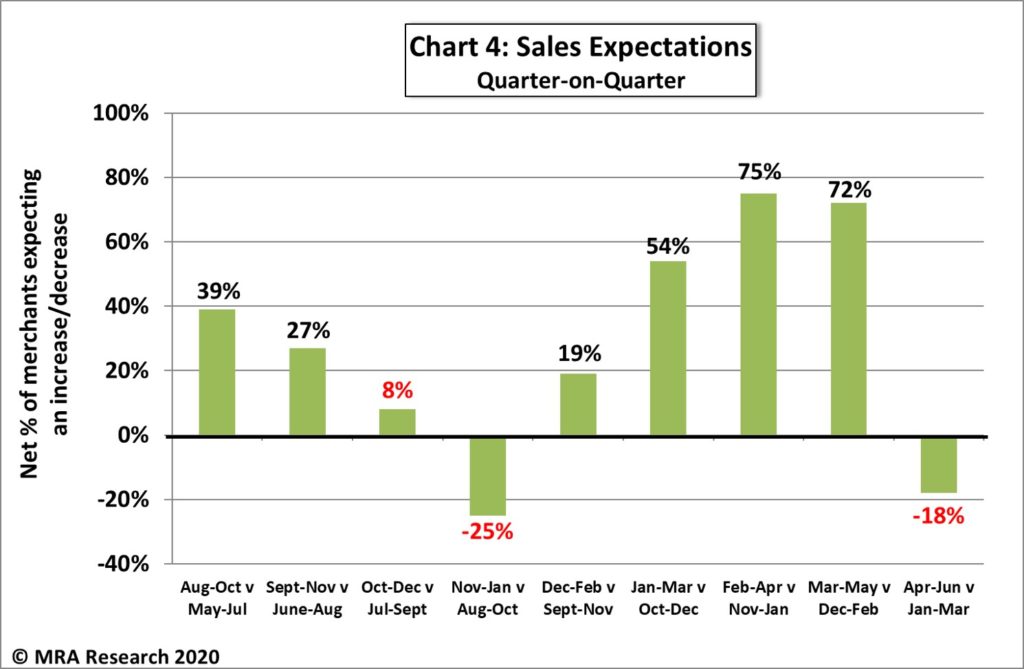 Interviewed at the end of April, builders’ merchants were anticipating a V-shaped bounce back with prospects for the next six months starting to recover sharply. Only a net -5% of merchants expect sales to drop April to September compared to the previous six months (October-March). See Chart 5.

Large branches were least positive (net -25%). Regionally there is a North/South divide with merchants in the North and Scotland being much more optimistic with a net +29% and +60% respectively expecting an improvement compared to those in the South and Midlands (net 24% and -14% respectively).

While regional merchants (net +3.5%) expect sales to improve, independents expect no change over the period. Nationals are expecting sales to drop (-16%).

Of those forecasting a sales decrease in the next six months, 30% were unable to say how bad it could be. A further 50% are expecting anything between 25% and 75%. 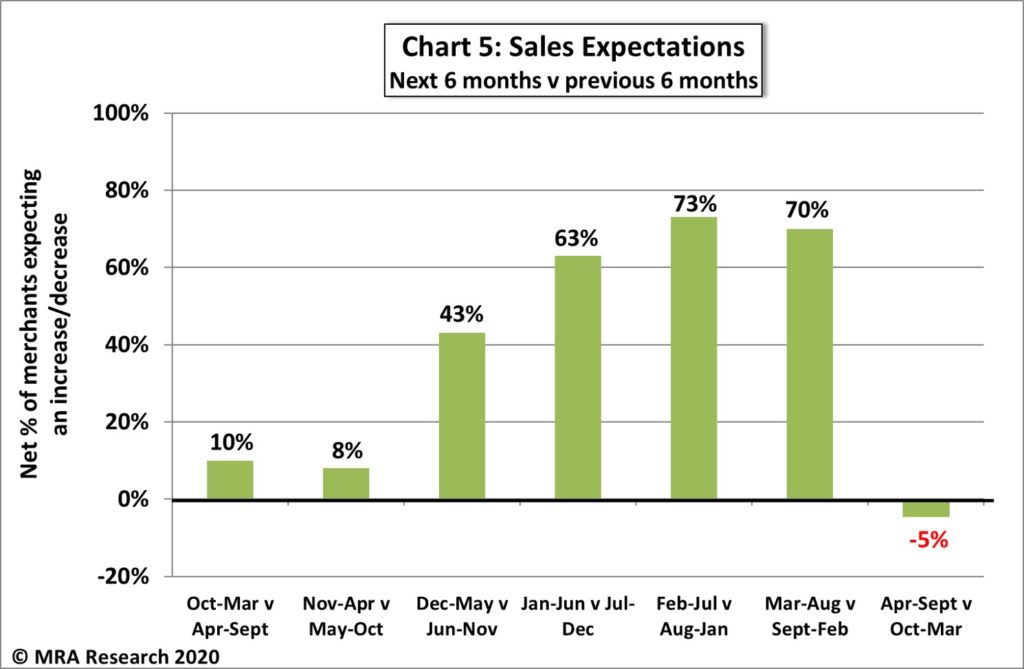 A net -19% of merchants were less confident about the market in April compared to March. Confidence was weakest among independents (-42%) and also fell significantly in small and large branches (net -33% and -27% respectively).

Year-on-year, confidence plummeted with a net -68% of merchants less confident in the market in April than in the same month last year. See Chart 6. The Coronavirus and uncertainty around its impact were obvious reasons mentioned by merchants for the sharp fall. 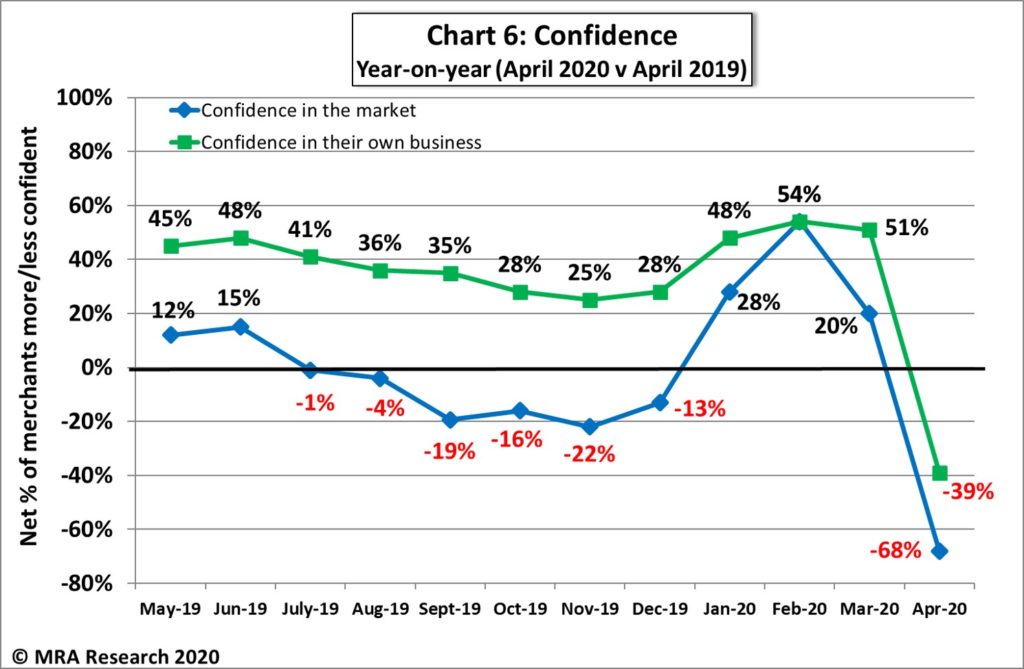 This report is the 12th survey in the series, with interviews conducted by MRA Research between 20-28 April 2020. Each month a representative sample of 100 merchants is interviewed. Due to the Coronavirus lockdown and the number of closures in April, this survey is based on a larger number of contacts (265) to establish the level of closures plus 69 completed interviews, balanced by region, size and type of merchant, including nationals, regional multi-branch independents, and smaller independent merchants.

The Pulse reports can be downloaded free from www.mra-research.co.uk/the-pulse or by calling Lucia Di Stazio at MRA Research on 01453 521621.