The BMF has welcomed AVS Fencing and Landscaping Supplies as its newest merchant member.

AVS describes itself as is one of the leading stockists of fencing, decking and landscaping materials in the South East and East of England. Formed in 1993, it currently operates from 10 locations and has over 100 team members with its branch support centre being based in Horsham, West Sussex.

The company prides itself on both its quality of service and products supplied to customers, as well as the staff development and career pathway programme. According to the business, all of these factors are vital in providing a truly sustainable and resilient business.

AVS Managing Director and former BMF Vice-Chair Stewart Pierce, said: “Having been at the forefront of the rejuvenation of the BMF, I appreciate the importance of staff career industry-specific development and training, as well as the need for a strong trade association for the industry.”

BMF Chief Executive, John Newcomb said: “We are thrilled to welcome AVS Fencing and Landscaping Supplies into membership. They are already planning to take a very active role with the BMF and clearly appreciate the value of being part of a strong trade body.

“This thriving independent merchant clearly recognises that the wide variety of training and support services the BMF offers will add value to their business as it continues to develop and grow. The BMF team look forward to working with them.”

As well as supporting its own staff, AVS is sponsoring 17 year old motorsport racer Scott McKenna, who is another step closer to the Protyre Ginetta GT5 Challenge title, following on from a brace of exciting wins at Zandvoort in July.

McKenna’s success in the Netherlands follows on from four successful UK race meetings for the teenager since the championship races started in April.

McKenna, from North Yorkshire, quickly adapted to the picturesque circuit on his maiden visit to Zandvoort where a tense trio of encounters on the track pitted the youngster against rivals Adam Smalley and Gordie Mutch.

The a battle on the circuit eventually came down to a photo finish, with McKenna achieving an incredible win by just six hundredths of a second. 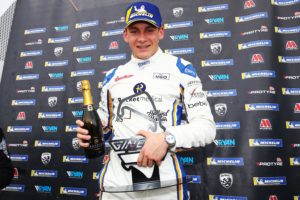 This was McKenna’s fifth win in his last eight races and means he has more victories under his belt than any other 2019 Ginetta GT5 driver on the grid. He has now extended his championship lead to 49 points.
Scott McKenna says: “It was absolutely incredible to race at Zandvoort; not only to race, but to come first in the last race of the weekend was a very surreal experience. My heroes have raced at Zandvoort and to do the same was something I’ll never forget. We won by such a tight margin and going side-by-side over the line was an experience I’ll not forget.”

AVS Managing Director Stewart Pierce comments, “We are overjoyed to support Scott at this thrilling time of his career. Everyone at AVS Fencing & Landscaping Supplies will be watching his remaining meets and willing him to extend his championship lead in Snetterton.”

With two meetings remaining, McKenna’s and his team’s focus is now on Snetterton next month, followed by the final meet at Donington Park in September.